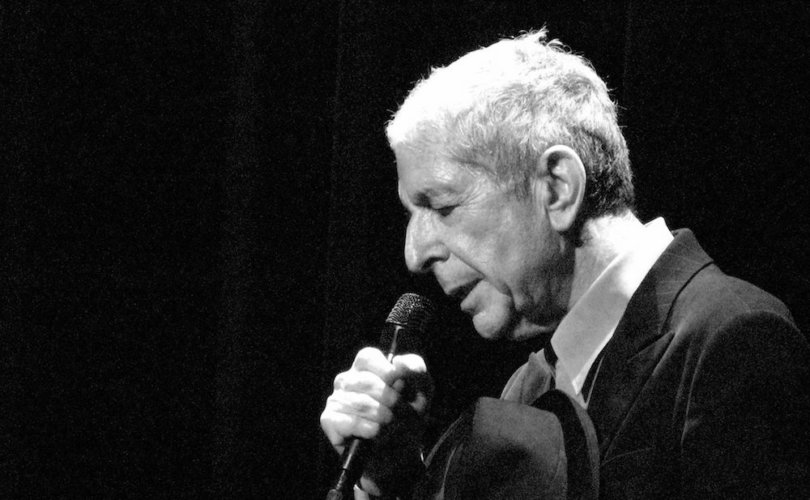 October 21, 2016 (LifeSiteNews) – With the Nobel committee’s controversial decision to award folk singer Bob Dylan the Nobel Prize for Literature, a flurry of columns and essays have erupted in a wide range of publications on Dylan’s place within the literary canon. He’s a songwriter and a poet, everyone seems to agree, but is the social commentary contained in his work profound enough to merit the award? Should singers be eligible for such a prestigious prize? And as the answers to those questions are debated, Canada’s growling poet and storyteller Leonard Cohen has suddenly found himself in the spotlight again, with much mention being made of Dylan’s apparent anointing of him as the official “number two” in the troubadour tradition.

Leonard Cohen, the 82-year-old poet, novelist, and songwriter born in Quebec and a wanderer ever since then, has long fascinated those who have attempted to categorize him. His religious journey has zig-zagged from West to East and left him with the vague mysticism favored by many of the artists of his generation. He’s never gone truly mainstream because he’s not a rock star, although he did dabble in drug culture. His treatment of religion and sexuality has always been troublesome, as he seems to simultaneously treat sexual intimacy as something sacred while excusing himself for his own “love them and leave them” approach. But where Leonard Cohen is truly fascinating is the social commentary woven through his poems, especially on an issue so controversial many refuse to touch it: abortion.

For all his many faults, Cohen is nothing if not unblinking. His work shows a clear and progressively growing disillusionment with our throwaway culture’s crude approach to everything good and beautiful, and his words often smolder with contempt. In “Stories from the Street,” he described the bankruptcy of the Sexual Revolution and its infantilizing effect on those who revelled in it:

It is perhaps somewhat ironic that Cohen wrote so fiercely against a culture that discarded women and children, especially considering some of his own short-lived romances. But when reading his searing stanzas in opposition to abortion, one almost wonders where his passion comes from. In “Diamonds of the Mind,” for example, he mourned the transformative effect of the Sexual Revolution on people:

Ah, there is no comfort in the covens of the witch,
some very clever doctor went and sterilized the bitch,
and the only man of energy, yes the revolution's pride,
he trained a hundred women just to kill an unborn child.

Such lines have attracted the ire of some of his feminist fans, who began to identify an anti-abortion ethic throughout his work. One pointed to Cohen’s “The Story of Isaac,” where he condemns those who “stand above them now, your hatchets blunt and bloody”:

You who build these altars now
To sacrifice these children,
You must not do it anymore.
A scheme is not a vision.

Another wrote that Cohen’s famous “Dance Me To The End Of Love” was suspect because of these lines:

Some girls wander by mistake
into the mess that scalpels make.

Regardless of whether the feminist heresy-hunters are correct in asserting that Cohen is hinting at an explicit anti-abortion position in such verses, it certainly reveals that they themselves are insecure in the intellectual stability of their worldview that they find any mention of life growing in the womb to be potentially antagonistic to their position. The fact that a mere mention of “children who are asking to be born” seems to trigger a twinge of guilt and that references to messes made by scalpels conjure up images of abortion in their consciences is indicative of a deep-seated discomfort with the truth about the procedure that they support: that it results in the rather messy physical destruction of a beautiful new human being.

The fact that one reviewer panned Cohen’s “Anthem” as potentially anti-abortion, for example, perhaps says more about the reviewer’s unease with the pro-choice ethic than it does about any political point Cohen is trying to articulate:

Ring the bells that still can ring
Forget your perfect offering
There is a crack in everything
That's how the light gets in.

We asked for signs
the signs were sent:
the birth betrayed
the marriage spent
Yeah the widowhood
of every government —
signs for all to see.

It is in Leonard Cohen’s apocalyptic denunciation of society and his dystopian prophecy found in the more recent offering “The Future” that we find the firmest rejection of a consumer culture that has extended its ideology of commodification even to children. His disgust is as deadpan as it is detached, but still it is unmistakable:

His crude lines are visceral and powerful, punching at apathy and painting a gruesome picture. Cohen’s art can be beautiful, but sometimes beautiful means the accurate depiction of a monster. Shallow readers might think some of his words are a celebration of hedonism, but they are badly misreading: the crack, the promiscuity, the social decay–this all leads, in Cohen’s view, “to Stalin and the Berlin Wall.” His grasp of what is unfolding across the West is more profound than most, and he sees the totalitarianism of the Sexual Revolution and the tragedy of a culture that has confused pleasure with happiness. He also sees the victims with clear-eyed sadness:

Destroy another fetus now
We don't like children anyhow
I've seen the future, baby:
it is murder.

Cohen’s vision and insight are so far removed from the jingles produced by the shallow and interchangeable faces of today’s musical marionettes that his words become riveting. Cohen sees more than most poets, and certainly more than most musicians. He sees the ugliness lurking just beneath the buzz of the mad pursuit of pleasure, and he sees the bloody hangover in the haze of the horizon. His lines bemoan the loss of innocence, and he conjures up the image of tiny humans in trash bins on street corners, and he warns us that innocence discarded leads to innocents destroyed.

And though he is not a Christian, at one point in his dystopian vision there is a crack, and the light gets in: The choice that stands before the world, he writes, is “Hiroshima or Christ.”