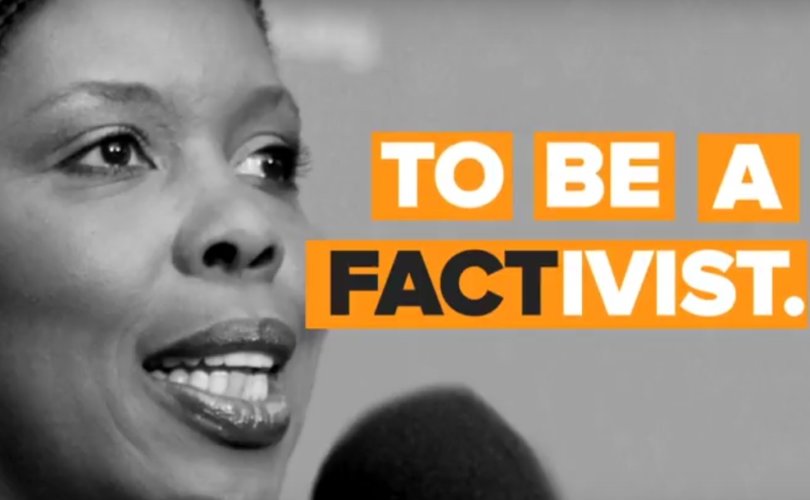 July 27, 2016 (LifeSiteNews) — Millennials are often praised for their willingness to become activists for a cause. It’s laudable that people choose action over apathy. But there are dangerous consequences when we act without facts.

However, in a sound-bite world where few choose to savor the meatier substance of truth, it’s scary how ill equipped many are with buzzwords and bumper sticker mantras. If only technology were advanced enough for us to have no excuse to be manipulated by the gatekeepers —mainstream media, public education, politicians, and even some pastors. If only there were a device that were smart enough to be both a phone and a computer that could access more data than ever before in human history. Hmmmm …

I mean, obviously, that kind of well of information couldn’t possibly exist. Do people really think that there is an epidemic of police killing blacks in this country? Do people really think transgender people are the victims of widespread acts of homicide? Do people really think Planned Parenthood is the only healthcare option for women? We would know if we just bothered to do our own fact-checking. We could bypass much of the emotional propaganda and get to the heart of today’s issues if people spent less time getting opinions from Comedy Central and more time considering the evidence.

There’s a lot of talk about vulnerable communities being targets of the more powerful. There is no group more vulnerable and less powerful than the unborn. But our society has shown that senseless violence is okay if we can dress it up in “equality” euphemisms so we can hide the mutilated trafficked aborted body parts, right Cecile Richards?

Nowhere is victimhood more invoked than in the pro-abortion LGBTQ activist community. In the debate about binary biological gender (as if it doesn’t exist), our nation is embroiled in a false debate about access to bathrooms. Everyone has access to bathrooms. In denouncing common sense legislation, LGBTQXYZ organizations promote the lie that there is an epidemic of murders of “transgenders,” blaming it on “hate”. All homicides are tragic, but we’re talking about 11 people in one year — 2014 (according to GLAAD, which cites an LGBT source that doesn’t cite the FBI). According to the FBI, there were 11,961 homicides that year. That would mean 0.1 percent of this total are (allegedly) among “transgender” people … which matches the exact representation in the population. Of course, there is no data that says why these human beings were killed or who killed them. (LGBT media touts that this number has doubled in 2015 to 22 people despite the fact that the FBI hasn’t released all 2015 homicide data yet or documentation as to motive is virtually nonexistent.) Just like pro-abortion radicals, it’s never about the truth. It’s about advancing an agenda, no matter the lie.

Speaking of lies … #BlackLivesMatter has become a powerful force. Even noted evangelical colleges, organizations and respected leaders like John Piper have chosen to give the Gospel reassignment surgery to justify the theological acrobatics it takes to embrace such a movement. We’re called to “love one another” … not love the lie. When any of these people can tell me, without Googling it on their smartphone, the name of just one of the 247 white people (as of July 27) who were killed by police so far in 2016, perhaps they can disprove my point that there is a false and destructive racial narrative being fed to the public.

But we’re a society who doesn’t want to be bothered by the facts. They get in the way of our emotions. As a Christian, I believe in being driven by love and compassion. That never negates needing to know what’s really going on. Bitterness, anger, and division are only compounded by emotions unchecked by the truth.

Ephesians 4:14 says: “Then we will no longer be immature like children. We won’t be tossed and blown about by every wind of new teaching. We will not be influenced when people try to trick us with lies so clever they sound like the truth.” This is exactly what’s happening today. We hear lots of accusations and blame, but few calls for and acts of forgiveness (like we saw beautifully displayed after the massacre in a Charleston, SC church). None of these issues our culture grapples with can experience healing without forgiveness. Ephesians 4:31-32 continues with the Divine prescription: “Get rid of all bitterness, rage, anger, harsh words, and slander, as well as all types of evil behavior. Instead, be kind to each other, tenderhearted, forgiving one another, just as God through Christ has forgiven you.”

Today’s activism is often reckless and baseless, perpetuating pain and forcing people to choose sides. I always want to be on the side of Truth. Ephesians 4:11 — the foundation verse for the organization my wife and I co-founded (The Radiance Foundation) — is what compels us to illuminate the truth in creative and uncompromising ways. “Have nothing to do with the wicked deeds of darkness but rather expose them.” These are the words that challenge me to be a factivist, no matter how inconvenient or unwanted those facts may be.

Silence on these culture-shifting issues only allows people to remain shackled. There is freedom. We just have to be willing to find it beyond the emotion, rooted deeply in Truth that will fight relentlessly, and peacefully, to set us free.