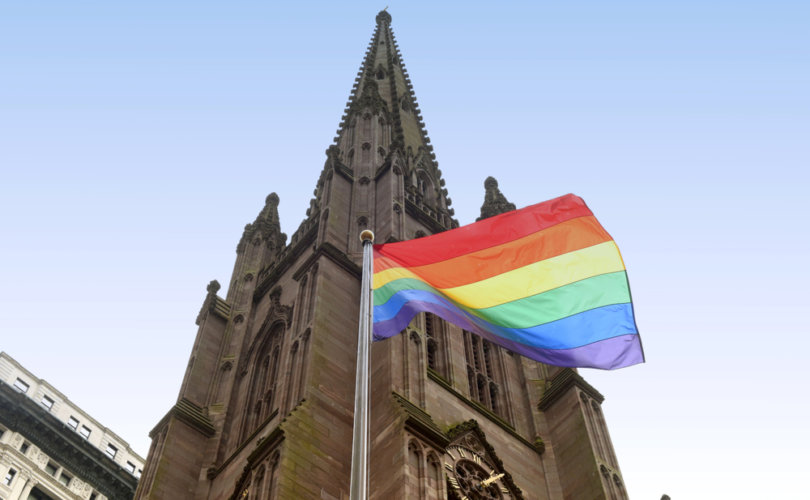 (LifeSiteNews) — The Catholic Church in Germany is facing another push by LGBT activists to eliminate “outdated statements of church doctrine” on sexuality and gender in what they call the “OutInChurch” initiative, spearheaded by 124 church administrators, teachers, volunteers, and even priests who have publicly identified as “queer.”

Seven demands were published on social media, all oriented toward the elimination of “discrimination” against LGBT people by the Catholic Church. They ask that doctrines held for the entire history of Christianity be removed based on “theological and human-scientific findings.”

The media, of course, promptly covered this story as if there is a real possibility that the Catholic Church will actually change its position, which it will not. It is true that the current pontiff appears determined to get as close to the line as possible, encouraging LGBT activists working within the Church to subvert traditional teaching on sexuality, but no formal change in teaching will take place.

Nonetheless, activists have been encouraged by their success in colonizing mainstream Protestant denominations and completely conquering the Church of England, and there are enough wobbly Catholic clergy to make these campaigns worth their time.

There’s one particular detail of this story that I’d like to draw your attention to: The weaponization of personal identity. This is not a new insight, and it’s not my insight — but it’s worth noting again. If there was simply another LGBT group calling on churches to change their doctrine, it wouldn’t be much of a story. Nobody would pay much attention. But when the initiative is spearheaded by people who are self-identifying as LGBT — that changes the dynamic.

Suddenly the manufactured story is Powerful Old Bigoted Institution against Poor Persecuted Gay People. These LGBT activists have constructed a David and Goliath story, casting themselves in the role of David.

It is, essentially, playing chicken with the church hierarchy — are you going to tell all these queer people in your institution who feel targeted by the doctrines that have been there since its very beginning that they are not welcome, or are you going to rewrite the Bible?

In short, the victimhood status projected by the “brave” and “courageous” coming out is a strategic move to present traditionalists as wicked persecutors. This is what one pundit accurately dubbed as “cry-bullying.” Claims of being a victim automatically put you in the position of cultural power.

It is an extremely effective tactic, and it is important that we recognize when it is being used. The manipulation of human empathy has worked very well for the sexual revolutionaries, and it has resulted in the collapse of many mainline denominations who believe that love is defined as telling people what they want to hear rather than what they need to hear.

Those of us who still hold to truth as defined in Scripture must respond by explaining what love actually is — wanting the other’s good — and refusing to cede the ground of compassion to our opponents. Self-identification as a culture war tactic is very clever. We must be wiser than that.