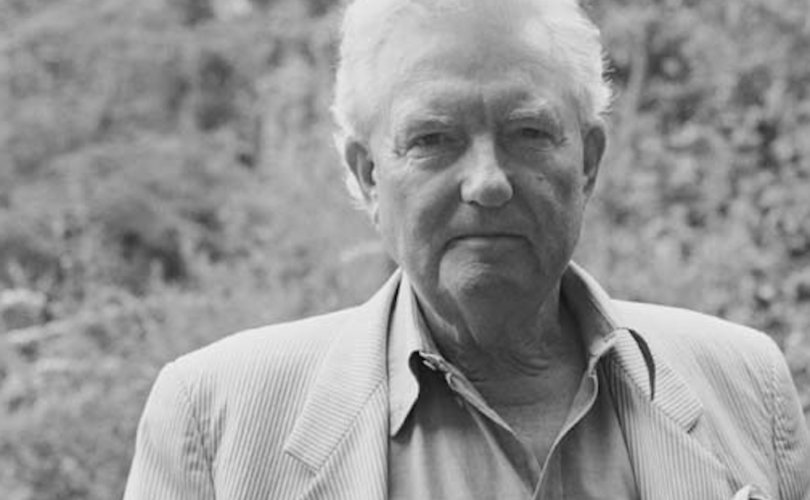 August 7, 2017 (LifeSiteNews) — The British press has been leading the LGBTQ celebration of the 50-year anniversary of Great Britain’s repeal of its anti-sodomy law, with all the predictable hurrahs that have come to characterize the media’s sycophantic coverage of the unnatural sex-and-gender movement.

One Brit not drinking the lavender Kool-aid is eminent conservative historian Paul Johnson, who has a much different take on his nation’s sodomy repeal. Johnson describes below the destructive incrementalism by which the entire LGBTQ (lesbian, gay, bisexual, transgender, queer) grew in power in the U.K. and continues to advance across the world to this day.

In his 1996 book, The Quest for God: A Personal Pilgrimage, Johnson gives a tutorial of sorts for moral-minded peoples and less “enlightened” (mostly non-Western) nations on how the LGBTQ movement cunningly achieved its rapid gains. Each agenda goal would begin with small, seemingly harmless steps done with noble intentions in the name of “progress” and compassion. The end-game, as we now know, was a secular-values “revolution” bitterly hostile and threatening to both Christianity and genuine liberty.

What seemed like a common-sense reform of an antiquated law in 1967 was actually the first step in the meteoric rise of intolerant, obnoxious homosexual power in Britain:

“Thus we began by attempting to right what was felt an ancient injustice and we ended up with a monster in our midst, powerful and clamouring, flexing its muscles, threatening, vengeful and vindictive towards anyone who challenges its outrageous claims, and bent on making fundamental – and to most of us horrifying – changes to civilised patterns of sexual behavior.”

Note below that Johnson correctly describes homosexuality as a “great moral evil,” something with which even many of today’s Bible-professing Christians — neutered by political correctness and decades of “gay” propaganda — would have a hard time agreeing, to their shame.

Johnson wrote all of this before the rise of homosexual “marriage” and ubiquitous “transgender” activism, the promotion of which is the latest media fad. Sodomy-based “marriage” was legalized in the U.K. in 2014 and, on the other side of the Atlantic, effectively imposed on all 50 states by the U.S. Supreme Court in its 2015 Obergefell v. Hodges decision. (Maryland and a few other states had already had voted to legalize “gay marriage” and others such as California had it forced upon them by judges prior to Obergefell.)

Johnson brilliantly describes how the LGBT sin movement’s advance – like an insatiable, devouring monster — corrupts people and cultures, and displaces virtue with man-centered notions of a moral wrong as a “civil right” (see Isaiah 5:20).

Johnson “Monster in our Midst” passage

The following is an excerpt from Johnson's The Quest for God: A Personal Pilgrimage (pages 28-29). Emphasis is added in bold and we have kept the British spellings. For readability, we have broken in half the paragraph beginning, “I believe…”]:

The following passage begins after a section in which Johnson discusses radical, worldly movements – race, sexual, environment and health politics — that collectively present an alternative to God and traditional religion:

“The radical agenda … with its strong appeal to the idealistic, as well as the materialistic, instincts of mankind, especially among young people, does constitute an alternative religion. Like any other form of humanism, it replaces God by man, and the welfare – or supposed welfare – of man, rather than the worship of God and obedience to his commandments, as the object of human existence and the purpose of society. That, of course, is its defect. The Jesuit theologian Karl Rahner once argued that it is the consciousness of God, the acceptance that there is power outside and above ourselves, to whom we owe allegiance and whose guidance we must follow, which essentially distinguishes mankind from other creatures. If belief in God were ever to fade completely from the human mind, we would not, Promethean-like, become masters of our fate; on the contrary, we would descend to the status of very clever animals, and our ultimate destiny would be too horrible to contemplate.

“I believe this argument to be profoundly true, and corroborated by history, and what worries me about the new radical agenda is the danger that it will dehumanise man just as the totalitarian alternatives did, though no doubt in rather different ways. But there are further, related objections. All the items on the agenda lend themselves to extremism. Take, for instance, the issue of homosexuality, an important part of the sexual politics item. There were many of us, in the 1960s, who felt that there were grave practical and moral objections to the criminalisation of homosexuality, and who therefore supported, as happened in most Western countries, changes in the law which meant that certain forms of homosexual behavior ceased to be unlawful. Homosexuality itself was still to be publicly regarded by society, let alone by the churches, as a great moral evil, but men who engaged in it, within strictly defined limits, would no longer be sent to prison. We believed this change to be the maximum homosexuals deserved or could reasonably expect.

“We were proved totally mistaken. Decriminalisation made it possible for homosexuals to organise openly into a powerful lobby, and it thus became a mere platform from which further demands were launched. Next followed demands for equality, in which homosexuality was officially placed on the same moral level as standard forms of sexuality, and dismissal of identified homosexuals from sensitive positions, for instance in schools, children’s homes, etc., became progressively more difficult. This was followed in turn by demands not merely for equality but privilege: the appointment, for instance, of homosexual quotas in local government, the excision from school textbooks and curricula, and university courses, passages or books or authors they found objectionable, special rights to proselytise, and not least the privilege of special programmes to put forward their views – including the elimination of the remaining legal constraints – on radio and television. Thus we began by attempting to right what was felt an ancient injustice and we ended up with a monster in our midst, powerful and clamouring, flexing its muscles, threatening, vengeful and vindictive towards anyone who challenges its outrageous claims, and bent on making fundamental – and to most of us horrifying – changes to civilised patterns of sexual behavior.

“Here indeed we have sexual politics in action. And, as with other alternatives to God, the result is not human happiness, but human misery. The homosexual community, as they now styled themselves, by their reckless promiscuity during the 1970s and 1980s, helped to spread among their members the fearful scourge of AIDS, a killer disease of a peculiarly horrible nature, for which there is no cure, and no immediate likelihood of a cure … ”