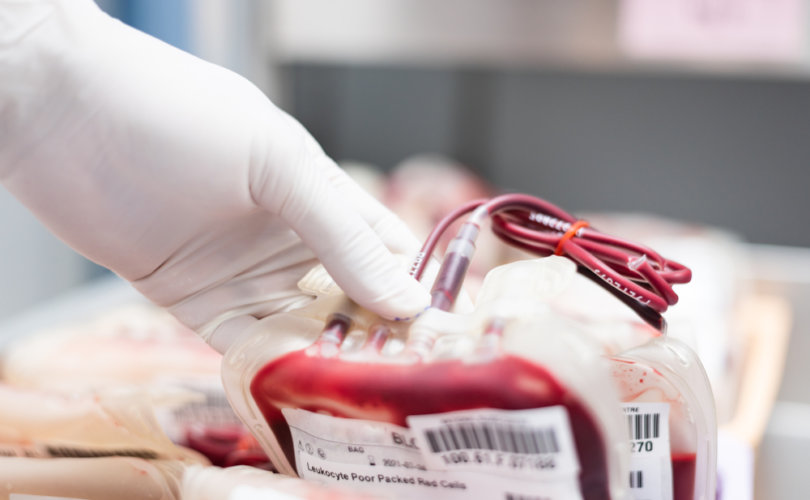 March 21, 2019 (LifeSiteNews) – Van Levy is a 31-year-old balding and bearded man from San Diego. At least, according to his picture and your eyes, he is. These days, you are supposed to disbelieve what you actually see and instead put on the ideological blinders helpfully provided by the LGBT elites, which will help you to see precisely what you are allowed to see.

According to Van Levy, he has no gender at all, instead identifying as the mythical category of “non-binary,” which roughly translates to “neither.” The state of California, like 8 other states, has decided to permit an “X” option on their government identification rather than the simple “M” or “F” for male or female. Van Levy has chosen to reject so-called traditional categories, and additionally does not use any pronouns at all.

Now, we could ignore all of this and let Van Levy live his delusions if it were not for the fact that he is attempting to force his game of make-believe on everybody else.

In this specific case the mainstream media is reporting that Van Levy is upset because although he has donated blood regularly for the past 13 years when he asked the San Diego Blood Bank about donating, he got “this whole runaround on the phone.” The reason was simple and understandable. “They kept wanting me to just come in and see the paperwork and go from there,” Van Levy complained. When he refused, they said no. Obviously, blood banks do not have a non-binary category because there is no such thing as non-binary blood, and for medical reasons, the paperwork has to be filled out according to biological reality.

But of course, the media portrayed Van Levy’s stubbornness as the martyrdom of a “non-binary” person. “Being able to give back to my community, give back to humanity, is always something that’s vital for me,” Van Levy nobly told NBC News, ignoring the fact that he was targeting a blood bank on national news. “There shouldn’t be any reason why I shouldn’t be able to be here more so than somebody else. I don’t need blood, and they do.” The blood bank, which would not confirm the details blasted out by Van Levy, did admit that they have not figured out how to deal with so-called “non-binary donors” yet. “We will be seeking guidance from the FDA and our accrediting body,” spokeswoman Michele Corbett told the media via email. “We appreciate all individuals who seek to save a life through blood donation.”

What blood banks do not appreciate is being asked to play along with the games of people pretending they have no gender at all. The Food and Drug Administration (FDA) recommends that each blood donor simply choose between male or female. In other words, if Van Levy donated blood for thirteen years and donating blood is so essential to him, it would be lovely if he could just tick off the gender box he’d been using for over a decade before he decided to publicly attack a blood bank with much better things to do than refusing to recognize a scientifically invalid gender category that has genuine medical ramifications. Megan McSeveny of the FDA “said the agency requires certain data for the safety of the donor and recipient” because “health criteria differ depending on gender.”

The LGBT war on blood banks is not new. Activists are still attempting to have the FDA’s screening procedures changed, as men who engage in genital acts with other men have to wait a full year after homosexual acts before becoming eligible to give blood due to the accompanying heightened risk of HIV infection. LGBT activists insist that creating procedures based on reality is bigoted and “stigmatizes” gay men, and that all blood donations are screened for HIV anyways, thus making additional screening unnecessary. You’ll notice that the safety of those receiving the blood is very emphatically not their concern here. Additionally, Cecilia Chung of the Transgender Law Center says that it is “discriminatory” to ask people their gender before donating blood because “blood plasma doesn’t have a gender.”

And predictably, the National Center for Transgender Equality says that Van Levy’s case “demonstrates why the health care system is in need [of] updating to account for trans and non-binary people.” In fact, director of policy Harper Jean Tobin told NBC News that Van Levy’s public attack on the San Diego Blood Bank is “yet another unfortunate example of why plasma donation systems must be modernized to ensure equal and fair treatment without stigma or prejudice.” Many transgender activists have been targeting a variety of institutions, and Van Levy mourned to the media that being non-binary caused endless problems: “Even my own passport isn’t going to acknowledge my identity. When the law had changed, and I went in multiple times to the DMV, they told us that they haven’t updated their system yet. When I went to go get my social security to get that updated at the time, they didn’t have that available.”

There are many people who feel that we should simply ignore the transgender, gender fluid, and non-binary phenomenon currently galloping through our dying civilization. But unfortunately, the LGBT activists are not planning to live and let live. They are planning to utterly transform society to align with their whims. They want schools to teach their ideologies, libraries to host drag queens reading to children, politicians to show up and bow the knee at their obscene parades, airline agents to unquestioningly allow people who do not match their IDs to board flights, and medical institutions to discard science in favor of LGBT propaganda.