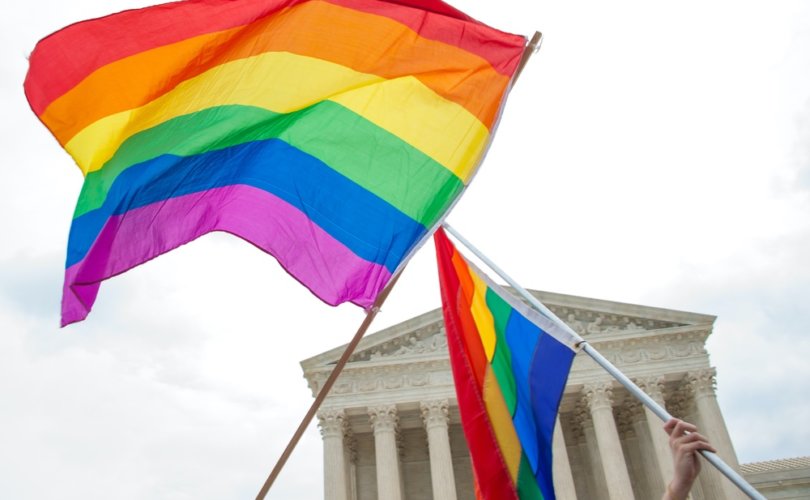 December 4, 2019 (LifeSiteNews) — A manifesto detailing the strategies transgender lobbying organizations have used to rapidly gain political power and unheard of cultural influence also provides insight into how the western world suddenly finds itself kowtowing to the extreme demands of trans ideology.

The title alone is alarming: “Only Adults? Good Practices in Legal Gender Recognition for Youth.” Although the slick 64-page document deals with specific practices and tactics that have proved successful for expanding transgender policies and power in a general way, it primarily focuses on how to hand power to children to declare whatever gender they choose while squashing parental authority and concern.

Over the years, progressives who seek to fundamentally change society have diligently developed strategies that win. They don’t promote ideas that win on their own merit; in fact, they have had amazing success promoting ideas that most people would normally reject. As this newly published document demonstrates, LGBT activists rely on stealth, behind-the-scenes efforts that do an end run around public discourse and legislative processes, resulting in new laws, new regulations, and the untenable demands of the “woke” culture that are increasingly overtaking government at every level.

How has transgenderism taken hold so quickly?

“A great deal of the transgender debate is unexplained,” observed James Kirkup, in an article penned for The Spectator UK about the document. “One of the most mystifying aspects is the speed and success of a small number of small organisations in achieving major influence over public bodies, politicians and officials.”

“How did we get here?” asked Kirkup. “How has a certain idea taken hold in so many places so swiftly?”

Eleven “techniques” promoted in the manifesto explain how. Here are a few:

‘Get ahead of the government agenda’

In many of the NGO (Non-governmental organization) advocacy campaigns that we studied, there were clear benefits where NGOs managed to get ahead of the government and publish progressive legislative proposal before the government had time to develop their own.

NGOs need to intervene early in the legislative process and ideally before it has even started. This will give them far greater ability to shape the government agenda and the ultimate proposal than if they intervene after the government has already started to develop its own proposal. Where NGOs fail to intervene early, the ultimate gender recognition legislation may be far less progressive than activists would like.

‘Get ahead of the media story’

There is a real risk that where advocates fail to intervene early, sensitizing the media and the public to trans rights in general and legal gender recognition in particular, persistent negative and pernicious narratives about the trans rights agenda may take hold in the public imagination which will negatively influence the legislative process and the prospects for success.

In Ireland, Denmark and Norway, changes to the law on legal gender recognition were put through at the same time as other more popular reforms such as marriage equality legislation. This provided a veil of protection, particularly in Ireland, where marriage equality was strongly supported, but gender identity remained a more difficult issue to win public support for.

Another technique which has been used to great effect is the limitation of press coverage and exposure. In certain countries, like the UK, information on legal gender recognition reforms has been misinterpreted in the mainstream media, and opposition has arisen as a result.

Many believe that public campaigning has been detrimental to progress, as much of the general public is not well informed about trans issues, and therefore misinterpretation can arise.

Activists are advised to decouple “legal gender recognition” and “medical treatment or diagnosis” because the public often finds affirmative trans hormone regimens and irreversible genital surgeries troubling, especially when it comes to children. In this way:

Minors may be more likely to be able to access the processes, as one of the reasons often cited by opponents and critics in such countries for denying such access to minors is that young people should not have irreversible surgeries until they are of the age of maturity. Activists have sought to educate the public that legal gender recognition is a purely civil process.

Trans activism relies on the cowardice of the majority

“Is it surprising that activists rely on the ignorance of the media and general public to push their agenda?” asked National Review’s Madeleine Kearns. “Not really, when you consider how obviously dangerous and wrong that agenda is. But there’s more to it. As is most often the case, the success of a tyrannical minority depends on the cowardice of the majority. Not on their action, but on our inaction.”

“As is often the case, the corruption of our social institutions does not occur solely on account of a tyrannical minority,” she continued. “Rather, this minority is aided and abetted by a silent majority who cling to comfort and distraction as others suffer in plain sight. But our excuses are wearing thin. This isn’t a fringe issue. This isn’t going away by itself. And people in positions of influence, having fallen asleep, risk waking up from this nightmare in a world they don’t recognize.”

The trans lobby hides its efforts ‘behind a veil,’ and with good reason

“A major international law firm has helped write a lobbying manual for people who want to change the law to prevent parents having the final say about significant changes in the status of their own children,” noted Kirkup, summarizing his thoughts about the manifesto. “That manual advises those lobbying for that change to hide their plans behind a ‘veil’ and to make sure that neither the media nor the wider public know much about the changes affecting children that they are seeking to make. Because if the public find out about those changes, they might well object to them.”

Normally, anyone who wants to change the law accepts that to do so they need to win the support or, at least, the consent of the people whose authority ultimately gives the law its force. The approach outlined, in detail, in the Dentons report amounts to a very different way of lobbying to get the laws and policies you want. Even more notably, it suggests that in several countries people have been quite successful in lobbying behind a ‘veil’ and in a way that deliberately avoids the attention of the public.

Kirkup believes the stealth strategies outlined in the manifesto are the wrong way to go about changing society and are ultimately doomed to failure.

“No policy made in the shadows can survive in sunlight,” he concluded.