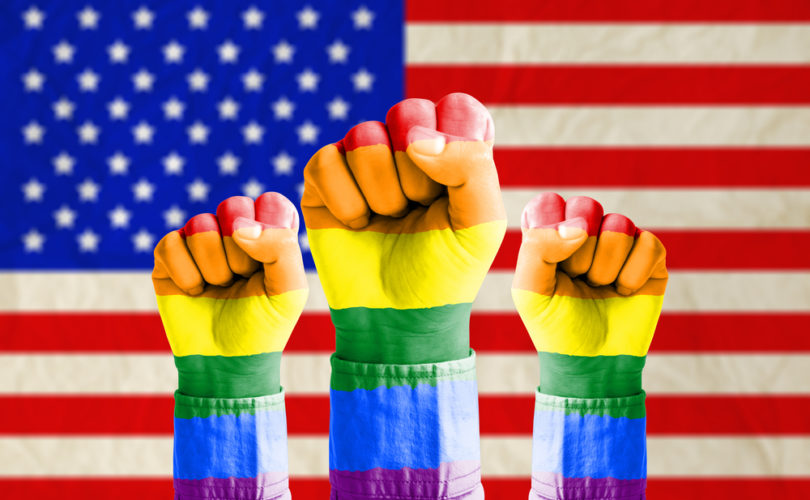 February 5, 2018 (LifeSiteNews) – Acceptance of “LGBT” people – which had experienced a dramatic upswing in recent years – has peaked and begun to decline according to a report unveiled by the LGBT media advocacy group GLAAD.

The GLAAD report, based on a Harris Poll, set off loud alarm bells, sirens, and flashing lights in gay and mainstream media. One headline trumpeted, “Shocking report finds acceptance of LGBTQ people is rolling backwards in the age of Trump.”

“In a single year, we’ve seen significant declines from what had been an increasingly accepting America to one now less supportive,” Harris Polling said in a statement from a GLAAD press release, adding, “this lost ground of acceptance cuts across many in American society.”

In last year's report, 53 percent of Americans said they were “very” or “somewhat” comfortable with LGBT people. This year, that figure dropped four points to 49 percent, nearly an 8% decrease.

LGBT, Inc. is scared. As it turns out, LGBT, Inc. was prematurely condescending, not unlike Cinderella’s step sisters before the ball.

Yet the results should come as no surprise.

The mirage is fading

The normalization of homosexuality, same-sex marriage, and now transgenderism always relied on the power of political correctness to manufacture consent at unreal, unsustainable levels.

It is a mirage – a grand illusion – created not by the hearty endorsement of this country’s majority, but by its silence.

In the age of Obama, political correctness beared its sharp teeth, silencing all who held opinions in opposition to any and every part of LGBT ideology.

Journalists, academics, politicians, and jurists harnessed the power of political correctness and were rewarded with heaps of praise and affirmation for demonstrating their fidelity to progressive forces.

Corporations were happy to jump on the “right side of history” bandwagon.

Those who resisted were dealt swift punishments for daring to disagree with untenable notions such as same-sex marriage and transgenderism. Just ask Colorado’s Jack Phillips, owner of Masterpiece Cakeshop, whose fate now rests in the hands of nine United States Supreme Court justices, or Washington state’s Barronelle Stutzman proprietor of Arlene’s Flowers, or a host of other bakers, florists, photographers, tee-shirt manufacturers, farm stand proprietors, and restaurant owners.

Even heads of large corporations such as Mozilla CEO Brendan Eich, and, quite literally, brain surgeons – such as world renowned pediatric neurosurgeon Dr. Ben Carson, now Secretary of Housing and Urban Development – were not immune to the crushing retribution of LGBT, Inc.

Beyond that, the public has been fed a steady diet of propaganda. Fake news and fake science were served as main courses.

In 2015, “when a major study published in Science, which purported to show that personal canvassing by LGBT people had an amazingly large effect on people’s opinions,” reported National Review’s Maggie Gallagher, it “was revealed to have been entirely faked, and in ways that one lone grad student, David Broockman, found easy to debunk. (The ‘scholar’ had even created easily checked fake grants from real foundations, thanking them publicly for grants they had never made.)”

More recently, a study by a Columbia University researcher asserting that minority stress is causing gays to die a full 12 years earlier than straights has been debunked. The study’s authors said when it was released, “the results of this study suggest a broadening of the consequences of prejudice to include premature death.”

The press loved the story, and so headlines blared, “Can Prejudice Kill You? Lesbian, Gay, Bisexual Life Expectancy Drops 12 Years in Anti-Gay Communities.”

To date, the study, Structural stigma and all-cause mortality in sexual minority populations, has been cited over 100 times in professional journals, according to Clarivate Analytics’ Web of Science.

Yet it wasn’t true. It wasn’t science; it was junk. The results of the study have proven to be unreplicable, and a retraction is most likely forthcoming.  But only after much damage has been done.

That fake claim was part of the grand illusion.

Recently a gay man, Chad Felix Greene, wrote at The Federalist that the reported spike in anti-LGBT homicides is fake news: “LGBT media outlets are alarmed over a report that anti-LGBT homicides doubled in 2017, but the context of the crimes suggests the hype may be overstated.”

“On closer examination it appears that 4 of the 52 cases in 2017 were possibly anti-LGBT driven,’ Greene analyzed, “and yet the headlines will continue to shout an 86 percent increase in anti-LGBT hate crimes. The more the LGBT media manipulates the narrative to perpetuate politically convenient fear, the less average Americans will appreciate true violence towards the gay and transgender community. This unethical behavior in journalism and advocacy organizations only harms the people it is attempting to protect.”

“The mainstream media has no other explanation than, well, Trump, and a culture more tolerant of intolerance,” he said. “But no one seems to notice the profound shift in the tone and substance of advocacy for gay equality in recent years, and the radicalization of the movement’s ideology and rhetoric.”

Sullivan says that since the U.S. Supreme Court established same-sex “marriage” in 2015:

As many of us saw our goals largely completed and moved on, the far left filled the void. The movement is now rhetorically as much about race and gender as it is about sexual orientation (“intersectionality”), prefers alternatives to marriage to marriage equality, sees white men as “problematic,” masculinity as toxic, gender as fluid, and race as fundamental. They have no desire to seem “virtually normal”; they are contemptuous of “respectability politics” — which means most politics outside the left. Above all, they have advocated transgenderism, an ideology that goes far beyond recognizing the dignity and humanity and civil equality of trans people into a critique of gender, masculinity, femininity, and heterosexuality. “Live and let live” became: “If you don’t believe gender is nonbinary, you’re a bigot.” I would be shocked if this sudden lurch in the message didn’t in some way negatively affect some straight people’s views of gays.

“The left’s indifference to religious freedom,” added Sullivan, “has also taken a toll.”

Sullivan concluded that the Trump presidency isn’t solely to blame for the stunning reversal in LGBT, Inc.’s acceptance: “It’s also fueled by a reaction of many ordinary people to the excesses of the social-justice left — on immigration, race, gender, and sexual orientation.”

Pundits in LGBT news outlets are also beginning to understand that LGBT, Inc. has overplayed its hand, and are willing to admit that identity politics sank Hillary Clinton’s presidential campaign ship in 2016.

“Hillary Clinton was at her best and most uplifting when she spoke about American interests in world affairs and how they relate to our understanding of democracy,” Columbia professor Mark Lilla wrote in the New York Times shortly after Clinton’s defeat.

“But when it came to life at home, she tended on the campaign trail to lose that large vision and slip into the rhetoric of diversity, calling out explicitly to African-American, Latino, L.G.B.T. and women voters at every stop,” wrote Lilla. “This was a strategic mistake. If you are going to mention groups in America, you had better mention all of them. If you don't, those left out will notice and feel excluded.”

Don’t forget: Candidate Clinton was speaking to an audience full of gay and lesbian donors when she called Trump supporters “deplorables,” because they are “racist, sexist,” and “homophobic.”

Now in the age of Trump, when political correctness is losing its stranglehold on America, people are beginning to again feel free to assert their strongly-held personal beliefs (which are held in contempt by LGBT, Inc. and its progressive collaborators).

The grand pretension crafted by LGBT, Inc. had reached an unimaginable level of grandiosity. The illusion has been so successful that folks on Main Street overestimate the size of the gay and lesbian population to a stunning degree.

Gallup reports that the American public believes, on average, that 23% of Americans are gay or lesbian, when in fact only about 1.7% are. That’s fourteen times (1,400%) the actual number of self-identified gays and lesbians. And what is the actual number of self-identified transgendered persons? Less than three one-thousandths (0.003) of the population of the United States – just 700,000 people, fewer than the population of Columbus, Ohio.

Now that illusion is coming undone.

What will Main Street America do when it finally sinks in that it has been propagandized, and that instead of one out of four of their neighbors being gay, less than two out of 100 are? And what will happen when Main Street folks realize that gays, always portrayed as exceedingly fun, funny, and cool on TV and in movies, are really mean bullies out to destroy your life and livelihood if you refuse to bake them a cake?

In a stunning display of irony, underscoring the fact that LGBT, Inc. has arrogantly overplayed its hand, GLAAD’s annual report on gay and transgender approval is titled “Accelerating Acceptance.”

LGBT, Inc.’s acceptance is no longer “accelerating.” It is sliding back down the hill it climbed so quickly over the last few years, desperately searching for the emergency brake.