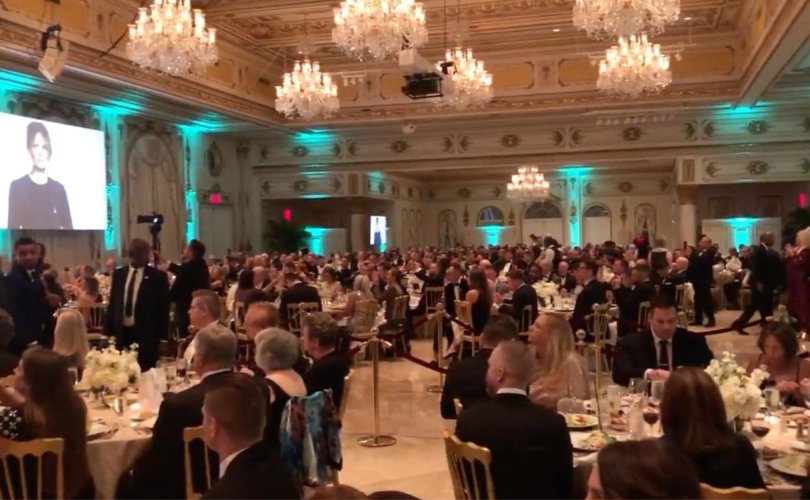 (LifeSiteNews) — On Saturday, major LGBT events on the Atlantic and Pacific coasts served to highlight the substantial rise of the normalization of homosexuality and transgenderism in institutions that were once regarded as bastions of conservatism.

Earlier that day at a San Diego shipyard, the U.S. Navy launched its newest ship, named after homosexual pederast Harvey Milk. The Secretary of the Navy and assorted admirals watched as a middle-aged transgender Navy veteran — a man who presents himself as a woman — christened the vessel. Two weeks earlier another gender-confused male was made a 4-star admiral.

Last weekend also capped a month of important national conservative gatherings where men “married” or “engaged” to or otherwise sexually and romantically partnered with other men were featured speakers.

Earlier in October, conservative podcast host and The Daily Wire writer Spencer Klavan was featured at a summit focused on the importance of classical learning for high school students alongside Princeton Professor Robert George, University of Dallas Professor Jessica Hooten Wilson, and other legendary conservative Catholic educators. Klavan is “engaged” to a man who also works for The Daily Wire.

Then on Monday, the founding of a new institution of higher learning, The University of Austin, whose core purpose is “the intrepid pursuit of truth” aimed at “human flourishing,” was publicized to much fanfare. While the school will boast a stellar conservative and Christian faculty, it also counts two famous gay commentators — high profile males “married” to males — among its ranks: Andrew Sullivan and Jonathan Rauch. Both played huge roles in the promotion of same-sex “marriage” in the years leading up to the Supreme Court’s Obergefell decision.

This raises the question: How will The University of Austin teachers and influencers inspire “the intrepid pursuit of truth” when the very public personal lives of its charter staff display a defiant, outright rejection of the most basic of observable, immutable truths: complementarity?

And how will “human flourishing” be promoted when LGBT influence has only served to disassemble the nuclear family, robbing children of life with both a loving mother and father?

All of these recent landmark events, whether wittingly or unwittingly, give the appearance of approval of homosexuality and same-sex marriage within conservative, Catholic, and Christian circles.

The message is clear: Establishment Republicans have fully embraced homosexuality and genderless marriage, while conservative academic elites appear to now greet their “married” gay and lesbian colleagues with nothing more than a shrug of the shoulders.

Matt Walsh was a bit off the mark when he dismissed the Florida gathering simply as an example of the GOP embracing “leftist sexual identity politics.” The “conservative” gays who were present — and I’ve followed dozens on Twitter since the 2020 presidential campaign — generally reject identity politics in all its forms. And they most assuredly are not leftists.

Something other than simple “right versus left” politics is at work here.

By supporting and engaging in same-sex “marriage,” and accepting the notion that as homosexuals they are “born that way,” Log Cabin men and women prove themselves to be not conservatives, but libertarians. The same goes for their non-LGBT supporters.

RNC head McDaniel can no longer legitimately be called a “conservative,” nor can Log Cabin congressional allies such as U.S. House Representatives Chris Stewart (R-Utah), Dan Crenshaw (R-Texas), and Madison Cawthorn (R-North Carolina). Nor can President and Mrs. Trump.

In the weeks leading up to last year’s presidential election, Donald Trump was described as the “most pro-gay president in American history” and was hailed as “the first president to enter the White House supporting gay marriage.” In the final week before election Day 2020, Melania Trump appeared in a video saying she “unapologetically” supports gay Republicans.

By going along with the pretense that two males or two females can be “married” and by not flatly rejecting the notion, conservatives are playing with fire, doing untold damage to marriage, manhood, and rising generations of young people vulnerable to LGBT truth-science-and-nature-defying ideological influences.

Former acting Director of National Intelligence, Ambassador Ric Grenell accurately rejected Matt Walsh’s characterization of Saturday’s Mar-a-Lago crowd as “leftists,” but he too missed the mark by ignoring the elephant in the room: Homosexuality is not a conservative trait and same-sex marriage is anathema to truth.

A decade or two ago I too was a Log Cabin and GOProud enthusiast — not to mention a Gay Men’s Chorus of Washington member — until I was forced to part ways with Republican gay groups because of their support for the impossible notion of same-sex “marriage.”

Log Cabin’s embrace of same-sex “marriage,” and each individual gay conservative’s indulgence in this outrageous pretension in their own lives, is highly dangerous. Radioactive.

Obergefell was a horrible decision by the U.S. Supreme Court — as horrendous and unfounded as Roe v. Wade. Obergefell immediately threw open the door to transgenderism, a contagion far more dangerous to vulnerable young people than COVID. It weakened the meanings of marriage and family. Period. Full stop.

The coalition the RNC should be focusing on building is with former — now chaste — gay, lesbian, and transgender voters, most of whom have become devout pro-life, pro-marriage & family Christians after walking away from LGBT lives. They have each heroically pursued truth, often at a steep price.

Conservative elites, whether members of the political, academic, media, or corporate classes, need to once again relentlessly pursue intellectual honesty and integrity regarding creeping LGBT influence within their ranks.