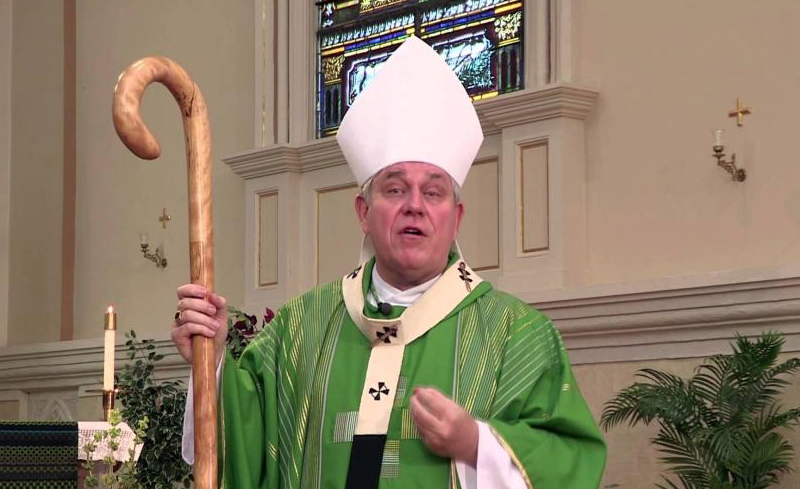 MILWAUKEE, Wis., September 29, 2018 (LifeSiteNews) – A priest who has come under fire for a planned retreat this week for “gay priests, brothers and deacons,” is advancing his pro-gay agenda while his Archbishop retreats into silence and inaction.

The leader of the Oct. 2-4 retreat, Fr. Bryan Massingale, launched a high profile campaign in August to champion his retreat for homosexual priests while his Archbishop, Jerome Listecki of Milwaukee, has stopped short of taking steps to shut down the event which stands in opposition to Church teaching.

In an opinion piece published by the National Catholic Reporter (NCR), Massingale used a snarky tone to challenge his critics––including his Archbishop who had previously issued a statement saying that the retreat was not sanctioned by the diocese.

Insisting that the retreat is no different from any other retreat, Massingale said it never would have occurred to him to ask for permission to hold the pro-homosexual event.

“I have led retreats for all kinds of groups, including Christian women, Boy Scouts, confirmation candidates, seminarians, pastoral ministers … women religious, permanent deacons, campus ministry groups, those who have left the church and seek to return, and even Catholic cat lovers,” said Massingale in NCR.  “Never was there a suggestion that advance notification was needed to act as a spiritual guide for the people of God.”

New Ways Ministry (NWM), a dissident pro-LGBT organization which is sponsoring the retreat as it has in years past, continues to try to present itself as Catholic, yet it has been formally condemned by both the Vatican and the United States Conference of Catholic Bishops for opposing Church teaching.

NWM has also been repeatedly banned from speaking in Catholic dioceses.

But not this year, not in the Archdiocese of Milwaukee.

Though Massingale, who now teaches at Fordham University, is a priest of the Diocese of Milwaukee where the retreat will be held, Archbishop Listecki has not forbidden the priest from leading it.

In August, Listecki issued a statement making it clear that the retreat for ‘gay’ priests, brothers and deacons to be held in his archdiocese is neither endorsed by him nor does it reflect the teaching of the Catholic Church.

“This event is not in line with Catholic Church teaching and is in no way connected to or endorsed by the archdiocese,” said Listecki, “and New Ways Ministry is not a Catholic organization.”

In the same statement, however, Listecki said, “I cannot prevent the Sisters from running this retreat, nor Fr. Massingale from leading it. What I can do, to the best of my ability, is share the truth about the teachings of the Church with the Faithful People of God.”

With that statement, the Archbishop denied his own power, essentially declaring to Massingale that he had won.

Without the Archbishop’s intervention, the retreat appears to be heading toward reality unencumbered.

LifeSiteNews reached out to Archbishop Listecki and his communications staff both via email and phone in an attempt to understand the Archbishop’s reasoning for his passive approach, but received no reply.

Massingale asserted that objections to the unabashedly pro-homosexual event stem from one thing: prejudice.

Brushing aside Church teaching and best pastoral practices, Massingale said that it’s healthy for Catholics, including priests and prelates, to use the word ‘gay’ to describe themselves, while simultaneously holding that “identifying as ‘gay,’ does not mean that ‘sexual desires’ then define a man’s core identity.

While Massingale’s NCR opinion piece seems to be addressed to the public at large, at its heart it challenges his Archbishop, flaunting the power that has now been ceded to him.

The net result is the public emasculation of Archbishop Listecki.

Pattern of LGBT approval emerging in the Milwaukee Archdiocese

Late last year, with the approval of Archbishop Listecki, another of his priests announced to his parish and to the world that he is a homosexual during Sunday Mass.

The Rev. Gregory Greiten, a priest of the Milwaukee Archdiocese and pastor of St. Bernadette Parish, said, “I am Greg. I am a Roman Catholic priest. And, yes, I am gay!”

In advance of the Sunday announcement, Listecki met with Greiten who warned his superior of his plans.  Rather than forbid or counsel against the priest’s actions, Listecki instead issued a statement backing his announcement.

“We support Father Greiten in his own, personal journey and telling his story of coming to understand and live with his sexual orientation,” said Listecki.  “As the Church teaches, those with same-sex attraction must be treated with understanding and compassion. As priests who have made a promise to celibacy, we know that every week there are people in our pews who struggle with the question of homosexuality.”

Both Greiten and Massingale have weaponized NCR against their Archbishop, and magisterial teaching.

At another New Ways Ministry-sponsored retreat last April, Fr. Massingale talked about how he told the Milwaukee archbishop in 2005 that he refused to teach the Vatican’s document on inadmissibility of homosexual men to seminaries.  Massingale said:

When the 2005 document came out from the Vatican, about the inadmissibility of gay men to the seminary and to, um, the priesthood, there was a group of us in Milwaukee who said we cannot remain, unless we are known for who we are. And what was amazing was that independently without talking about it, over 30 of us made appointments with the archbishop and basically came out. Because we could not stay with integrity if we did not register that our profound, you know, disagreement, non-acceptance of this document.

I met with the archbishop and in the process of my telling him my story I said you know, archbishop, I’m the spiritual director of seminarians, and you need to know this about me and if you don’t want me as spiritual director of the seminary anymore, that, I can accept that but, you know, you should also know I’m a moral theologian, and I can find something really cool to say about even Humanae vitae, I can find nothing redemptive to say about this document and I refuse to teach it, as being a part of the authentic teaching of the Church. You should know that.

“And he said, ‘Well, Bryan, I need you as spiritual director, I want you to continue’.”

Massingale then advised the archbishop, who was slated to speak to the diocesan seminarians the following week:

Delighting the crowd at the retreat, Massingale assured them:

All of that is to say, is that there is more going on in our church than is sometimes reported. Now I’m not saying that to be Pollyanna-ish because I’ve had other meetings that didn’t go so well, and there are diocese where I’m not permitted to talk, or speak, and dioceses where I have spoken and I can’t speak at a Catholic facility, that’s also part of the reality.

But there are also other things that are going on as well, and, I think one of the things that we need to do is not only to speak our truth but when we find bishops who are open to pray, and to pray for them.

If this story recounted by Fr. Massingale is true as he has told it, then by complying with Massingale’s wishes and not ousting him from his position as director of vocations for the diocese, Timothy Dolan handed a great deal of power to the pro-homosexual priest.

This perhaps explains his snarky irreverence toward both his current bishop and Church teaching.

When LifeSiteNews reached out to Cardinal Dolan’s office for comment, his director of communications declined to comment.

Catholics United for the Faith has issued a resolution asking Archbishop Listecki to use his authority to ban Fr. Massingale from leading the upcoming retreat for “gay priests, brothers and deacons.”

In order to prevent further damage to the Faith, and scandal to the faithful, the St. Gregory VII Chapter of Catholics United for the Faith (CUF) hereby urges you, as Archbishop of Milwaukee, to officially prohibit the exercise of Father Massingale’s participation in the New Ways Ministry retreat.