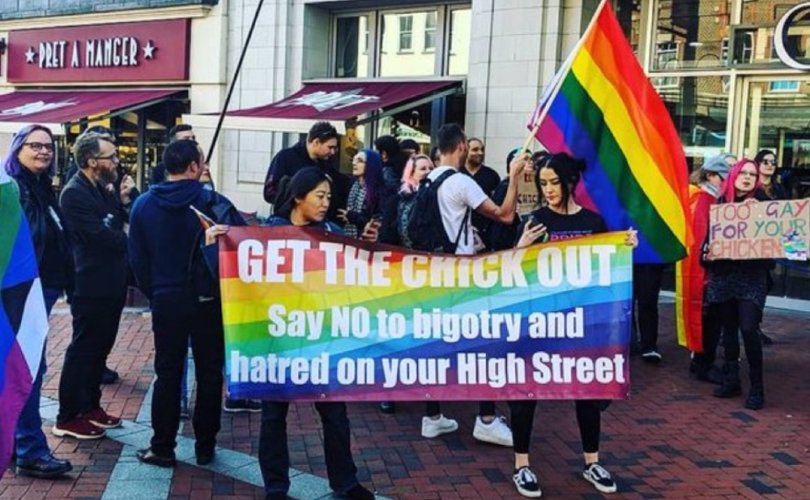 LGBT activists protest the first Chick-fil-A in the UKTwitter

After opening its first UK location earlier this month, Chick-fil-A will soon have to close after the owner of the leased space decided to cave to pressure from disgruntled LGBT protesters.

As soon as the restaurant opened, gay rights activists called for a boycott of the Chick-fil-A in The Oracle shopping centre in Reading, England.

“GET THE CHICK OUT,” tweeted UK Pride Network.

Local LGBT activist group Reading Pride told the BBC that three Christian-based charitable organizations that the Chick-fil-A Foundation has donated to – the Fellowship of Christian Athletes, the Paul Anderson Youth Home, and the U.S. Salvation Army – are “hostile to LGBT rights.”

A spokeswoman for the Oracle centre said: “We always look to introduce new concepts for our customers, however, we have decided on this occasion that the right thing to do is to only allow Chick-Fil-A to trade with us for the initial six-month pilot period, and not to extend the lease any further.”

Reading Pride responded saying that The Oracle's decision was “good news,” adding the six-month period was a “reasonable request… to allow for re-settlement and notice for employees that have moved from other jobs.”

“There is a war against traditional values across the globe,” declared conservative commentator Todd Starnes concerning the pending closure of Chick-Fil-A’s sole British outpost.

“A small, but vicious, group of LGBT activists is hell-bent on forcing every human on the planet to bow down to their radical agenda,” continued Starnes. “They even target conservative gays – anyone who dares to stand in their way.”

“LGBTQ said they wanted freedom for their views but all along we knew they wanted total acceptance by all!” tweeted Ken Ham. “They are some of the most intolerant in our culture.”

LGBTQ said they wanted freedom for their views but all along we knew they wanted total acceptance by all! They are some of the most intolerant in our culture. So just because the owner of a business is Christian and believes God’s Word concerning… https://t.co/oSJgOnBWnh

“Chick-fil-A opened its first UK restaurant eight days ago. And already it’s been announced that it’ll be closing once its 6 month pilot is over all because of unfounded outrage!” noted world-famous pro-life activist Obianuju Ekeocha in a tweet.

“So for the next 6months I’ll do my best to eat at this Chick-Fil-A in Reading,” she proclaimed.

And already it’s been announced that it’ll be closing once its 6 month pilot is over all bcos of unfounded outrage!

So for the next 6months I’ll to do my best to eat at this @ChickfilA in Reading https://t.co/C60WQysB8M

Despite similar denunciations from LGBT groups in the United States concerning the fast food chain, Chick-Fil-A continues to thrive and grow.

Persistent cries of “homophobia” have done little to prevent Chick-fil-A’s rise among the fast-food ranks, and recently-highlighted data show the Christian chain’s business is making twice the money it was when the LGBT attacks first started.

Chick-fil-A enjoys tremendous success and an overwhelmingly positive reputation due to its service as well as its charitable bent and volunteerism during tragedies and disasters. Furthermore, for all the “anti-LGBT” branding, many homosexual employees and customers have attested to positive, welcoming experiences with Chick-fil-A.