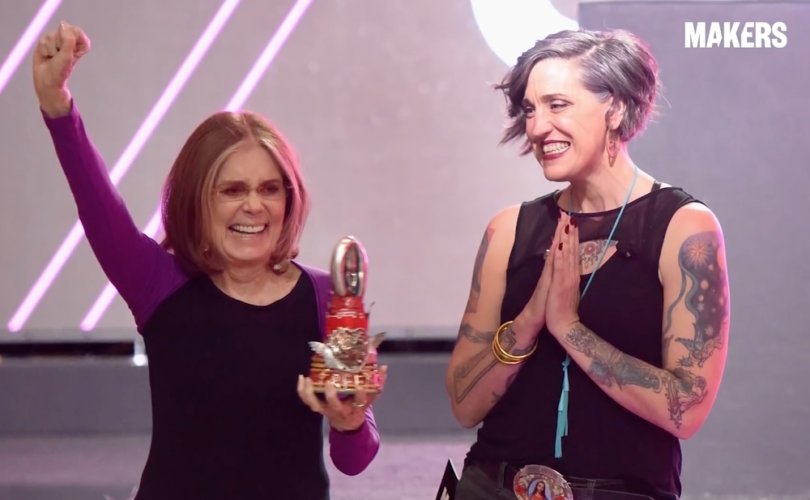 February 20, 2019 (LifeSiteNews) – Many of the mainline Protestant denominations are such an anti-Christian farce these days that it’s hard to keep up.

The United Church of Canada is not united, not a church, and even has an atheist pastor. The Church of England is experimenting with a fictitious new pseudo-sacrament to celebrate the sex change surgeries of transgender people (who they are also trying to recruit to the clergy.)

And then there’s the so-called Lutheran theologian and pastor Nadia Bolz-Weber, who until July of last year headed up the Evangelical Lutheran Church in America in Denver, Colorado.

She’s recently gone on a book tour to promote her latest exercise in self-justification, titled Shameless: A Sexual Reformation, which essentially invites post-Christian church attendees (and anyone else—she isn’t picky) to join the Sexual Revolution. The book jacket states that, “She urges us to take antiquated, sexist ideas about sex, gender, and our bodies and burn them the f—- down and start over.” By “antiquated ideas,” of course, she means “biblical” or “Christian” ideas. At one church she pastored, she had a “Minister of Fabulousness” help her out. That “minister” was a drag queen.

This wolf in wolf’s clothing, by the way, described herself to the Houston Chronicle as “in some ways a very orthodox Lutheran theologian,” although she is obviously someone who has never read Martin Luther. But she’s now in the news again, because to push back against “evangelical purity culture,” she decided to pull an entirely new stunt. Declaring that she wanted to “take down” the traditional Judeo-Christian understanding of sex, she put out a call on social media for women to send her their old “purity rings,” which many American evangelicals wore to symbolize their fidelity to chastity.

“Beginning November 12, until December 17th,” she explained on her website last year, “you’ll have the opportunity to send in your purity rings to be melted down and recast into a golden vagina. This sculpture will be unveiled at the 2019 Makers Conference.” She apparently received hundreds of these rings, and hired a welder to melt them down into a sculpture of a vulva. Women who sent in their purity rings were given a “certificate of Impurity” in exchange by the female pastor, which urged them to live a “SHAMELESS…life…knowing that they are already holy.”

To complete her little crusade, Bolz-Weber took the stage at the 2019 Makers Conference, a world-famous women’s gathering, to present the sculpture to the audience, and then announced to cheers that she wanted to gift the melted-down purity rings to Gloria Steinem, the aging abortion activist and feminist icon. The symbolism seemed grotesquely appropriate as well as nauseating and depressing. The spokeswoman for progressive post-Christian Protestantism embraced the midwife of America’s abortion culture and gave her a statue made of destroyed commitments to chastity. The imagery was searing.

In his book The Strange Death of Europe, journalist Douglas Murray—himself a homosexual man—noted that one of the reasons that so many Westerners have been attracted to Islam rather than Christianity in recent years is because the post-Christian mainline denominations and decadent state churches have abandoned any semblance of coherent theology, and simply don’t seem to actually believe in anything anymore. As a matter of fact, Bolz-Weber and the rest of these make-believe clergypersons actually do believe in things, they just happen to believe that Christianity, as it was understood for two millennia, should be burned to the ground. They are not with the defenders on the walls. They are with the barbarians at the gates.

And Bolz-Weber’s little stunt with the woman who championed the destruction of babies in the womb for her entire adult life might actually be the perfect encapsulation of that fact.