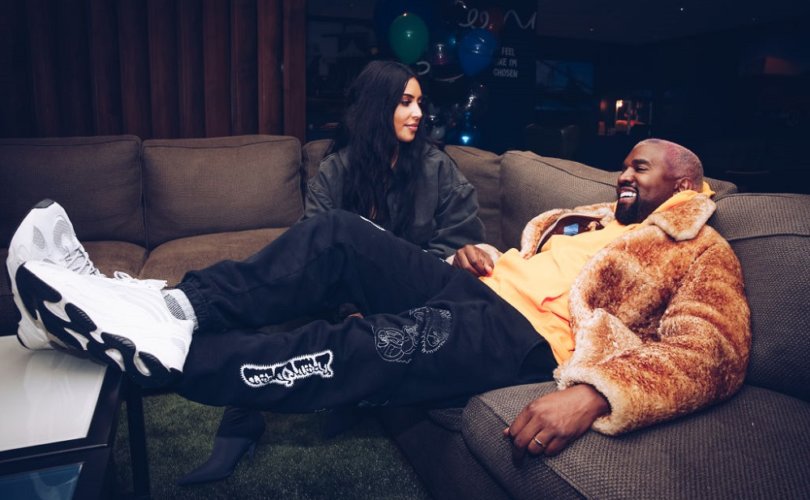 August 4, 2020 (LifeSiteNews) — On July 9, I noted in this space that I believe that it is dangerous to appoint celebrities as spokespeople and to hold them up as examples in the service of a social cause, especially for the pro-life movement. There are celebrities who have expressed anti-abortion sentiment over the years, but nearly all of them are still part of the industry that did so much to create and promote our culture’s carefree attitude toward abortion and promiscuity in the first place. The temptation to promote anyone who expresses hesitancy about our abortion culture should be resisted.

That said, I cannot help but notice something strange about the reactions to rapper Kanye West’s recent revelations that he and his wife Kim Kardashian seriously considered aborting their first child.

Almost universally, West has been condemned as “crazy.” The media have trawled for West friends willing to say he is unstable. His new position on abortion has gone totally unaddressed and has instead been written off has an unfortunate side-effect of a bipolar episode. His “emotional outburst” when talking about the fact that his daughter North was almost aborted apparently indicates that he needs his meds.

Now, I’m not saying that West doesn’t struggle with mental illness. It appears to be obvious that he does and that some of his recent outbursts are related to bipolar disorder. But that doesn’t mean that his comments on abortion have not been consistent or that they don’t deserve thoughtful responses from his detractors. He told Forbes, for example, that “Planned Parenthoods have been placed inside cities by white supremacists to do the Devil’s work” and that “I am pro-life because I’m following the word of the Bible.”

Later, he tweeted and then deleted a screenshot of a Google search for “what does a 6 month fetus look like.” Along with the now deleted image, he wrote, “These souls deserve to live.” The last two tweets on his timeline at the moment are from July 31. One is a New York Post article on a New York City Planned Parenthood removing racist and eugenicist Margaret Sanger’s name from the facility. The other is a fact that the abortion industry does not want discussed, which has thus far been tweeted over 48,000 times: “Over 22,500,000 black babies have been aborted over the past 50 years.”

To write West’s anti-abortion statements off as part of a bipolar episode or a manifestation of mental illness is contemptuously dishonest. All of his statements are factual and challenging and genuinely deserve a response from those who support the industry that has killed “22,500,000 black babies” while currently wrapping itself in the banner of Black Lives Matter. It is also true that those babies in the womb are babies — and the reason the abortion industry and her celebrity allies are panicking is because it is extremely inconvenient to have one of the world’s music superstars consistently pushing this fact out to 30.6 million impressionable followers.

West summed it up succinctly in a statement that has already been retweeted over 68,000 times: “I cried at the thought of aborting my first born and everyone was so concerned about me… I’m concerned for the world that feels you shouldn’t cry about this subject.”

That is precisely it. Kanye West is too big of a celebrity for Hollywood or the music industry to simply write off, so instead they must pretend that everything coming out of his mouth right now is crazy and that he needs professional help. That may be true, but certainly not for his astonishingly articulate and powerful statements on abortion. West has flipped, and the rapper who produced thousands of filthy lyrics is now attacking abortion with the same enthusiasm with which he once promoted promiscuity to a massive audience. That, for the abortion industry, is dangerous.

So prepare to see many more statements over the coming months about Kanye West’s pro-life statements being evidence not that he is grappling with the implications of the human rights issue of our time, but that he is truly unstable and in need of help.