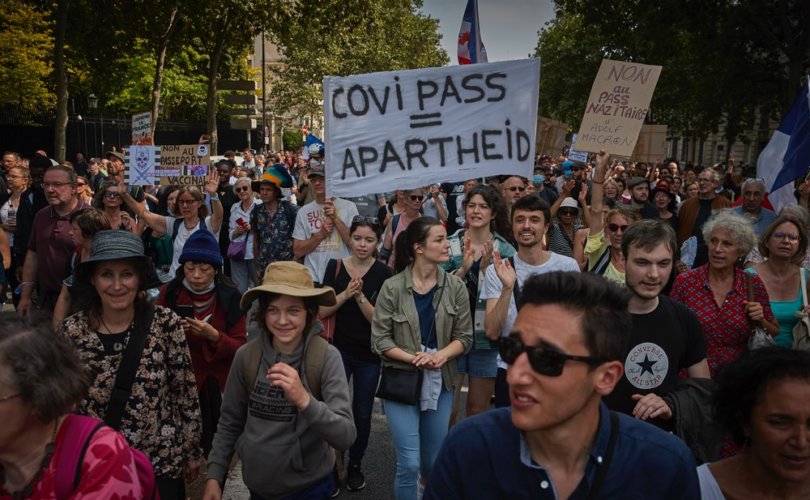 FRANCE (LifeSiteNews) – The number of rallies against mandatory COVID-19 “vaccines” for health workers and a sanitary pass requirement for many everyday activities in France has risen once again: no less than 217 demonstrations took place all over the country last Saturday, after the first week under the new regime of segregation.

Official numbers quoted without question by the mainstream media put nationwide participation at 215,000 – about 20 percent less than the government statistics for the previous Saturday.

Dozens of videos posted on Twitter give the lie to the narrative of the powers that be: while they show only a fraction of the more than 200 rallies, each reveals the enormous, determined crowds that gathered both in large and small cities for the fifth Saturday running, this time under a canicular heatwave.

If police numbers are so very evidently false, this must mean that the government did not expect such widespread opposition to its social control project. Coming, as it does, from every quarter of society, the clamor of those who are fighting to defend their freedom and their right to protect their own health, keep their jobs, and live normally is a threat to all established mainstream politicians, most of whom never said a word against any of the COVID restrictions since March 2020. So the movement is being downplayed to a point where any honest citizen can see the government is lying.

Despite these massive gatherings, without masks or “social distancing” of any kind, no COVID clusters have been observed as a consequence of the mingling of citizens of all ages, many if not most of them unvaccinated. The number of deaths attributed to COVID remains low, while the proportion of positive tests has remained under four percent for the last eight days, and is now under 3.5 percent.

I joined the march in Vannes, Brittany, where the crowds have visibly swollen since the first march on July 17. The Ministry of the Interior counted 2,100 demonstrators on Saturday. A partial view of the Vannes rally can be seen here on a Twitter video. There were so many people, including newcomers who had not joined during the four previous demonstrations, that it was impossible to find back all one’s friends during the march: a sure sign of success.

I was surprised, though, and pleasantly so, to bump into our next-door neighbor. Increasingly, people I meet in the streets of our village are voicing their skepticism about the COVID narrative and their concerns about the experimental “vaccine.” The effects of months of relentless media bludgeoning appear to be wearing out. President Emmanuel Macron’s lies – in December he promised mandatory vaccination would “never” happen and he later said no health pass would ever be required for everyday life – are being called out. And while COVID deaths are few and far between, “vaccine” adverse effects are not, and people are hearing about them from friends and family.

Many seaside towns in our part of Brittany now have mask mandates for outside once more, but at the rally in Vannes, almost no one was wearing one, apart from the odd health worker whose profession is to care for the frail and elderly. Indeed, speaking with people who came to the rally from neighboring, I gathered that most local inhabitants are now simply ignoring the latest mask mandate, while local police appear to have other fish to fry than to write out 135 euro (150 dollars) tickets to punish recalcitrants.

In fact, at this point, the more restrictions the government sets up, the less people appear to be worrying about COVID. If you’re lucky, you now find shops where attendants tell you not to bother with the mask. A video leaked earlier this month from the French Antilles showed a local government representative preparing for the official shoot telling the director of the regional health agency in Guadeloupe to remember to adopt “a grave and catastrophic tone” about the COVID situation in the island. Last week, Macron told the members of the French government who were having their weekly meeting with the president: “We need to dramatize a bit so that everyone gets the vaccine.” This piece of news was confirmed by several government sources and quoted by the mainstream press: it appears to have confirmed a section of the French population in its belief that the gravity of the health “crisis” is being willfully exaggerated.

Perhaps walking through the streets of French towns with banners and flags is useless from a political point of view. Will such an ideologically-driven set of politicians as Macron and his friends put an end to measures that are obviously aiming to force people from age 12 up to get the experimental jab? For a week now, people like me who have not got the spike protein injection are barred from cultural and sports activities, professional and leisure travel, visiting family in hospital and medicalized homes and receiving non-urgent medical care, going to a restaurant or a bar or even the beach in some places. We have become in some way “impure” if we cannot prove COVID-negativity, which means accepting incessant COVID tests.

For health workers – both carers and administrative personnel – and fire-fighters, the situation is even worse because of the “vaccine” will be compulsory for them. As our demonstration made its way through the streets of Vannes, I spoke with one employee in a hospice for the elderly who told me she had made up her mind: she has a previous health condition that makes receiving the experimental “vaccine” particularly risky, but that will not exempt her; she will stop work at the end of this month. Some of her colleagues have resolved to get the jab despite being opposed to it, so as not to leave the elderly patients in the lurch, and for no other reason.

Another demonstrator, a nurse at a local hospital, was told to get the “vaccine” or not to return to work after her holidays in August, despite the fact that mandatory vaccination can only be required legally as of September 15. She faces being fired without compensation and without unemployment benefits.

A doctor who joined the march confirmed to me that of the dozens of colleagues from different parts of France he had asked about their personal experience with the coronavirus, only one had in effect had two actual deaths among his patients. All the others had yet to be confronted with fatal cases.

Another demonstrator spoke about a friend, the daughter of a local undertaker, who said her father was continuing to see several death certificates a week with “COVID” marked as the cause of death, while the deceased’s family insisted that their relative had died from some other cause.

Yet another, who joined the march although she received the experimental jab in order to travel to see her children, told me she had suffered a bout of shingles after getting the “vaccine.”

So perhaps marching through the streets of Vannes was not so useless after all. People meet and share their first-hand experiences. They find similarly-minded people who confirm that they are not alone or crazy. Who knows? Perhaps these meetings are preparing them to create networks of solidarity in the “Brave New World” where the unvaccinated are already being considered as second-class citizens.

In Vannes, the main slogan has changed somewhat since previous editions. “Liberté” was the catchword then; now it’s: “Liberté! Résistance!”