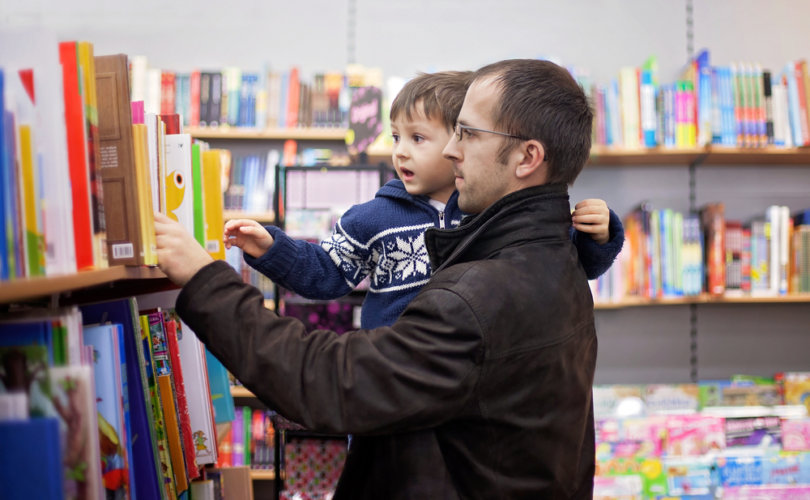 April 18, 2019 (LifeSiteNews) – The group Glitter Hole is a “drag collective” and “queer performance space,” and if you’re wondering what their name means, their logo is a purple sketch of a bare bottom with the word “HOLE” beneath it in all capitals. Their sexually explicit performances including miming sex acts, strapping on enormous fake genitalia, and other activities better left undescribed. One poster advertising their group was emblazoned with the slogan, “Keep the buggery going!” while another announced that they were “leather daddies and gay witches for abortion.” And, as the new Irish media outlet Gript recently reported, Glitter Hole was invited to participate in a “drag storytelling event” at Dublin’s Dun Loa Library.

Considering that this was billed as a “family event” and that children as young as three years old would likely be present, and considering the fact that this “drag collective” specializes in sexually explicit performances that push the boundaries of what even many adults would find tasteful or acceptable, one might wonder why Glitter Hole would be invited to read stories to children in the first place (one photo of the group featuring cross-dressing and one member sporting an enormous fake vagina has them posing in front of a banner reading “The Gay Agenda.”) However, when it was revealed that Glitter Hole was being invited, the library canceled the event.

Glitter Hole, which has organized at least three other “family events” featuring drag queens reading to children, is furious by the cancellation, claiming that the Country Council was wrong to cite “age appropriateness” as a reason to spike an event put on by a group specializing in sexual performances. They claim that the cancellation is actually due to the outrage expressed at the group by many online, including parents who were stunned to find out that a drag troupe with a bare bottom as their primary logo was orchestrating a “family event” targeted at children. Glitter Hole referred to those who were concerned as “bigots.”

The Irish Times, predictably, embraced this narrative, reporting the news under the headline “Drag storytelling event for children cancelled due to homophobia.” (I notice they’ve slightly altered their title since then, perhaps in response to many pointing out the sheer brazenness of their bias.) In other words, a supposedly factual reporting of the event by the Times overtly accuses those who have concerns about a group created to put on sexual performances for adult audiences reading to children of hatred against LGBT folks. This is how the mainstream media treats regular folks with genuine concern about why a group like this would be invited in to read to children in the first place (and feel free to peruse their Instagram account if you have any doubt as to what they’re all about.)

This is another example of how the mainstream media and the LGBT movement work in tandem. A drag queen collective secures a spot reading to children at a local library despite the fact that their primary purpose is sexually-charged and obscene performances for adults, parents notice and protest this decision, and the media steps in on behalf of the drag queens to accuse those with concerns of being hateful bigots. Those in charge of deciding whether to keep the event going or to cancel it are thus faced with a dilemma: Either cancel it and be smeared by the national press, or keep it going and face the outrage of many parents who, after all, are the people who bring their kids to the library in the first place.

Glitter Hole, of course, is outraged that they are not being given the opportunity to read stories to other people’s children. “Violent homophobia” is the reason for this, according to the drag queens, and they get away with spouting this nonsense because the mainstream media seems happy to endorse the idea that they somehow have the right to headline family-friendly events and that any parent who declines to express enthusiasm at taking their kids to listen to performers who were kind enough to remove their giant plastic genitalia for this particular gig is guilty of a thought-crime. This is obvious nonsense, and should be called out as such. The mainstream media is a joke, and it is simply strange that a group created for sexual performances would want to diversify into children’s story-time in the first place.

This sordid incident is another example of why we need alternative media so badly, and I look forward to Gript Media making its impact on Ireland.

Jonathon’s new podcast, The Van Maren Show, is dedicated to telling the stories of the pro-life and pro-family movement. In his latest episode, he interviews political science professor Darel Paul who discusses how the upper tier of American society evolved over time to support and then push gay 'marriage.' Author of “From Tolerance to Equality: How Elites Brought America to Same-Sex Marriage,” Dr. Paul argues that liberals don't have to sacrifice much to let gays and lesbians into their elite circles. You can subscribe here, and listen to the episode below: