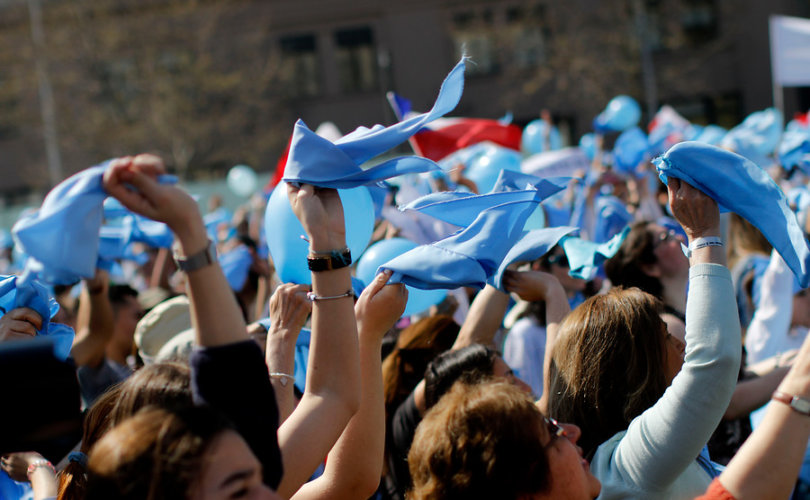 September 14, 2018 (LifeSiteNews) – Since thousands of pro-lifers wielding blue kerchiefs recently showed up on the streets of Argentina to protest plans to legalize abortion, a “Light Blue Wave” has been spreading across South America and Latin America.

The rally featured Chileans of every age group as well as a “Voice of the Heart” demonstration, where pregnant women wielding bullhorns amplified the heartbeats of their pre-born children for the crowd.

I managed to get in touch with one of the pro-lifers there, Francisca Jofre of Movimiento de Mujeres Reivindica and ask her what the pro-life movement has been up to in her country and across the continent.

Francisca Jofre: This Saturday there was the “Pañuelazo por las 2 Vidas”, which is a manifestation where light blue handkerchiefs were used, the symbol of the movement “Light Blue Wave,” which is under the patronage of the campaign “Save the 2 Lives,” initiated in Argentina during the discussion of legal abortion law in this country, and expanded throughout the whole region.

In Chile, the “Movimiento de Mujeres Reivindica” (the organization I belong to), “Testimonios por la Vida” and “Siempre por la Vida” created the collective “For the Two Lives,” which is supported by 25 other organizations, in order to coordinate and replicate the Argentinian campaign in Chile. Last Saturday, it had been one month since the legislative proposal was rejected in Argentina, and here in Chile, some Members of Congress introduced two new bills that intend to push legal abortion in our country. The abortion lobby never sleeps, and is well organized in the region. But so are we. That is the reason why we made the manifestation [rally] in front of the Presidential Palace, where around 3,000 people showed their disapproval of abortion and asked for more political support for women and their children.

Van Maren: What has the pro-life movement been doing in Chile since abortion was first legalized in some circumstances?

Francisca Jofre: Until now, after the legalization in some circumstances, we have been defending the right of conscientious objection and the freedom of the health institutions to not have to practice abortions, which also has been questioned. We have also fought, and still keep fighting for having real accompaniment [genuine assistance] for women who want to abort, and defending the idea of a deterrent accompaniment, because the “accompaniment” that the Government is obliged to give is neutral (and in the practice we are not sure if it is neutral or even pro-abortion, and therefore it is not a real accompaniment).

About three months ago, due to the discussion of the legal abortion law in Argentina, we knew that the abortion lobby, IPPF subsidiaries in Chile, would try to push the discussion here as well. So we got in touch with the various organizations that were behind the “Light Blue Wave,” in order to build a regional articulation of the movement and to give them support. We all knew that the whole world was watching what was going on in Argentina, and of course what was going to happen there would be a groundbreaker for the entire South American Region.

So we created the “Light Blue Wave Latin America” and started to implement some coordinated actions to support Argentina, and, after the rejection of the project, to support the actions against abortion and “For the Two Lives” in all the countries of the region. And the last event we organized in Chile was last week's “Pañuelazo”.

Francisca Jofre: Despite the fact that the abortion lobby has spent a lot of money over the last couple of years to try to convince the public that abortion is a good thing, the polls show that they have failed in their attempt, because most people are against legal abortion.

In the Bicentenario Poll, which is made every year by one of the most respected universities of Chile and Adimark, only 14% of those questioned agree with the idea that abortion is a right, and most of them are part of the elite (14% of the proponents are members of the richest sector of Chile, in comparison to 7% in middle and the same percentage in lower class. So this data tells us that Chile is still a pro-life country.

Van Maren: What are the chances of abortion becoming completely legal in Chile?

Francisca Jofre: In the National Congress we have a similar situation, because the political pro-abortion force does not have sufficient votes. Even in parties, which you could believe have a pro-abortion consensus, like for example the socialist party, there are various members of Congress against their own position. This, added to the fact that our President is a declared pro-life individual, has made a campaign promise not to push any law against life and was going to promote accompaniment measures to prevent abortion, are facts that show that the chances of abortion becoming legal in Chile are very low.

Van Maren: What is the pro-life movement doing to push back?

Francisca Jofre: In addition to the regional movements all over Chile, there are various Members of Congress and politicians committed to the defense of the cause, and we also work with individuals that take part in the resistance movement to stand and fight “For the Two Lives.”

We are very happy to see how people get involved and start getting motivated to raise their voice and take action in order to show that we are a majority, that has been silent in the past (and often silenced by the media), and is now starting to speak out and to demand respect for Human Rights, support for women in vulnerable pregnancy and maternity situations, and of course prevention.

We organize different activities and manifestations, participate in debates and in public discussions, but within the movement, we also work with pregnant women who need support and accompaniment during their vulnerable pregnancy and motherhood period. This has been and will always be a priority for us.

Van Maren: How large is the pro-life movement, and what is it like?

Francisca Jofre: The movement is increasing and has become quite diverse. There are various organizations with a special focus on children, but Reivindica, for example, tries to shine a light on politics that support maternity issues and has more of a Human Rights focus. There are also religious movements and others that are pluralist, all based in Chilean regions and also in Santiago, the capital of Chile.