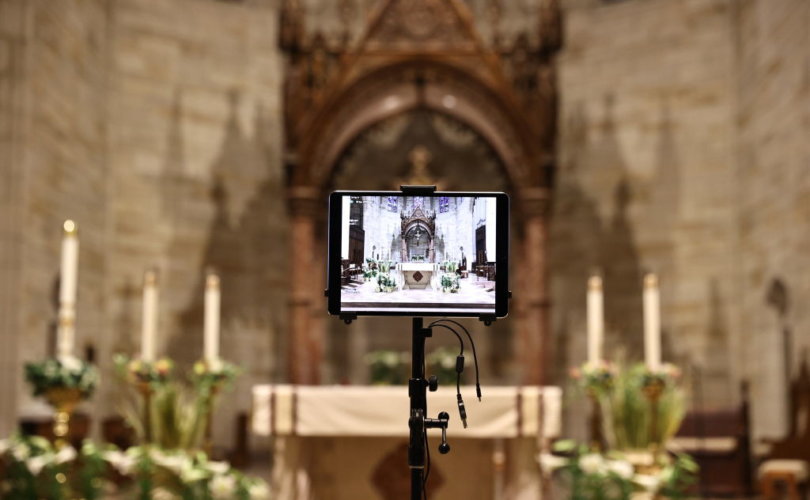 April 14, 2020 (LifeSiteNews) – Many liturgists today, laments Walter Hoeres, “understand the Mass not so much as cult, as sacrifice, but much more as God’s deed for man; just as if, contrary to all great theologians and all councils, we were concerned not so much with worshipping and glorifying the Almighty and accordingly with an atoning sacrifice, but above all with human well-being.”

How often have we encountered this mentality: the liturgy as affirmation workshop, as communal talent-show, as a stage for the chickabiddies to warm their grandmothers’ hearts, as a running commentary on current events (especially through Thunberg-style intercessions), and everything else—except the awesome mystery of the sacrifice of the Cross through which we adore the Father in spirit and in truth?

In an article posted on April 13 at New Liturgical Movement, “Live-Streaming the Absurdity of Versus Populum and the Prayerfulness of Ad Orientem,” I describe how this very odd moment in our history—when the vast majority of Catholics are limited to praying under their own roofs, either reading from their missals or gathered round a video screen—has brought home in a vivid way precisely the contrast that Hoeres describes.

The Reverend Mr. Rogers with the broad smile caresses the cold camera as he leads the flock to pastures of pastel sentimentality: this episode is about human well-being (albeit understood in a narrow sense).

On the other hand, a few clicks of the mouse bring one to an Institute of Christ the King Sovereign Priest solemn Good Friday Mass of the Presanctified. The Reverend Father, assisted by a deacon with a broad stole, ignores the camera as he faces forward to the altar, which is his focus and ours. We barely catch a glimpse of his face, we do not make eye contact, we feel—blessedly!—excluded from his recorded attention. It consoles us and inspires us to know that he does have us, at least generally, in mind, because he is praying earnestly to God to grant us His mercy and grace, which is just what we need for our real human well-being. A liturgy like this leads the flock in the direction of contemplative prayer.

“Lord, it is good for us to be here” (Mt 17:4). This remark of St. Peter on Mount Tabor has a melancholy taste if we savor it at this moment. The one who watches a live-streamed Mass is actually here, in his more or less messy living room or office space, and not there, where Mass (or any other church service) is taking place in the Real Presence of God. It gives us a taste of what it’s like to be on the outside looking in: a convert who awaits baptism, longing to feel the cool water trickle down his head or feel the oil smeared on his brow; a famished man who has had enough of imaginary meals and wants to dig into a piece of meat and a pint of stout. “Lord, it is good for us to be… sort of… here, I mean, there…”

All that the Lord in His Providence wills or permits is for the good of those who love Him (cf. Rom 8:28). What are some of the precious and valuable lessons we can draw from this moment?

First, it does make all the difference in the world to be really present to the Mass, as Our Lord makes Himself really present to us. The Church repudiated the early heresy of Docetism, which held that the humanity of Jesus was merely apparent, a sort of holographic illusion produced by divine power. Given a radical choice between the one and the other, we would chuck our screen into the dustbin in order to go to Mass in person, and bring our bodies into contact with the glorified Body of Christ. For “the flesh of Christ is the hinge of salvation,” as Tertullian says. If He has not risen in the flesh, our faith is in vain (cf. 1 Cor 15:14).

Second, this time of separation reminds us that we, the faithful, are also part of the Eucharistic sign. What I mean is this. Christ instituted the Eucharist not just as an object of adoration—which it most certainly is!—but as a means of uniting us with Himself in one Mystical Body, the Church. Hence St. Thomas Aquinas says that the res tantum or reality signified by the Eucharist is the unity of this Mystical Body: we are being led through the sacrament to our ultimate communion with Christ and the saints in heaven. So, that is why it is symbolically important for us to be at Mass: when we are physically in one place worshiping under the headship of the priest who symbolizes and acts on behalf of Christ the High Priest, we are forming a visible image of the Mystical Body we are called to be, Head and members. When people are scattered to the four winds, they are not, at that moment, showing forth in their persons the ultimate unity Christ came to bring to us and to bring us to. The Mass is truly a social or communal act, even if it is never to be reduced to a horizontal function in its manner of celebration.

Third, our tradition informs the way we offer Mass precisely to keep the many aspects of the mystery of faith “in play” and properly related to one another. Thus, a celebration of Mass in which the faithful appeared to be ordered towards the individual man He has deigned to use as His servant rather than toward Christ the High Priest would be erroneous and could be considered sacrilegious inasmuch as it detracts from the sovereignty and centrality of Christ. This is why the versus populum liturgy is such a huge problem, magnified a thousandfold on the screen: it makes the minister the center of attention.

The Mass is where our belonging to another and not to ourselves is ritually acted out and really enacted in this land of exile. “You are not your own; you were bought with a price” (1 Cor 6:19). The only way for man to be healed, elevated, saved, is through the selfless worship and glorification of God; the only path to wholeness, to the acquisition of a self worthy of the name, is the atoning sacrifice of Christ, which makes of a sinner someone capable of being united to God in friendship. We are called to become like him in all those ways, to be re-created in him, “to the praise of his glorious grace, which he freely bestowed on us in the Beloved” (Eph. 1:6). The Mass belongs to the Beloved, the Bridegroom, not to the friend of the bridegroom (cf. Jn 3:29).

For those who enter into the mystery of unity both symbolized by and really contained in the Eucharist, the liturgy promises a remaking of ourselves in the image of Christ, perfect Image of the Father. With traditional liturgical practices, we are broken by ascetical and ritual demands that stretch us beyond our comfort zone, so that we might be reshaped, re-created—not according to our own conceptions of appropriate form and suitable matter for “Modern Man,” but according to the Lord’s, in relation to which we are as clay to the potter. Over the course of Church history, the Lord has led us, by His Holy Spirit, to see, to desire, and to carry out right worship.

Without a theocentric focus, liturgy will do little more than validate a community’s collective conceit, replacing the burning bush with warm fuzzies. As long as circumstances force us to follow liturgy “from a distance,” we should take up traditional missals or prayerbooks, and, if we find it profitable to meditate and pray with live-streamed services, should make a point of watching liturgies that are fully traditional in their texts, in their spirit, in their beauty—and above all, in their orientation in the literal sense: facing oriens, eastwards. As the Benedictus antiphon of the Easter Vigil proclaims: “And very early in the morning, the first day of the week, they came to the sepulcher, the sun being now risen [orto jam sole], Alleluia.”

May the Sun of Justice, whose coming will be “from the east” at the end of time (Mt 24:27), have mercy on us and lead His people back to the harbor of tradition.

1
Dr. Simone Gold says her ‘spirits are high’ as she endures solitary confinement for entering Capitol
2
Bolivian man escapes after being buried alive in a coffin as a sacrifice to the Pachamama
3
Quebec Cardinal Marc Ouellet accused of sexual assault in class-action lawsuit
4
Chicago community stands with Institute of Christ the King over Latin Mass crackdown
5
The Atlantic downplays radical pro-abortion violence but calls the Holy Rosary ‘extremist’
Subscribe to Daily Headlines »