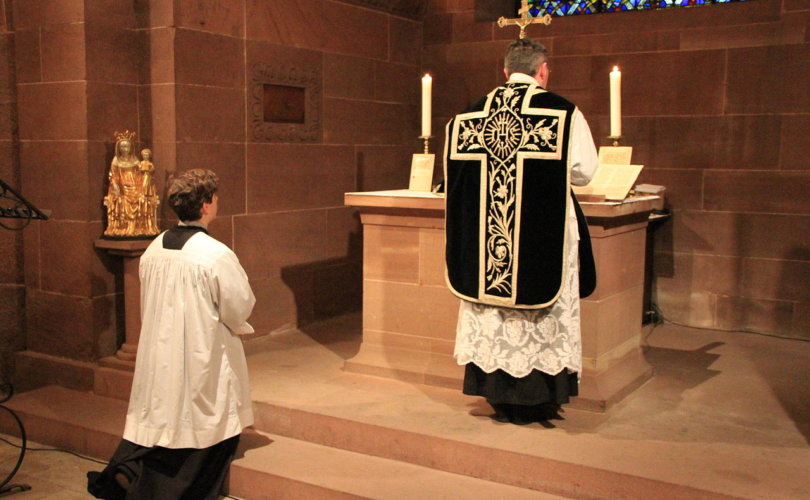 October 31, 2019 (LifeSiteNews) – Every autumn leading up to the feast of All Saints, there seems to be an ever-increasing interest in all things dark, disturbing, and demonic. Some people treat this as a harmless diversion, an innocent way of “blowing off steam” or “having a good time.” Others, more acutely, see it is a phenomenon indicative of a deeper spiritual unrest or malaise characterized by a perverse fascination with evil. Movies, popular music, video games, and fashion designs reflect the same trends. The secular world is making a truce with the Evil One, playing with fire. Those who play with that kind of fire get burned.

Our protection and strength come from clinging to Christ and His saints, above all in the liturgy and the sacraments He has given to us as our source of life and light. The devil, on the other hand, has no liturgy, no sacraments, no source of life and light. Taking a close look at this will help us to renew our gratitude for God’s gifts and the perils of wandering off of that path.

The fallen angels have no common work of charity, no common work of divine worship. As a desert father once said, the devil has no knees. His mentality is non serviam, “I will not serve,” and all the demons think the same way: mindful conformism. For this reason, there is no proper hierarchy in hell. They are more like bandits who are forced to stick together out of self-interest.

Contrary to the prevailing democratic way of thinking, liturgy is essentially connected with hierarchy: Christ the High Priest is the one who leads the worship, and He deigns to allow the participation of the priest, the deacon, the subdeacon, the ministers, the cantors, the choir, the laity, each in his or their own place and function. One cannot demand or create a liturgical role; one rather receives it and enters into it. To be liturgical is to submit freely to an external rule, an order not of our own making, a complex whole of which we are humble parts.

Liturgy takes us beyond ourselves into roles that are not inborn or inherited or fashioned; into realms that are off limits for mere creatures; into actions and passions that are supernatural in both their source and their goal. When we chant the liturgy, we are standing outside ourselves, in the heavenly places: “Our feet were standing in thy courts, O Jerusalem” (Ps 121:1). Our very action of placing on our lips words uttered by another is a reformation of our humanity, a putting on of Christ, a renunciation of the ambitions of Babel, and a quiet welcoming of the Spirit of Pentecost.

For all these reasons, the devil has and can have no liturgy: although he is compelled to submit to the rule of the Almighty, he does not wish to submit, and therefore cannot enter into the joy of his lord; he recognizes no rule but his own will, which is why there is no peace in hell; he has not the humility to allow himself be placed as a part in a larger whole, and to take for his own the words of another. He has no desire to suffer the ecstasy of love.

As Our Lord says in St. John’s Gospel: “He was a murderer from the beginning, and he stood not in the truth; because truth is not in him. When he speaketh a lie, he speaketh of his own: for he is a liar, and the father thereof” (John 8:44). Jesus speaks with metaphysical and psychological precision. The devil is a murderer because he envies God’s life and takes it away from those who have it, rather than receiving this life as a gift and promoting the same gift in others. He stands not in the truth, because truth, for a creature, is always the harmony between the intellect and its object (adequatio rei et intellectus), such that the intellect is measured by the reality outside itself. The created intellect has truth, it contains truth, but it cannot be the truth—for that is God’s prerogative alone. In this sense, truth can only be in us, but never of us, as if we were its origin or measure.

Hence, the person who rejects the truth of God ends up evicting truth from his mind, and begins a career of falsification, both in the form of self-deception (we see how the devil throughout the Gospels and indeed across all of history acts as if he could actually defeat Jesus!) and in the form of deception of others (we see how the father of lies whips people into a frenzy of lying, manipulation, and conformism). The devil, and any of his imitators, “speaketh of his own.” He will speak only the shallow “worldly wisdom” that is his mental content; he will spout sophistry, banality, and cynicism. This is what comes of not being willing to take for his own the wiser, deeper, brighter, truer words of another—His Creator.

Lucifer, as his very name implies (“bearer of light”), was created to mirror the Word and in this way to be resplendently beautiful in his own nature. He abandoned the Word and thus became ugly in spite of his wondrous nature. A lake when still can take on the form of mountains against an evening sky, and in this way go beyond its nature of water to partake of the natures of earth, air, and fire. In contrast, a lake when turbulent and muddy in some way seems to lose the better virtues of water itself, such as its cleanliness, chastity, and ability to slake thirst. The clear lake in its reflection becomes more than itself; the muddy lake in its turbidity becomes less than itself. Herbert McCabe once remarked: “That is the theology behind the story of the Garden of Eden. There was no way that human beings could be simply human. They had to be either superhuman or inhuman.”

The holy rites are our lifeline, our umbilical cord, to Holy Mother Church; they keep us nourished and safe in the valley of the shadow of death. The original Death Valley is not in California, but in hell. Hell is truly the valley of death, because one who lives there, or rather continuously dies there, is stuck down in the depths and cannot get up to the high places, up to Mount Sion and the city of the living God. Scripture calls the fallen world in which we men are living “the valley of the shadow of death” because it is under the power—limited and destined to fail, but nonetheless real—of the Evil One.

We are delivered from his clutches by baptism; strengthened by confirmation for our battle against the world, the flesh, and the devil; fed the bread of angels in the Eucharist; cleansed of sin in penance. And in many other ways the victory of Christ and His company of saints is shared with us, so that our ascent to His kingdom may be sure.

A blessed feast of All Saints to all who are reading this!