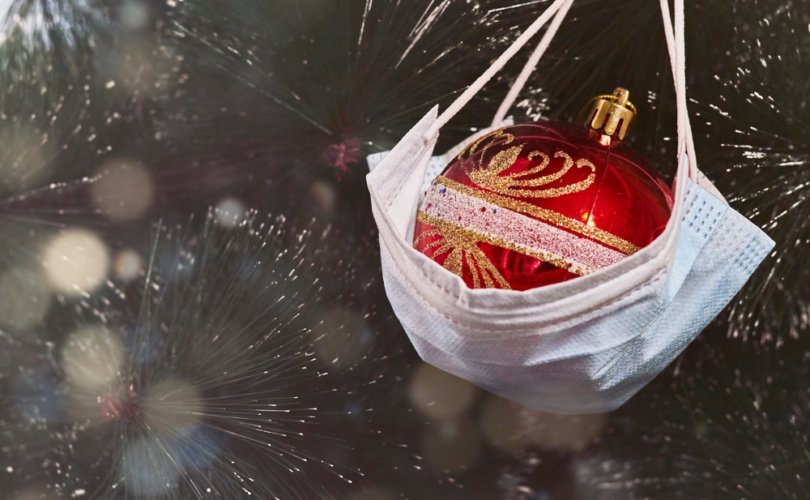 December 22, 2020 (LifeSiteNews) — Here in the UK we are getting used to headlines about Christmas being “cancelled.” These follow the plan that various earlier restrictions on ordinary life would “save” Christmas, a plan which has apparently failed. What the headline-writers have in mind is the customary celebration of Christmas.

We don’t do Thanksgiving here, so Christmas is a big deal in England. It is less so in Scotland, where after the Reformation the Calvinists didn’t celebrate it at all and people responded by making New Year (“Hogmanay”) into a secular festival of alcoholic over-indulgence. In England the Anglicans were somewhat more tolerant of vestiges of Catholic popular culture, and Queen Victoria’s spouse, Prince Albert, added a German element, making it what it is today: a festival of carols, Christmas trees, candles, family meals, Christmas pudding, “Father Christmas,” and present-giving.

You don’t have to be a believing Christian to take part in this cultural phenomenon, but it is a cultural phenomenon built, not simply on a Christian festival, like having a long weekend and chocolate eggs at Easter, but on a Christian story. It is the Holy Family, in their journey to Bethlehem, in the birth of Jesus, and the visits of the shepherds and kings, who are at the heart of the commercialized indulgence, even if this heart is sometimes hidden. In our shopping streets they can be glimpsed in the music, the decorations, and the nativity scenes. In the most secular household they are still there too, in the idea of homecoming, family, and the exchange of gifts: and in the very idea of hope at the darkest time of the year. Without Christmas, the English winter would be nothing but dark, wet, and miserable.

But Christmas also has its opponents, and every year there are little battles about secularization, lights, nativity plays in schools, and all that stuff. This year the normal celebration of Christmas is under threat from the Coronavirus: or more accurately, from the state’s response to it. The mystery of opposition to the coming of the Christ-child is expressed in the Gospels of the start of Advent, which speak of His coming in a different context: the Last Judgement. Luke 21:26 tells us that men will “die of fear” at His coming. In the traditional opening chant for Midnight Mass, we hear of the rage of the rulers of the gentiles (Psalm 2:1).

This fear and rage is not irrational. Christ comes as a tiny child, apparently helpless and vulnerable, but He is already King. He comes to displace the powers of the earth, which has been ruled for many ages by Satan: those rulers who are allies of Satan, like King Herod, who schemed and plundered and murdered his way to power, are right to be worried.

— Article continues below Petition —
PETITION: No to government and corporate penalties for refusing COVID-19 vaccine
Show Petition Text
102715 have signed the petition.
Let's get to 125000!
Thank you for signing this petition!
Add your signature:
Show Petition Text

He also comes as Judge. Not just the powerful, but everyone without exception will be judged, and this judgement will be just and complete: nothing will be left out of account.

And He comes as Savior. His displacement of Satan as the ruler of the World, and His bringing of judgement to the oppressor and the oppressed, is a necessary part of his salvific work, but the coin has another side: “The bruised reed he shall not break: and smoking flax he shall not extinguish: till he send forth judgment unto victory.” (Matt 12:20).

Whether we appear before Christ seeking His healing, or as criminals angry at having our power over others curtailed, is up to us.

For God sent not his Son into the world, to judge the world, but that the world may be saved by him. He that believeth in him is not judged. But he that doth not believe, is already judged: because he believeth not in the name of the only begotten Son of God. (John 3:17)

To forbid the “mixing of households”, which is to say, to forbid children from seeing their grandparents and cousins, and to forbid parties and gatherings, is a blow struck, however inadvertently, against the cultural expression of the mystery of the Incarnation in the heart of every town and family. And this mystery must be expressed culturally, or else it fails to make itself felt and understood in society. The normal Christmas is a time when even the secular and commercial express, for a brief moment, something of the saving message of Christianity. This year, to a large extent this will not happen. Christ will not be given the honor He deserves, except insofar as Christians make a special effort, and even this effort will be largely confined to our own homes.

In 2021, we need to find ways to take the message of the Incarnation back into the public square. We’ll know we are making an impact when we hear powerful unbelievers rage.

In the meantime, I wish all my readers a happy and holy Christmas.