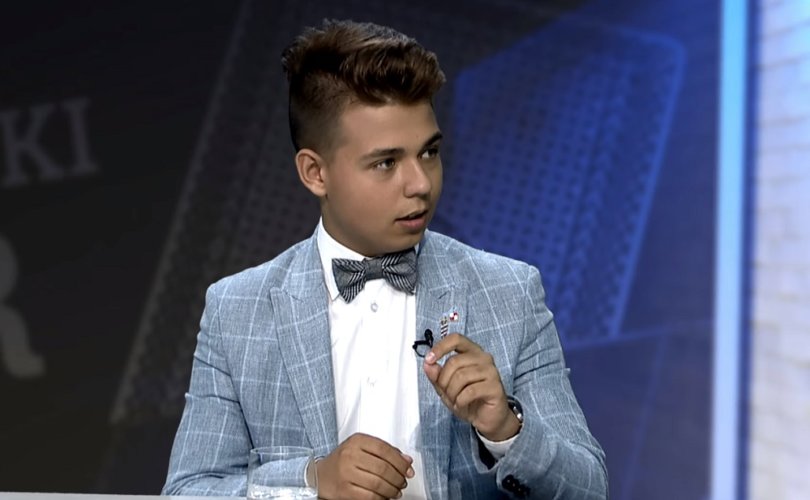 August 12, 2019 (LifeSiteNews) — A picture of a 15-year-old boy standing alone with his crucifix and rosary held high as police in riot gear and LGBT protesters march toward him has gone viral.

The photo of brave schoolboy Jakub Baryła — standing in the middle of a street as rainbow-flag waving protesters march toward him with government police leading the way — is an awesome visual metaphor, perfectly depicting the very real threat of weaponized, politicized LGBT ideology against the children of the entire world.

This picture, viewable here, is worth more than 1,000 words.

It is an echo of the iconic 1989 picture of a lone man standing against approaching tanks in Beijing’s Tiananmen Square. The Chinese communist government had called in heavy artillery in order to suppress a student-led demonstration calling for democracy, free speech, and freedom of the press in China.

It’s also an echo of the 1957 photograph in which a courageous young African-American student attempted to enter a newly desegregated Little Rock, Arkansas high school while surrounded by a mob of white racists spewing hate at her. As the crowd yelled, “Lynch her!” and “Go home, n—–!,” young Elizabeth Eckford walked alone.

Baryła stood his ground as the phalanx of heavily armed police bore down upon him. In the end, he was physically removed by police while still holding high his Crucifix and Rosary.

The drama occurred during an “Equality March” in Płock, Poland.

The 15-year-old explained afterward that he was inspired by a similar gesture made by Fr. Ignacy Skorupko during the 1920 Warsaw battle with the Bolsheviks.

He later wrote on Twitter that he held the cross to oppose the “bad deeds that are promoting homosexuality.”

“Jesus and the cross stood against evil and sins. Our holy faith commands us to counteract evil deeds. I also tried to do it. Saying that I was going against people is harmful, I was going against the bad deeds that are promoting homosexuality,” he wrote.

Baryla also said that he was highly motivated to take action after he saw a depiction of the Virgin Mary with an LGBT-rainbow halo around her head and the Polish flag profaned with the LGBT rainbow.

“Later I sat on the pavement and prayed in Latin with the words Salve Regina. I directed my prayer to the Mother of God, the ideal of purity. Policemen came to me and asked me to get out of the way. I said I couldn’t do it because the participants of the march are destroying my Catholic faith and profaning the Polish flag by placing a rainbow on it,” he told wPolityce.pl.

Young Jakub Baryła said he wanted to “give people something to think about and make them reflect.”

In our current age, the threat of transgenderism backed by government-sanctioned surgical and hormonal mutilation of children in defiance of their parents’ attempts to protect them is very real. State-coerced child gender “transitioning” is already here.

Forced government indoctrination of schoolchildren in order to make them more open to questioning their sexuality while undermining their gender identity as either males or females has become totalitarian in nature. Public libraries have become a battleground for grooming the smallest of children for transgenderism thanks to the proliferation of Drag Queen Story Hours in Western countries.

The worlds of media, global and national corporations, and even professional sports are part of the juggernaut threatening children and families.

Poland’s young Jakub Baryła is now an international symbol. His now iconic picture clearly displays the nature of the important battle we now face: LGBT ideology seeks to suppress and destroy the influence of Christianity, and it especially hates the Cross of Jesus Christ.

Ironically, as they march for “freedom,” LGBT activists seek to suppress the message of the Cross, the only means through which they might discover true freedom.

August 15, 2019, 3:51 EST correction:  An earlier version of this report stated that the student receiving insults in the 1957 photograph was Hazel Bryan when it was Elizabeth Eckford. This has now been corrected.