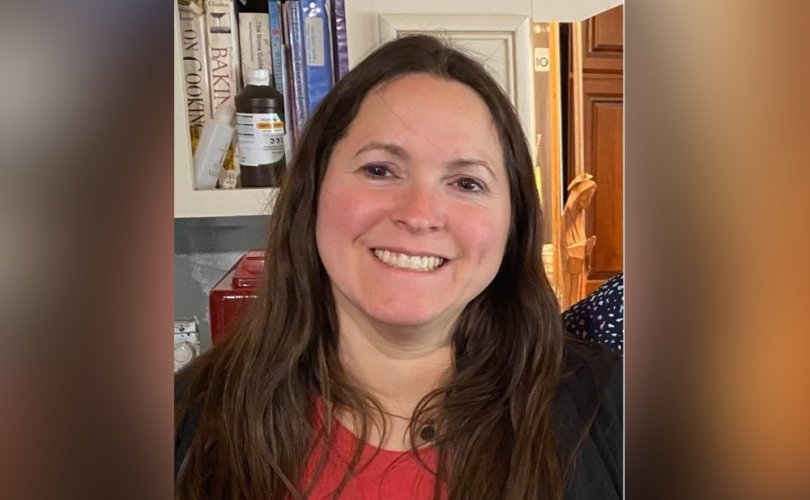 (LifeSiteNews) – I first met Jessica Hallgren a little over a year and a half ago. I noticed her the first time she came to our small chapel in Allendale, Michigan. It’s not hard to stand out here. We’re a rather tight-knit community. When someone new comes along, it’s easy to spot them.

Jessica and I struck up a conversation in the parking lot after Mass. I forget everything we discussed, but she said something along the lines of how the Latin Mass is “just so beautiful” and that things in the mainstream church “don’t seem right.” I asked her where her family was at and she told me her husband wasn’t all that interested in coming yet. She wanted to “check it out” on her own before bringing everyone else along.

As the weeks went by, Jessica kept coming back. She and I became friends, often talking about church-related topics but also my work at LifeSite. She immediately fit in at our chapel, especially with the women, with whom she made many friends. Jessica also happened to know two buddies of mine who attended the church. She was their boss about 10 years ago when they were undergrads at a college she worked at in a nearby town.

What struck me most about Jessica – like all those who are interested in Traditional Catholicism – was her simple desire to know the truth. She had an inquisitive mind and never shied away from a question, or sharing her opinion. She also had a feminine and joyful personality. She was a humble person who loved being a mom, wife, and friend.

I can’t recall exactly when, but Jessica’s husband, a chef, and their four kids, did start coming to our church. So did her parents. God was undoubtedly acting through her.

Jessica’s children (she had a total of seven) are a riot. The youngest ones are extremely sociable and have fiercely unique and strong personalities. I always enjoy bantering with them, probably more so than with the other kids at our chapel. Some of them helped me move a married couple at our church into their new house not long ago. Jessica and her children also attended a bonfire I organized this summer. Her kids played corn hole with me. Children are so fun, especially when they know how to crack a joke. And Jessica’s certainly do.

About a month ago, COVID hit our church. Like many parishioners, Jessica got the virus. But unlike other parishioners, she was seven months pregnant. Many people began offering medical advice so she could get better with natural treatments. However, her symptoms soon got to the point that going to the hospital became a necessity. Her coughing hadn’t stopped, her oxygen dropped to a dangerously low level, and she’d contracted pneumonia. “She was very concerned about the baby,” her mom told me. “That’s why she went to the hospital.”

Everyone at our chapel prayed very hard for Jessica’s recovery. At the hospital, she told the staff, “I want you to take the baby if anything happens.” Given that she wasn’t doing well, a C-section was performed. That procedure took place on Saturday, December 4.

Baby Margaret Hallgren entered this world prematurely by two months, weighing just 2 pounds 14 ounces. Margaret was given the middle name Barbara, after Jessica’s grandma and after St. Barbara, whose feast day she was born on. Thankfully, Margaret continues to improve with each passing day.

Before being put on a ventilator, a priest heard Jessica’s Confession and gave her Holy Communion. Later, she was given Last Rites. “She was prepared to go, especially in order to save her baby’s life,” her mom told me.

Jessica Hallgren passed away on Tuesday, December 14, surrounded by her parents, loving husband, and eldest daughter.

I will miss her very much. Our church, and the world, lost a loving young mom who had a long life yet to live and a beautiful family yet to raise.

I believe Jessica may well be considered a saint one day for having laid down her life for her child, and that she could be remembered in the eyes of the Church in the same way as St. Gianna Beretta Molla (1922-1962).

If you don’t know who St. Gianna is, click here to learn more about her. The short version of her story is that when she was pregnant with her fourth child in 1961, Gianna, an Italian pediatrician, was told by doctors that she had a fibroma on her uterus. They informed her that the only way to ensure that she would live would be to abort the child. She rejected that advice, telling them that the child’s life “must come first.” Gianna eventually gave birth to a little girl. A week later, Gianna died from complications. Her daughter, Gianna Emanuela, lived and is now a medical doctor.

I will continue to pray for the repose of Jessica’s soul, but know that she gave up her own life, like Christ did for us, so her child could live. “What greater love have than this, than to lay down one’s life for a friend,” John 15:13 says. How could God not reward Jessica with anything other than eternal bliss? I’ll be asking her to pray for and to protect me the rest of my life.

There’s currently a GoFundMe campaign raising money for Jessica’s husband and their many children, who are in dire need. Click here to make a donation. The family is currently without a home – they were in the middle of moving when COVID hit – and require assistance to cover funeral costs, medical expenses, food, and other basic necessities. Please, in your charity this Advent season, help this family of modest means that needs support now more than ever.