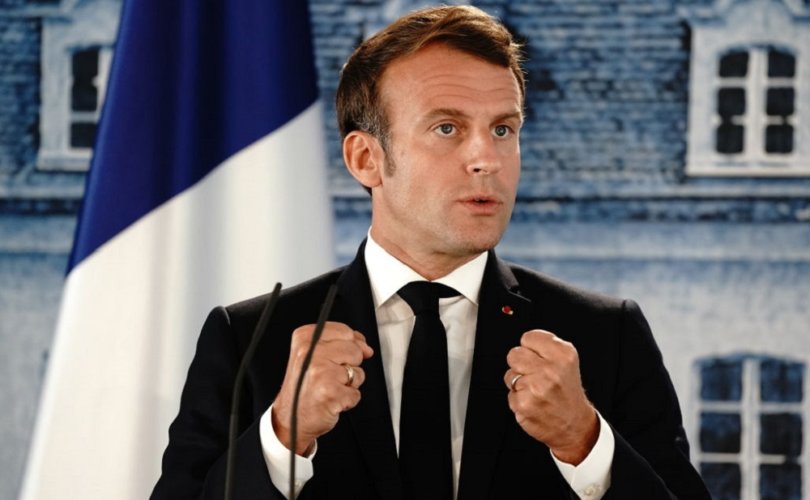 (LifeSiteNews) — “The unvaxxed, I really feel like pissing them off. And so we’re going to keep on doing that, to the very end. That’s the strategy,” French president Emmanuel Macron said Monday in an interview with the daily Le  Parisien, setting off waves of shocked reaction even beyond the circle of media and political personalities who are fighting the battle against a COVID vaccine pass the government is set on imposing on the population.

Macron went even further, with perhaps a more outrageous declaration: “When my liberty becomes a threat to the liberty of others, I become an irresponsible individual. An irresponsible individual is no longer a citizen.” He accused the “anti-vaxxers” of committing an “immense moral fault”: “They are undermining what constitutes the solidity of a nation,” he said.

With the extreme rejection of all those who refuse the experimental COVID jabs in France – 5 to 6 million people age 12 and up, according to official figures – qualifying them as non-citizens, that is, people without legal and constitutional rights, Macron has truly revealed the purpose of the “disguised vaccine obligation” threatening France.

“When you’re no longer a citizen, what are you?” a commentator asked on the usually 100 percent pro-Macron news station, BFMTV. “Are you a sub-citizen, a fallen citizen, a nobody?” He added that Macron himself said on December 27, 2020: “I’ve said this before, and I repeat it: The vaccine will not be mandatory. Let’s trust our researchers and doctors. We are the land of the Enlightenment and of Pasteur. Reason and science must guide us.”

Ivan Rioufol, one of the star columnists of Le Figaro who is personally opposed to the COVID shot, tweeted: “Under the Terreur (1793), the Law of Suspects required good citizens to have a ‘certificate of civism.’ The #VaccinePass that #Macron wants to impose is in keeping with that discriminatory logic. For him, an #unvaccinated ‘is no longer a citizen.’ An arsonist is in the Elysée.” Rioufol added the hashtag: “MacronDestitution,” “impeach Macron.”

The number of “non-citizens” brushed aside by Macron’s brutal insults is much higher than the supposed official figure of 5 million. In order to obtain the “vaccine pass” currently under debate at the National Assembly, “full vaccination” is required. This means having the original doses plus as many booster shots as the government deems necessary within a time lapse that is also determined by the authorities.

At present, the third dose is necessary seven months after the second shot in order to keep the benefit of the vaccine pass. Twenty million people could be involved if they decide not to get the third dose.

The government said the pass is expected to be compulsory in order to go to restaurants, cafés, theaters, cinemas, sports venues and other leisure venues, to practice sports – even outdoors – and to use long-distance public transport. In replies published Monday to Le Parisien readers, Macron said about the “unvaxxed:” “You have to tell them: from January 15th, you will not be able to go to the restaurant, to have a drink, to go to the theater, to the cinema … ”

Many commented on his incredible statement aiming to segregate one part of the population from the other and depriving them not only of their rights but the most elementary consideration for the people he is supposed to preside over without discrimination and irrespective of who they are.

Whether they actually do this is beside the point. At least it is a way of proclaiming the theoretical equality of citizens before the law. This fundamental given of French political life has been wiped out by Macron in a few violent  phrases, at the exact moment when the state of law has been annihilated.

As Macron himself recalled in his interview, the COVID jab is not mandatory (it would be too complicated, he said). There is no legal obligation to get the shot. But not getting it is seen as a “moral fault” as defined by the authorities, and this fault “justifies” depriving a large portion of the population of their fundamental liberties.

Beyond Macron’s contempt for those who refuse to take an experimental jab (the mRNA “vaccines” by Pfizer and Moderna will not have completed their safety and efficiency studies before the end of 2022) under constraint from authorities who have acknowledged that the shots cannot prevent COVID-19 from circulating, his deliberate vulgarity was widely condemned.

His exact words, “les non-vaccinés, j’ai très envie de les emmerder … ” (“the unvaxxed, I really feel like pissing them off”), in their literal meaning signify “I really feel like covering them with shit.” I would have preferred not to use these words in a LifeSite story, but in the interest of truth and exact reporting, they show to what lengths the French president is willing to go in order to vilify COVID-vaccine dissidents.

“Emmerder” is a word used (but not in polite society) either to describe how annoyed you are by something or someone; in its transitive sense, it describes the extent of the actions you are willing to take in order to aggravate, frustrate, madden, f… generally make ordinary life impossible for someone you can’t stand.

Macron’s provocative and hateful words were timed to be published once the National Assembly would have voted for the government’s draft law on the vaccine pass. His interview with Le Parisien took place several days back and was scheduled to come out Tuesday evening once the bill would have been adopted in the night from Monday to Tuesday.

In a surprise move, the opposition forced a suspension of the debate on Monday evening after complaining that the French would not understand that a law so detrimental to their freedoms could be adopted in the middle of the night by only a handful of parliamentarians.

Aurore Bergé, a member of the presidential La République en Marche party, acknowledged as much, telling the media that Macron’s interview unfortunately came during the debate because of “dilatory” measures on the part of the left- and right-wing opposition.

Macron’s words prompted a new suspension on Tuesday evening, with opposition members demanding that Prime Minister Jean Castex “explain” what Macron is up to. After waiting for two hours, they put the debate on hold.

Castex finally turned up on Wednesday and doubled down on Macron’s violent charge. “There’s a difficulty with those of our fellow citizens who refuse to get the vaccine. Saying this does not insult anyone, and it’s the reality that the president of the Republic wanted to recall,” he said. “Citizens of the Republic must exercise their responsibility. To be responsible, to be free, means not to contaminate others with impunity.”

Nonsense, of course. The “vaccinated” can catch and transmit COVID and in most situations are exempt from proving their negative status. As for statistics that “90 percent” of patients in ICU’s at this point are unvaccinated, it is now clear that the health minister is playing on words, as the double-vaxxed who have not received a “booster” shot are being counted as unvaccinated.

Castex is now asking the Assembly to speed up the debate, but it has already been decided that the Senate will postpone its reading of the bill until next week. This is only a gain of a few days, but it could prove crucial as the government appears to be racing against time in order to have the bill adopted before it becomes clear that the Omicron variant, which is highly infectious, especially among the vaccinated but also very mild for all but the very frail, is offering true natural immunity against COVID-19. Meanwhile, the mRNA “vaccines,” apart from their multiple adverse events, are not stopping infections and severe COVID cases.

An increasing number of French citizens now realize, thanks to Macron’s insulting rant, that the objective of the vaccine pass is not sanitary at all but political.

One amendment to the government’s bill, presented Tuesday, suggested that air purifiers should be encouraged in public closed spaces. All the LREM presidential party members voted against.