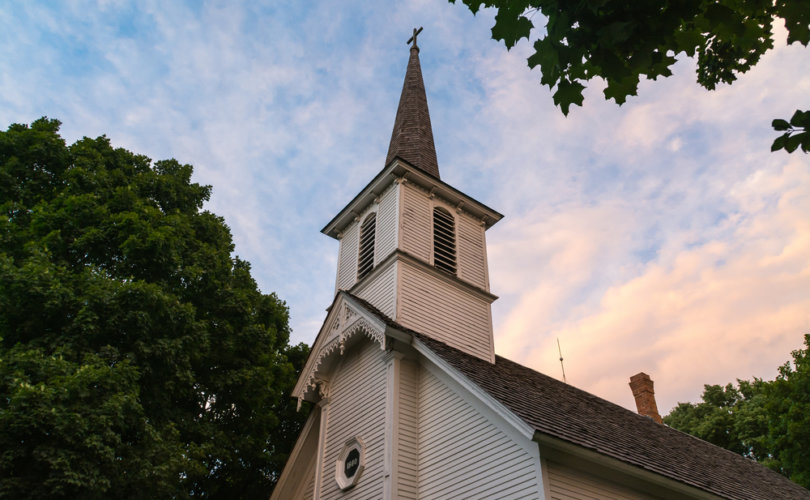 (LifeSiteNews) — Some of you may remember that back in 2019, a tattooed, pierced clergywoman with purple hair presented a sculpture to abortion activist Gloria Steinem at the 2019 Makers conference. Nadia Bolz-Weber of the Evangelical Lutheran Church in America had taken hundreds of purity rings, had them melted down into a vulva emerging from a throne of flames, and given it to Steinem because the feminist’s writings had “changed my life.” Bolz-Weber’s own 2019 book, Shameless: A Sexual Reformation, was … well, shameless.

When the story was covered by conservative media at the time, many people shrugged it off — how hard is it to find another “pastor” from a dying mainline Protestant denomination declaring loyalty to the sexual revolution in outlandish ways? Besides, these folks are the fringe. Most clergy in mainline churches are nice, elderly ladies who just want everyone to feel warm and fuzzy and play dress-up with colorful vestments. Bolz-Weber might be a flamethrower, but she was still an aberration.

That, of course, is not the case. The author of Shameless who named one of America’s most prominent abortion activists (a woman who dedicated her memoir to her abortionist, no less) has been named by the Evangelical Lutheran Church in America (the largest Lutheran denomination in the U.S.) has now been named to the role of “pastor of public witness” by the Rocky Mountain Synod of the ELCA.

Or, as the Episcopal News Service described her: “Bolz-Weber, who has often attracted controversy, is perhaps best known for her New York Times bestselling books, including Shameless: A Sexual Reformation and Pastrix: The Cranky, Beautiful Faith of a Sinner & Saint, the prayer- and profanity-filled memoir of her journey from alcoholic stand-up comic to Lutheran pastor.”

Man, I wonder why mainstream Protestant churches are dying off. I’m looking forward to an expensive, thousand-page report explaining that it’s because young people think they’re too judgy and really need the church to abandon teaching traditional biblical sexuality and go woke, instead. Because that’s been working out really well so far.

So well, in fact, that the same denomination made news again recently with the announcement that they have installed their very first (but surely not the last!) “openly transgender bishop” in an ordinations service held, appropriately, in San Francisco’s Grace Cathedral. The “Rev. Megan Rohrer” will now head up one of the ELCA’s 65 synods with oversight of nearly 200 congregations in both northern California and northern Nevada.

Rohrer’s message to the congregations was precisely the sort of thing you’d expect at this sort of thing: “My call is … to be up to the same messy, loving things I was up to before. But mostly, if you’ll let me, and I think you will, my hope is to love you and beyond that, to love what you love.”

If that’s not inspiring, I don’t know what is. At this point, the ELCA is a TikTok page run by the Human Rights Campaign — a denomination of 3.3 million members that has caved so fully to the spirit of the age that it is rapidly becoming difficult to tell the difference between a church service and Drag Queen Story Hour (something that is no doubt coming to nurseries across the ELCA in no time at all.) These churches are leading their dwindling flocks astray with promises that what God wants is for them to do whatever they want and be whoever they want to be.

The good news, at least, is that they’re being open about who they are. The wolves in sheep’s clothing have shed their fleeces, and nobody sitting in their pews can pretend to be deceived.