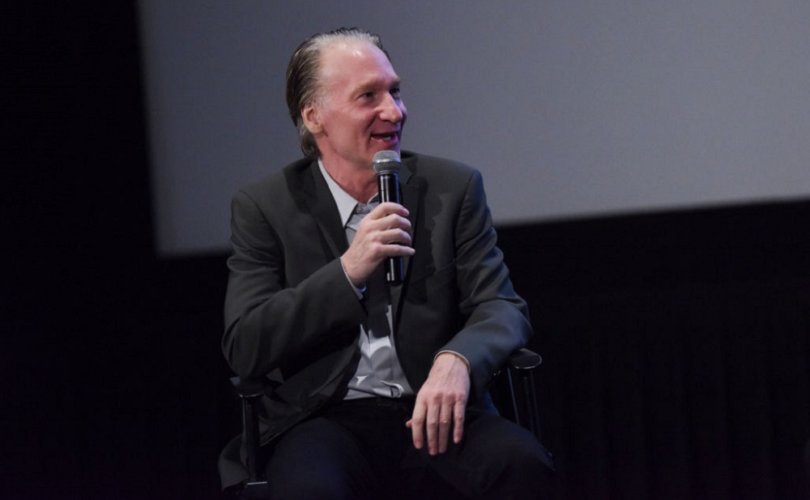 November 22, 2019 (LifeSiteNews) — The transgender train is now rattling along at such breakneck speeds that even many liberal commentators cannot keep pace with the rate of progress. Exhibit A is an exchange between HBO’s Bill Maher, host of Real Time with Bill Maher, and bestselling author and radio host Dennis Prager. During a spirited debate on Maher’s show on whether the Right or the Left was more guilty of deceiving the public in modern America, a visibly angry Prager launched into a scathing tirade on one of progressivism’s insane new dogmas: the idea that men can actually be women and are entitled to be treated as such.

“To say that men can menstruate is a lie, and that is now, that is what is said,” Prager told Maher and the panel. Maher looked genuinely confused and then mockingly sceptical. “Wait, wait, wait, where did that come from?” he chuckled.

“Check it out, folks,” Prager responded, raising his hands as his fellow panelists and the audience roared with laughter. “Check it out: anyone who says a man cannot menstruate is transphobic.”

“I missed this whole story,” Maher interjected. “Tell me, where are you getting this?”

“Just Google it,” Prager told him. “Google: Can men menstruate.”

“Who is saying this?” Maher scoffed. “You’re talking about a very small percentage…”

“Then how do you allow men, biological men, to run against women in the races in Connecticut and set all the high school records?” Prager asked him.

At this point, Maher must have realized that he might be inadvertently heading into transphobic territory, where angels fear to tread. “Okay, I agree with you on that,” he interrupted, “but the way you frame it is nonsense.”

“No, I framed it perfectly accurately,” Prager informed him.

Maher was shaking his head. “No, you didn’t. What you’re talking about is someone who is transgender — was a man, now claims to be a woman” — here Maher inserted air quotes that he will probably live to regret once the cancel warriors catch wind of it — “is a woman, okay, beating the dog s— out of other women in the race because they have more muscle mass, and even Martina Navratilova came out and said this is ridiculous, you might as well not have women’s sports. This is a far cry from saying men can menstruate.”

“I agree, I agree,” Prager said, putting his hands up.

“But that’s not where anyone went with that but you!” Maher said to laughter. After a few more attempts by Prager to cite evidentiary examples — such as the fact that tampon dispensers have been placed in the men’s bathrooms at U.C. Berkeley — Maher cut the conversation short, patting his arm and chuckling, “Dennis, I remember you in the old show, and you were a little more reasonable.”

“What did I say that was unreasonable?” Prager asked.

“You said that we think that men menstruate, and no one does!” said Maher, turning to Ronan Farrow for support: “Have you heard about it?”

“I missed that one, I confess,” Farrow reassured him.

“I will make you a friendly bet that the LGBTQ normative statement is that men can menstruate,” Prager stated, and Maher swiftly moved into a different topic.

Bill Maher was wise not to take Prager’s bet. On November 19, International Men’s Day, the American Civil Liberties Union sent out a tweet echoing almost word for word Prager’s rendering of LGBT beliefs: “There’s no one way to be a man. Men who get their periods are men. Men who get pregnant and give birth are men. Trans and non-binary men belong.” It was retweeted over 3,500 times and “liked” nearly 16,000 times.

Brett Weinstein, an atheist liberal and a member of the “Intellectual Dark Web,” flagged the tweet and tagged Bill Maher and Dennis Prager, sending a follow-up with a link to the conversation. “Here is the exchange I’m highlighting,” he tweeted. “No intent to embarrass Bill Maher. He clearly didn’t know how widespread this craziness has gotten. But he needs to know.”

Indeed, he does, and I wonder if he’ll bother to respond. Considering the industry he works in, I very much doubt it, although Bill Maher is one of the few who occasionally surprises me by tackling subjects most liberals won’t touch with a ten foot pole. The fact is that many old-guard liberals are as bewildered as the rest of us by the radical LGBT totalitarians (Maher himself once referred to them as a “mafia,” willing to “whack” those who disagree with them), but they have to decide whether they’re willing to tell the truth as they see it and find themselves shoved out of polite society and damned as irredeemable bigots. Understandably, most find it easier to simply play along.

That is why I don’t have much confidence that the common-sense liberals who find all of this gender fluidity stuff to be nonsense will prove to be allies in the culture war — at least not most of them. The few who have bothered to speak up, radical feminists like Meghan Murphy, Julie Bindel, and Germaine Greer, or even liberals like Dave Rubin, end up being forced to associate primarily with conservatives, who decline to demonize or silence them. Most liberals simply have too much to lose to take on the transgender movement, especially as the LGBT crowd has the entertainment industry by the throat and the Democrats on a leash. Why bother to throw away your gala invites, your movie premieres, your parties in the Hamptons and Hollywood, just to state the obvious truth?

In the end, almost all of the old-guard liberals will pathetically fall into line — the spectre of poor old Joe Biden struggling to keep up with the pace of change is one prominent and cringeworthy example. Most of these people had no idea that they would one day be required by the progressivism they championed to believe — and publicly affirm — that men can menstruate, yet here we are. If they are really honest, deep down, they probably don’t believe it. Maher certainly doesn’t. Some of them are probably even wincing inside as they thunder their support for the rights of the non-binary and transgender folks, whom the seventy-year-old law school professor Elizabeth Warren called “the backbone of our democracy.” But it won’t matter, because they’ll say it anyway — and turn on us with a vengeance for shaming them by refusing to join them in charade the LGBT movement is attempting to force our culture to play.

The Big Lie demands participation from everyone, and the elites are all in.

Jonathon’s new podcast, The Van Maren Show, is dedicated to telling the stories of the pro-life and pro-family movement. In today’s special episode, Jonathon speaks with Covenant Eyes leader Dan Armstrong about Lamar Odom’s exclusive interview highlighting his pornography addiction. Odom spoke with Covenant Eyes about his severe addiction to pornography. You can subscribe here and listen to the episode below: