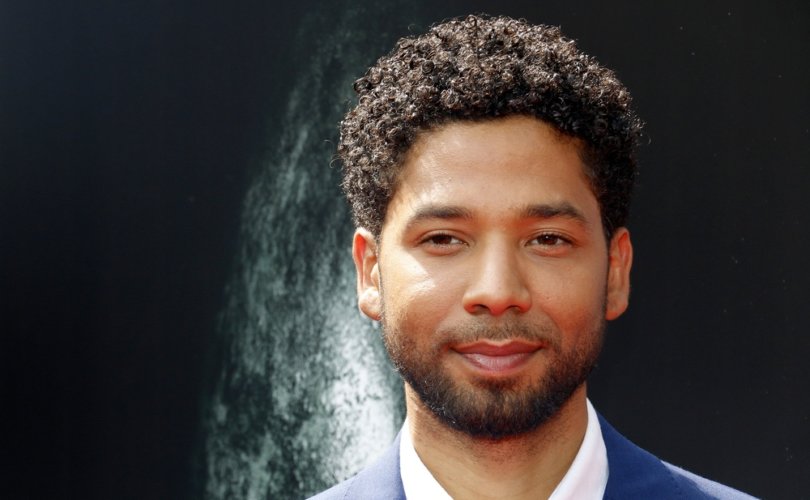 Jussie Smollett at the Los Angeles special screening of 'Alien: Covenant' held at the TCL Chinese Theatre IMAX in Hollywood, USA on May 17, 2017.Shutterstock.com

February 21, 2019 (LifeSiteNews) – When news broke that openly homosexual Empire star Jussie Smollett was attacked in the Democrat-owned and operated city of Chicago by two white men shouting pro-Trump slogans, I had my doubts.

I always find it helpful in these situations to ask, “who benefits?”

Turns out those instincts were right. Smollett’s tale has turned out to be an elaborate fabrication. “Fake news!” as President Trump likes to say.

One has to wonder how many other stories the media feeds us that are pure fiction.

When I first read the headlines, I had no clue who this fellow was. Probably because I don’t watch a lot of television (maybe a half-hour of Tucker Carlson once in a while). Most of my free time is spent eating with friends or at the nearby adoration chapel (there are no occasions of sin when you “watch” the Body of Christ).

Regrettably, most Americans spend too many hours in front of their televisions, or, as a priest I know calls it, “the devil’s tabernacle.”

Several years ago, I was teaching political science at a local community college. While lecturing about the media, I asked my students to keep their hands raised if they had 1, 2, 3, 4, 5, or 6 television sets in their house. Sure enough, everyone had at least 2. Astonishingly, almost all of them kept their hand up when I got to 4. A few of them, seemingly embarrassed, admitted to living in a home with 6 televisions. One had 7!

“No wonder they don’t do the assigned reading,” I thought to myself. “They don’t have the attention span for it. They’ve been lobotomized by watching TV.”

The Christian life, simply put, is not the life of television. Christians must work out their salvation with fear and trembling. They are called to go forth and preach the Gospel, perform acts of mercy, and, as St. Peter tells us, be ready to explain their faith. The sloth-inducing, sin-filled programs on television today war against this supernatural battle in every way by dulling our minds and making us comfortably numb to the sufferings around us. A sedentary life results.

The devil knows we will be held to account for the gifts we have been given. He wants us to not use our talents and to waste the time God has gifted us by mindlessly surfing the internet and consuming as much television as possible in this life.

But consider that no one on their deathbed ever said, “I wish I watched more television.” What almost everyone says is that they wish they spent more time with family, doing penance, or praying.

Does this mean television is an inherently bad thing? No. It can be used to teach the faith, which is sorely needed in this apostate age. It can also be used as a leisure activity, but in moderation.

But how many people enjoy television in moderation?

Despite almost everyone saying it’s “just a way to relax,” my hunch is very, very few people properly use a TV. If anything, television is an addiction to escapism, and sin, that many people rearrange their entire life around, often to great neglect of other, more important duties, like spending time with their children.

A recent study published by the Journal of the American Medical Association found that screen time has doubled for children under the age of 2 since 1997. Daily screen time has increased from 1.32 hours in 1997 to 3.05 hours in 2014, with television accounting for over 2½ hours of screen time in 2014 compared to a mere 30 minutes in 1997.

In other words, kids are being plunked down in front of a TV while mommy and daddy go about their day. This is profoundly disturbing, especially given that too much screen time can delay a child’s cognitive, language, and social development. It can also disrupt their sleep patterns.

It’s for good reason that, in 2016, the American Academy of Pediatrics recommended avoiding screens altogether for children under 18 months.

To my knowledge, there’s not a lot of Christian literature on the dangers of television. A book titled “Air Waves from Hell,” was published on it by a Catholic priest in 1991. But not much else seems to have been written in recent decades.

Thankfully, Angelus Press has a book for sale titled, “Television: The Soul at Risk.” In less than 70 pages, it effectively unmasks the truth about TV.

Written by Isabelle Doré, a French mother of a large family, the book’s main thesis is that television is like a drug, negatively affecting our brains, especially those of little children, who need real-life interaction to properly develop their senses.

Relying on science and theology, Mrs. Doré debunks the myth that television is just something we do to pass the time. Television and its flashing sights and sounds puts the brain into a hypnotic state, exposing us to and getting us hooked on a false reality. It can easily cause us to neglect our duty of state (spending time with our spouse, for instance) and is often a disinformation tool used by the media.

Although the French-to-English translation makes reading a bit clunky, Doré's book gets to the heart of the issue: people today can’t seem to function unless the have television in their life.

The book is well worth reading and can be done in less than 90 minutes, which is about the duration of most movies today.

My hope is that more people will put down the remote, stop watching TV (especially shows like the one huckster Jussie Smollett is on), and get back to real life – conversations with friends, board games with children, gardening, the opera, and, ultimately, God.