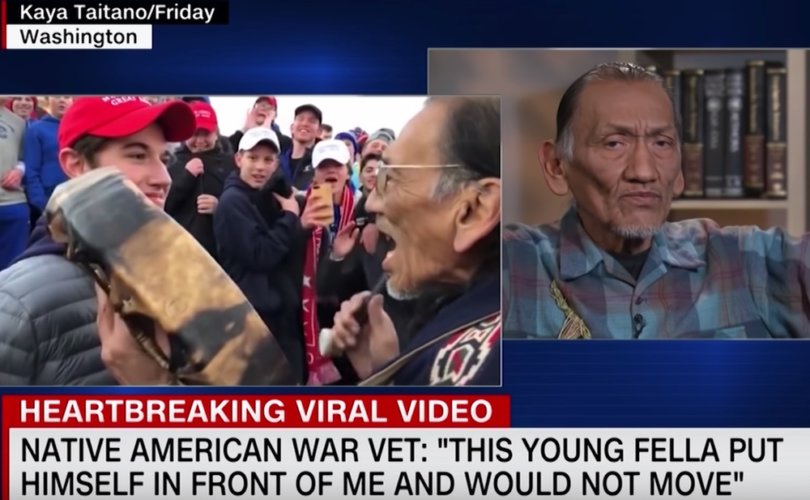 January 21, 2019 (LifeSiteNews) – Did you read the one about the pro-life kids who were verbally abused by a bunch of racist adults, intimidated by another group of racist adults who forced their way into their midst, and then virtually lynched by a Twitter mob?

I hope you did. Because that’s not the way the story was told by the mainstream media. In the mainstream media story, now thoroughly discredited by video evidence, a gang of white, Catholic, Trump-supporting, American boys, emboldened by feelings of “entitlement” and “toxic masculinity,” harassed a group of elderly African-Americans and then surrounded an elderly Native American widower, smirking in his face as he tried to make his way to the Lincoln Memorial (or to “heal” the situation, depending on which newspaper he spoke to).

Fortunately for the boys of Covington Catholic High School, there are two hours of video footage that exonerate them from the slanderous accusation made against them. The evidence directly contradicts both the story told by activist Nathan Phillips (whose claims about his military service also deserve some scrutiny) to the Washington Post and also the new story he told the Detroit Free Press. It supports the accounts of the boys of Covington Catholic High School themselves, most notably that of Nick Sandmann.

Speaking of the members of the Black Hebrew Israelite sect he had the misfortune to meet, Sandmann reported:

“The protestors said hateful things. They called us ’racists,’ ‘bigots,’ ‘white crackers’, ‘faggots,’ and ‘incest kids.’ They also taunted an African American student from my school by telling him that we would ‘harvest his organs.’ I have no idea what that insult means, but it was startling to hear.”

The video footage shows that the Black Hebrew Israelites also screamed at the Native Americans, calling them “idol worshippers,” before abusing the Covington Catholic kids.

Sandmann also reported that one of the people with Phillips told white high school students that the U.S. was not their land and they should “go back to Europe.”

You can hear these racist taunts clearly on the video footage.

One thing about LifeSiteNews: we know how quick the mainstream media is to spread news or, in this and many other cases, fake news that discredits the pro-life movement.

We’re seasoned pro-lifers, we read the news about pro-lifers, and we talk to the pro-lifers in the news. We don’t sugar-coat, either. If a pro-life leader, like a Catholic bishop, for example, messes up, we report it – but we do our best to talk to him, her, or his or her spokesperson first. But we are also highly skeptical of any mainstream media story showing any pro-life person or event in a bad light. We wish Archbishop Kurtz of Louisville, Bishop Foys of Covington, and a number of Catholic priests and pundits shared that skepticism.

This is why the world needs LifeSiteNews: when the mainstream media lies, we tell the truth.

If nothing else, the kids of Covington Catholic High School have had an unforgettable lesson in media literacy. I was in high school myself when I discovered that the mainstream media lies about pro-lifers. It was 1990, and a Toronto television news reporter incorrectly reported a pro-life demonstration I had been at myself. Later I was cut to the heart when Mark Daly of Toronto’s City TV, whose distinctively deep voice thousands loved, spoke disparagingly of pro-lifers at a rally. As far as I know, none of us had ever met Mark Daly, but he thought we were contemptible, and he wasn’t ashamed to say so.

Of course not. It was Canada.

It was hard to be a Canadian pro-life street activist when I was a teenager, and I was only ever arrested for it once. Some of my fellow teenage activists were in and out of court for chaining themselves to clinics, and a number of them went to prison. A policeman dragged one of us girls by her hair down the staircase of an abortion business.

All American and Canadian pro-lifers of the 1980s and 1990s know these and worse stories.

We also can list off the abusive chants and taunts we heard over and over again from pro-abortion activists and rent-a-mob types. Believe me, we were not spared obscenities and blasphemies because we were kids.

“Remember this address, girls,” shouted an awful man outside one of Toronto’s abortuaries. “You’ll be needing it when you get knocked up.”