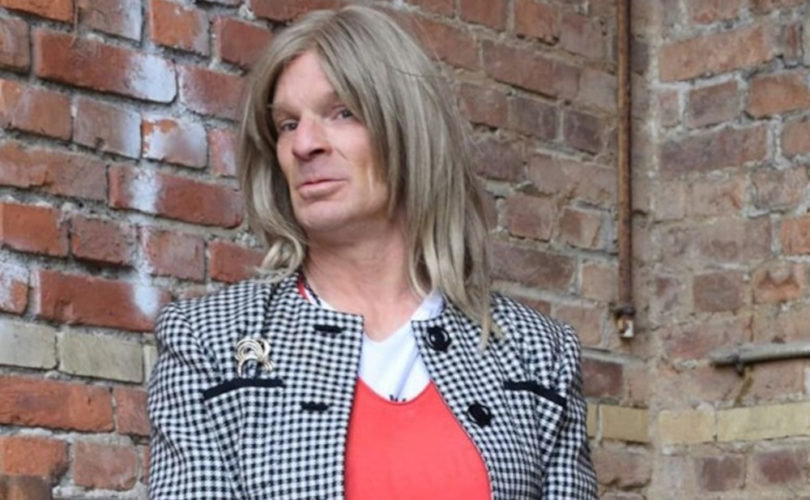 Thanks to Pope Francis and our bishops, this guy thinks he can be a Catholic nunVRT NWS Facebook photo

April 13, 2021 (LifeSiteNews) — “A 46-year-old Catholic man in Belgium who identifies as female is pushing to gain entrance to a convent as a nun where he hopes to live the remainder of his life as a religious sister,” reported my colleague, Pete Baklinski, last week.

“Eefje” Spreuters told Radio 2 Antwerp, as reported by VRT.be, that “everywhere I register, the sisters are enthusiastic. But it is not allowed by the rules” for a man who believes himself to be female to enter the convent.

This man’s twisted desire to become a nun didn’t come out of nowhere and it can’t naively be attributed to pop-culture forces.

It stems from the very fertile environment our prelates have created for sexual confusion to flourish.

While the teaching of the Catholic Church on sexual matters is perfectly clear, our prelates are not.

Let’s drop the pretense of faithfulness to Church teaching once and for all: Catholic prelates have a soft spot in their heart for feminine men, masculine women, and sodomy.

The fish stinks from the head down

First and foremost, this male-nun daydream is a reflection of Pope Francis’ softness and jocularity on the topic of transgender men and women.

Last year, Pope Francis praised a nun in South America for opening a residence for ‘trans women’ — men who choose to identify as women — referring to the men as “girls.”

Sister Mónica Astorga Cremona, known locally in Argentina as the “Nun of the Trans,” had cut the ribbon on a new complex of apartments dedicated solely to housing men claiming to be women and their partners.

Upon hearing the news, the Pope responded, according to the nun, “Dear Mónica, God who did not go to the seminary or study theology will repay you abundantly. I pray for you and your girls.”

Again, the Supreme Pontiff, according to the nun, referred to the males, reported to be between 40 and 70 years old, as “girls.”

Pro-LGBT Jesuit priest Fr. James Martin SJ was delighted with the Pope’s congratulatory words to Sister Monica Cremona, saying in a tweet: “Wow. Pope Francis sends his support for a Catholic sister in Argentina who ministers to transsexual women.”

— Article continues below Petition —
PETITION: Ask Pope Francis to clarify and rectify scandalous remarks on homosexual civil unions
Show Petition Text
22714 have signed the petition.
Let's get to 25000!
Thank you for signing this petition!
Add your signature:
Show Petition Text

In 2016, Pope Francis referred to a woman who had undergone a sex-change operation as a “man,” and also referred to her as having “married” another woman and admitted to receiving them in the Vatican.

“He that was ‘her’ but is he,” explained Pope Francis, multiplying the confusion of his already confounding words.

“The bishops are to blame”

But it’s not just Pope Francis. This Belgian man’s surreal plight is also a reflection on the sexual confusion perpetrated by many European and U.S. bishops.

Over the last few years I’ve covered several United States Conference of Catholic Bishops (USCCB) general assemblies. These are not men prepared to lead the Church and do battle with Satanic forces; USCCB meetings are quilting conventions, coffee klatsches. With just a few exceptions these are soft academics, ill prepared to inspire men to be men of God.

“Our Church is fast becoming an institution devoid of men; a patriarchy devoid of patriarchs — true fathers,” wrote Leila Marie Lawler and Leila Miller in a scathing rebuke of Catholic men in general and our bishops and priests in particular.

The faithful who want to worship as God commands are weary. We thought the bishops’ complicity in sex abuse, finally exposed in the Summer of Shame of 2018, was the watershed moment. We were wrong. The situation is not better today. It is worse. And as before, the bishops are to blame, this time by inappropriately imposing obedience (often through their subordinates, not directly) on purely prudential matters.

Regarding the hierarchy’s response to the COVID-19 pandemic:

[O]ur hierarchy ran in panic at the first hint of danger, and then added a new form of abuse, for which (with few exceptions) they have neither apologized nor repented. We now have dioceses resuming Mass in the U.S. for the most part (not all!), but most with bizarre and arbitrary restrictions still in place, and the threat of taking it all away again still hanging over us.

Most troubling of all is the strangely naïve and imprudent cooperation with the state to pressure or require the faithful to accept the COVID-19 jab. Using their moral authority to persuade the doubtful, our clergy seem to see no danger looming as those who choose not to accept the vaccines will be relegated to a lower stratum in the new caste system — or outright banished. A soft dictatorship based on medical status is upon us, and our bishops are enthusiastically welcoming it.

“A priest recently said of the U.S. bishops, that, with very few exceptions, we could not find a more effeminate group of men if we tried,” reported Lawler and Miller.

In recent weeks, LifeSiteNews has reported:

It’s clear: The softness of our Catholic hierarchy on sexual matters amplified by their own velvety smooth personal softness has led “Eefje” Spreuters to believe he has a right to become a nun.