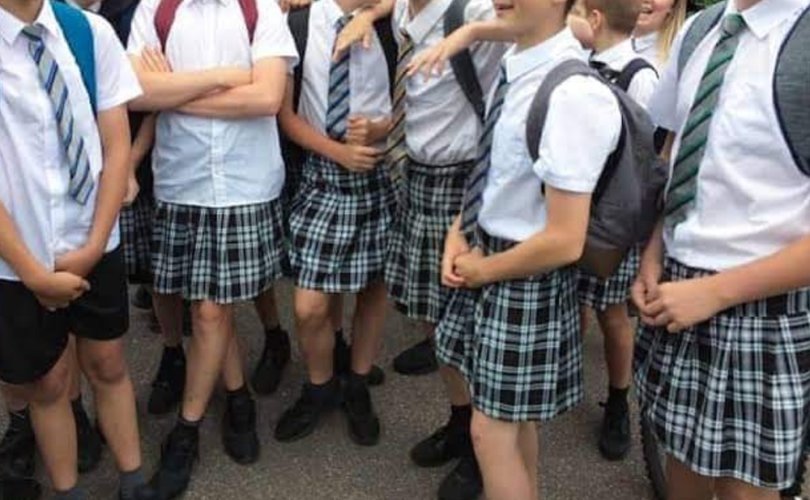 SCOTLAND (LifeSiteNews) – A couple of years ago, the Independent reported that 40 secondary schools in England had actually banned girls from wearing skirts to school. Other schools, too, were considering a skirt ban as part of a shift to gender-neutral uniforms that could be considered more inclusive of the ever-growing population of transgender students. Non-conforming students could expect the school to conform to their non-conformity.

A primary school in Scotland has taken precisely the opposite approach, asking both girls and boys to come to school wearing skirts for a day as part of the “Wear a skirt to school” campaign. The cross-dressing initiative is modeled on a similar Spanish campaign (“La ropa no tiene género,” or “Clothes have no gender”) which was launched after a 15-year-old male student was apparently referred to a psychologist after wearing a skirt to school.

The campaign was allegedly student-driven (I wonder where they got their ideas about clothes and gender fluidity from?), but teachers enthusiastically participated. One teacher at Castleview Primary tweeted that “P6 have been learning about the importance of breaking down gender stereotypes,” because you’re never too young to join the revolution and get indoctrinated into gender ideology. The same teacher noted that: “We absolutely do not want to force anyone to wear something they’re not happy with but we’re hoping lots of you will be keen to help spread our important message. Trousers under skirts are allowed!”

Parents were, understandably, divided on the campaign, but an Edinburgh Council spokesperson offered their support: “As Scotland’s capital city we are fully committed to promoting equality and diversity, and are keen to increase respect, tolerance and understanding especially in our schools. We want to ensure all our schools are inclusive and Castleview are carrying out a lot of positive work to promote equality across all their year groups.”

While the cross-dressing was not compulsory, school staff very much encouraged it. “Gentle reminder to all @Castleview_PS staff and pupils that tomorrow is Wear a Skirt to School Day,” one teacher tweeted. An email to the parents from Castleview Primary stated that “We want our school to be inclusive and promote equality.” In other words, children were free to not promote equality and not to be inclusive, and that was their right. But the school and staff made it crystal clear that those who did so would be celebrated.

Photos of awkward young boys wearing girls’ skirts soon showed up on social media, prompting general disgust. “Leave the kids alone!” one user tweeted. It was a sad picture—adolescence is confusing enough without boys being pressured into wearing skirts and dresses in order to make adult LGBT activists feel better about themselves. If anyone had said ten years ago that gender ideology would result in primary school boys wearing skirts to school, they would have been accused of being fear-mongering and hateful bigots.

Yet here we are.