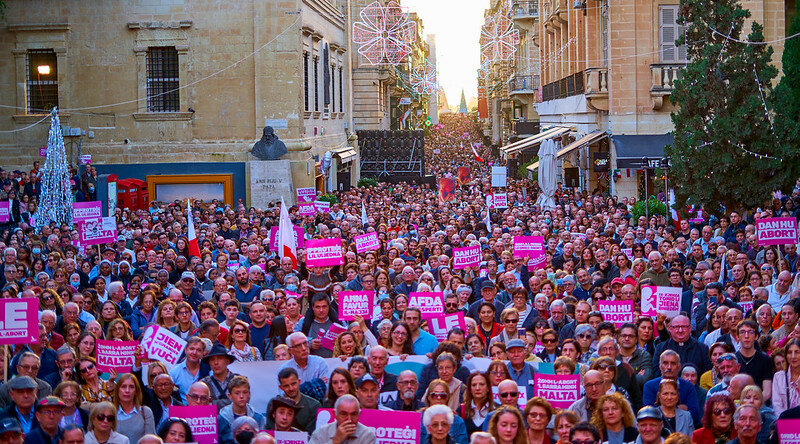 (LifeSiteNews) — Twenty thousand people — a full 4 percent of the population — took to the streets in Malta to support that nation’s pro-life laws and to protest the government’s tabling of a bill to introduce abortion. Twenty-four thousand people have signed a petition calling on the government of Malta to reject the current proposed legislation in favor of an alternative amendment clause drafted by 80 leaders and academics in medicine, law, and ethics.

During the protest, a large photo of a preborn child was placed outside the office of Malta Prime Minister Robert Abela, and attendees included a Catholic bishop, the leader of the conservative opposition, and former center-left president Marie Louise Coleiro Preca. Attendees chanted “no to abortion, yes to life,” and hoisted signs reading “Keep abortion out of Malta” and “Protect our children.” (In a 2021 interview, Maltese president George Vella told me that he would resign the presidency rather than sign abortion into law.)

Dr. Miriam Sciberras, chairman of the Life Network Foundation, condemned the bill in powerful terms. “The Bill in its current form would allow abortion on demand to take place in Malta,” she stated. “If the Bill becomes law, Malta will go from being the only country in Europe with full protection for the unborn child to legalising abortion. We are calling on the government to urgently change the wording of the bill to adopt the recommended changes outlined in the expert position paper by leading medics, lawyers, ethicists, and academics.”

Malta’s current laws protect the right to life of preborn children while also ensuring that mothers receive the medical care they need, resulting in zero maternal mortalities in the last 10 years. Physicians in Malta are protected by law in extraordinary cases where they act to save the life of a mother, but their actions result in the death of a preborn child. The proposed government abortion bill would, if passed, permit abortion to take place for non-life-threatening reason and, as pro-life Oxford academic Dr. Calum Miller explained in a lengthy essay, open the door to abortion on demand.

Joining the Life Network Foundation in condemnation of the government bill are 81 academics, 450 doctors, 44 institutions, the Medical Association of Malta, and the Maltese Association of Psychiatry. In an expert position paper, these Maltese leaders proposed a change to the wording of the law that would ensure it merely codifies current practice in Malta as follows:

No crime is committed under article 241(2) or article 243 when the death or bodily harm of an unborn child results from a medical intervention conducted with the aim of saving the life of the mother where there is a real and substantial risk of loss of the mother’s life from a physical illness.

The government’s wording, on the other hand, goes far beyond this, legalizing abortion in cases where medical complications “could” put her “health in serious jeopardy.” This presumably deliberate loophole would permit abortions for nearly any reason and at any gestation. As the Life Network Foundation noted in a press release:

Life Network Foundation is running a campaign called ““Inti Tista Ssalvani,” which translates as “You Can Save Me,” and Dr. Miriam Scibberas asks that pro-lifers worldwide pray for Malta.