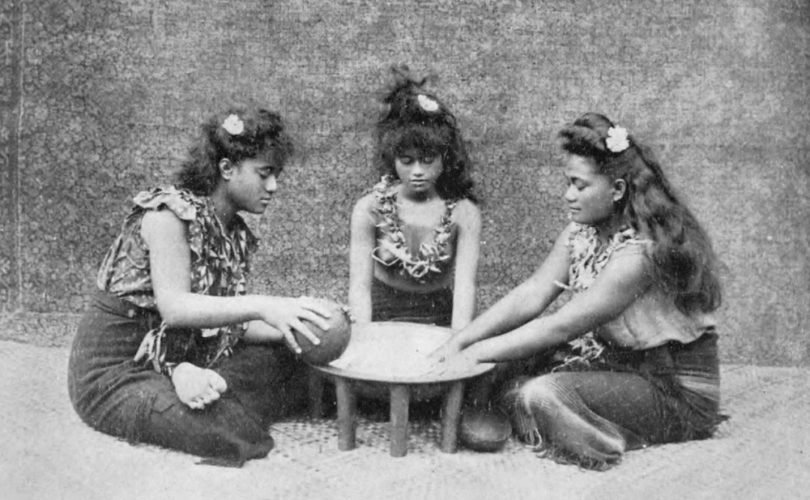 Margaret Mead was a young anthropologist who set out to help anthropology professor Frank Boas of Columbia University prove a very specific thesis: that a person’s upbringing and environment shaped a person’s actions to a greater extent than genetic factors did. Together with another young scholar named Ruth Benedict, Mead set off to research the indigenous peoples of Samoa, spending nine months there—and the result of their time there was her 1928 book Coming of Age in Samoa.

The so-called revelations in this book left many in the academic world both thunder-struck and ecstatic. Margaret Mead described an idyllic island Eden in which people lived in an almost utopian harmony, with very little competition with one another, a distinct absence of class, and, most importantly, no draconian moral codes that restricted people’s sexual behavior. Rather, teenage Samoans had many sexual partners and were encouraged to engage in this free love South Seas hook-up culture. As Margaret Mead wrote admiringly, a young Samoan girl, “thrusts virtuosity away from her. … All of her interest is expended on clandestine sexual adventures.” Christian morality and natural law, it seemed, were nothing but a hoax.

It is mind-boggling to realize when looking at the body of “scholarly work” produced by people such as Margaret Mead and Alfred Kinsey that brought about such cataclysmic changes in traditional sexual mores that most of this work was shoddy research and wishful thinking.

The impact of this book, much like the impact of the Kinsey Reports several decades later, cannot be underestimated. According to one historian (writing in Ted Byfield’s epic history of Christianity The High Tide and the Turn), “This would prove the most highly circulated anthropological book ever written. It became required reading for all first-year anthropology courses, and played a key role in shaping sex education, criminal law, government social policies, and the popular view of acceptable sexual conduct.”

Or as John Horgan put it in the Scientific American, Mead’s book “posed a challenge to Western sexual mores, which according to Mead inflicted needless suffering on young men and women. The metatheme of Coming of Age and all Mead’s subsequent work was that the way things are is not the way they must or should be; we can choose to live in ways that make us happier and healthier. Her writings helped inspire feminism, the sexual revolution, the human potential movement and other countercultural trends during the 1960s.”

It is mind-boggling to realize when looking at the body of “scholarly work” produced by people such as Margaret Mead and Alfred Kinsey that brought about such cataclysmic changes in traditional sexual mores that most of this work was shoddy research and wishful thinking. (Just as Alfred Kinsey was revealed to be a pansexual hedonist, Margaret Mead’s daughter later revealed that her thrice-married mother had many sexual relationships with women, including her fellow anthropologist Ruth Benedict. When she left for Samoa in 1926, Mead informed her husband that, “I’ll not leave you unless I find someone I love more.”) Yet academic communities, eager for any shred of “evidence” that could disprove Christianity and ensure that God was indeed, as Nietzsche declared, dead, seized onto Mead’s work as yet more proof that Judeo-Christian values were outdated at best, and damaging at worst.

Mead’s work, much like Kinsey’s, has been definitively revealed to be a hoax. Mead set off with conclusions she needed to prove, and simply found the information she needed to substantiate those conclusions, never living with one Samoan family or learning the language in her entire nine month stay. Her information on the sexual culture of the Samoans, it turns out, came almost entirely from two young girls. Mead, working on several projects at once, found herself running out of time to interview adolescent girls. So instead, she decided to befriend two of her female Samoan companions, win their trust, and then obtain from them the information on Samoan sexual culture that she needed. She did not realize that by asking the sensitive and explicit questions she was asking, she was breaching Samoan code of etiquette—and the girls responded by playfully feeding Mead precisely the type of information she wanted to hear. Mead was triumphant, feeling sure that her friendship with these girls had led her to discover the real truth about sexual customs in Samoa. The girls thought the joke they had played on the nosy Western anthropologist was quite funny. Little did they realize that their playful joke would end up informing entire fields of academic study in North America, with decidedly unfunny consequences.

When Dr. Derek Freeman decided, years later, to follow up on Mead’s research and travel to Samoa himself, he found that virtually all of her conclusions had been wrong. Samoans held to a very strict, if not puritanical, code of sexual ethics. There was no South Seas hook-up culture. He even tracked down the two girls Mead had based her analysis of Samoan sexual practices on. As Byfield puts it: “He found these individuals, by now elderly women, and reminded them of Mead’s visit. They began to giggle in embarrassment, he reported, recounting how they had told that white lady such awful lies and stories, not expecting her to believe them. They were sorry now to have so misled her, they said.”

Many in academia, seeing the foundation of so much of their worldview threatened, have savaged and personally maligned and slandered Freeman and other Mead critics. But most of them are now forced to admit that her work on the Samoans was fatally flawed. Unfortunately, our culture has already heeded the wishful thinking of Margaret Mead to such a great extent that much of the damage she has caused cannot be undone. The Sexual Revolutionaries have claimed that with the overthrow of traditional morality, we have freed ourselves to love one another better. I find it sadly ironic that they have backed these claims with the shoddy, self-serving research of people like Alfred Kinsey and Margaret Mead, who did not believe in such quaint and outmoded traditions as fidelity. As time has proven, we have made a tragic mistake by heeding their words.