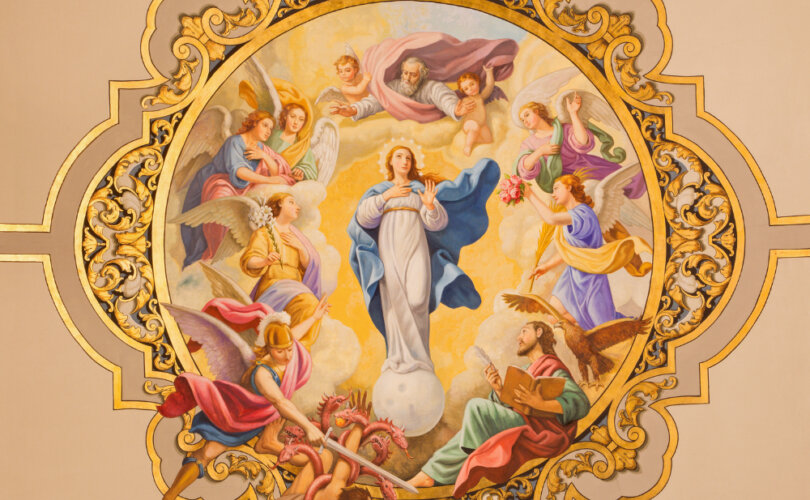 A fresco of the Blessed Virgin Mary as Immaculate Conception on the ceiling in the Basilica de la Macarena by Rafael Rodrguez from end of 19. cent. in neobaroque style. Getty Images

(LifeSiteNews) –– On this feast of the Immaculate Conception of Mary, the Catholic Church presents Her members with a wonderful opportunity in the midst of Advent to meditate upon the glorious mysteries surrounding the Blessed Virgin Mary.

In these four weeks of Advent, the Church guides Catholics in their preparation for the great coming of Christ at Christmas. But, as if to demonstrate the intimate link between Christ and His mother in every part of Christ’s salvific mission, the Church also celebrates the feast of the Immaculate Conception in the midst of this Christmas preparation.

Mary’s entire life is one of humble unison with the will of God. She constantly leads people towards her Son, ensuring that her life is a channel towards Christ. How fitting, therefore, that this great feast of the Immaculate Conception is celebrated in the weeks leading up to Christmas, affirming that Mary’s role as Mother of God and Co-Redemptrix is not to be understood separately from her Son.

‘No mind’ can ‘fully’ understand the glories of Mary

In his Apostolic Constitution Ineffabilis Deus, by which he proclaimed the dogma, Pope Pius IX outlines this fact – namely, that the Immaculate Conception of Mary is crucially linked to her role as Mother of God.

READ: ‘Mary, Did You Know?’ Of course she did; the angel called her ‘full of grace’

The Pope notes that Mary received from God an abundance of graces, far more than “all the angels and all the saints.” Such is the magnificence of Mary’s perfection, writes the Pope, that mankind cannot even properly understand!

This mother, ever absolutely free of all stain of sin, all fair and perfect, would possess that fullness of holy innocence and sanctity than which, under God, one cannot even imagine anything greater, and which, outside of God, no mind can succeed in comprehending fully.

Nor is such an abundance of graces some sort of aberration, writes Pope Pius IX. Mary’s inestimable honor as Mother of God necessitated that she be kept spotless, untainted by sin, and free from the hold of Satan. As Pope Pius notes:

Indeed it was wholly fitting that so wonderful a mother should be ever resplendent with the glory of most sublime holiness and so completely free from all taint of original sin that she would triumph utterly over the ancient serpent.

It is to Mary, continues the Pope, that God the Father gave the Son – “the Son whom, equal to the Father and begotten by him, the Father loves from his heart — and to give this Son in such a way that he would be the one and the same common Son of God the Father and of the Blessed Virgin Mary.”

It was she whom the Son himself chose to make his Mother and it was from her that the Holy Spirit willed and brought it about that he should be conceived and born from whom he himself proceeds.

Each person of the Trinity preserved Mary from sin

The great Marian saint St. Alphonsus Ligouri devoted several pages of his book The Glories of Mary to a discussion of this feast. In characteristically beautiful language, Ligouri outlines the mystery of the devotion, highlighting the intimate action of the Holy Trinity in the Immaculate Conception.

He presents the workings of each Person of the Trinity, and their particular actions and motivations of love in enacting Mary’s preservation from sin. Of particular note, is St. Alphonsus’ beautiful description of the work of God the Father:

In the first place it was becoming that the Eternal Father should preserve Mary from the stain of Original Sin, because she was His Daughter, and His first-born daughter, as she herself declares: “I came out of the mouth of the Most High, the first-born before all creatures.” [Eccl. 24: 5] For this text is applied to Mary by sacred interpreters, the holy Fathers, and by the Church on the solemnity of her Conception…This being the case, it was quite becoming that Mary should never have been the slave of Lucifer, but only and always possessed by her Creator; and this she in reality was, as we are assured by herself: “The Lord possessed me in the beginning of His ways.” [Prov. 8: 22]

Besides this, it was quite becoming that the Eternal Father should create her in His grace, since He destined her to be the repairer of the lost world, and the mediatress of peace between men and God; and, as such, she is looked upon and spoken of by the holy Fathers, and in particular by Saint John Damascene, who thus addresses her: “O Blessed Virgin, thou wast born that thou mightest minister to the salvation of the whole world.”

For this reason Saint Bernard says, “that Noah’s ark was a type of Mary; for as, by its means, men were preserved from the deluge, so are we all saved by Mary from the shipwreck of sin: but with the difference, that in the ark few were saved, and by Mary the whole human race was rescued from death.”

Church did not just make up this teaching

Contrary to many opponents of the Catholic Marian devotion, the Church did not just conjure up the dogma of the Immaculate Conception in 1854. It did not just invent some truth which hitherto had not been presented or professed by generation upon generation before then.

Rather, as Pius IX notes, his proclamation of the great dogma simply summarizes the widespread devotion and constant teaching of the Church. “These truths, so generally accepted and put into practice by the faithful, indicate how zealously the Roman Church, mother and teacher of all Churches, has continued to teach this doctrine of the Immaculate Conception of the Virgin,” he wrote.

Drawing directly from the practice of the Catholic Church through the ages, Pius IX explains that the proclamation of the great dogma is thus the natural culmination of the increasingly public devotion to Mary’s Immaculate Conception. He notes that his action is “following the procedure of our predecessors,” and that he “not only approved and accepted what had already been established,” but used thus his authority to establish the great feast of the Immaculate Conception for the entire Church.

Pius IX also notes that the Church has carefully guarded the honor of the Blessed Virgin regarding her Immaculate Conception. Previous Popes have “denounced as false and absolutely foreign to the mind of the Church the opinion of those who held and affirmed that it was not the conception of the Virgin but her sanctification that was honored by the Church.”

READ: Mary promises graces for those who do this on the Solemnity of the Immaculate Conception

Praising these actions of his predecessors, Pius IX observed that earlier Popes did not tolerate attempts to formulate arguments against the Immaculate Conception.

Concerning the most Blessed Virgin Mary, Mother of God, ancient indeed is that devotion of the faithful based on the belief that her soul, in the first instant of its creation and in the first instant of the soul’s infusion into the body, was, by a special grace and privilege of God, in view of the merits of Jesus Christ, her Son and the Redeemer of the human race, preserved free from all stain of original sin. And in this sense have the faithful ever solemnized and celebrated the Feast of the Conception.

READ: The Feast of the Most Holy Name of Mary reminds us why she is the most powerful intercessor for mankind

Closing his proclamation, Pope Pius IX urges Catholics to renew this devotion in light of his 1854 proclamation.

With a still more ardent zeal for piety, religion and love, let them [Catholics] continue to venerate, invoke and pray to the most Blessed Virgin Mary, Mother of God, conceived without original sin. Let them fly with utter confidence to this most sweet Mother of mercy and grace in all dangers, difficulties, needs, doubts and fears. Under her guidance, under her patronage, under her kindness and protection, nothing is to be feared; nothing is hopeless.

Michael Haynes is a Vatican correspondent writing for LifeSiteNews. Originally from Cheshire, England, he is a graduate of Thomas More College in New Hampshire. Since childhood he has been very involved in pro-life activity and defending the Catholic faith through public campaigns.

Michael writes on materdolorosa.co.uk, and has authored works on Mariology (Mary the Motherly Co-Redemptrix), Catholic spirituality, and most recently published an apologetic work “A Catechism of Errors.” He occasionally writes for Catholic Family News and for the American TFP. His great love is the Traditional Latin Mass. You can follow Michael on Twitter.