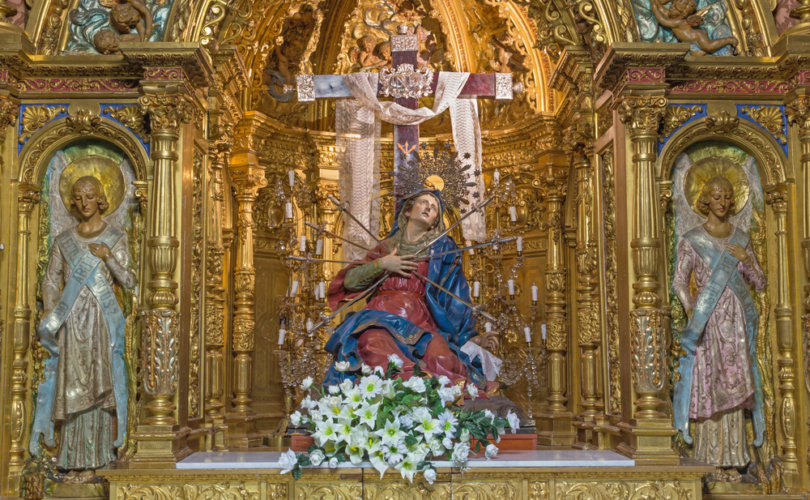 (LifeSiteNews) – As the hours pass on Good Friday afternoon, Christ’s painful journey to Calvary is complete. Nailed upon the cross, he looks down at the Woman, His mother, and in a penultimate act of His redemptive death He gives her to the Church, and the Church to Her. St. John writes: “When Jesus therefore had seen his mother and the disciple standing whom he loved, he saith to his mother: Woman, behold thy son.”

This act is not merely symbolic, as some – in an attempt to downplay the role of Mary – would have us believe. The Mother of God is not an ‘extra’ or a mere passer-by watching this bloody crucifixion.

She is an essential ‘character’ in the most profound drama that the world has ever seen. Indeed, this is the culmination of her role as Co-Redemptrix; a role that she assumed at the Annunciation when she uttered her fiat to the angel Gabriel; a role that is so completely intertwined with her role as Mother of God.

Mary is intimately united with Christ’s work of Redemption

At the moment of her Annunciation, the Fathers and theologians teach that Mary was aware of the sorrow and utmost pain that she was to endure. She was aware of the intimate role that she would play in accompanying Her Son in His redemptive suffering and death. To all this, she then said yes, not merely passively accepting, but actively willing all that God willed for her and her Divine Son.

From the instant of the Annunciation, her life became one devoted to the workings of the salvation, not motivated by visions of self-glory, but by acts of sacrificial love.

St. Alphonsus Ligouri portrays the meeting between the two on the road to Calvary in his Glories of Mary:

“At length they looked at each other. The Son wiped from his eyes the clotted blood, which, as it was revealed to St. Bridget, prevented Him from seeing, and looked at His Mother; and the Mother looked at her Son. Ah, looks of bitter grief, which as so many arrows, pierced through and through those two beautiful and loving souls.”

Now, standing resolutely beside the cross on Calvary, Mary unites herself with Christ as the final moments of the Passion drag out. Tradition teaches also that Mary was not overcome with grief so as to allow herself to swoon or faint, as some of the romantics have portrayed in art. Rather, she emptied herself of any consolation, filling herself with the pain of uniting herself consciously, wholeheartedly, and completely with Christ, in every moment of His Passion.

St. Bernard expounds on the depths of sorrow endured by the Mother who would not allow herself to abandon her Son, even though her presence caused them both the utmost sorrow. “Near the cross of Christ His Mother stood half-dead; she spoke not; dying she lived, and living she died; nor could she for death was her very life.”

St. Bernard also writes beautifully in his sermon for the Assumption, referring to the depth of sorrow that the Blessed Virgin endured with Christ:

“One can well say, indeed, that a sword pierced your heart, o blessed Mother, for it was only through your heart that it could penetrate the flesh of your Son … His pain, like a violent sword, has thus passed through your heart, and we can call you, with reason, more than a martyr, since in you the sense of compassion has prevailed so strongly over that passion endured by the body.”

Indeed, the life of Mary cannot be understood without this reference to the cross. It was precisely for this salvific action that Christ came upon the earth, to pay the price for man’s sin, and Mary joins Him in this, as she does in every part of His life.

Mary’s ability to unite herself so completely with the will of God and endure the Passion and death of her Son alongside Him stems from the unfathomable love that she has for God, and the insatiable desire she has to draw souls to Him. She, as St. Bernardine writes, sacrificed herself at the same time that her Son sacrificed Himself.

Co-redemption is linked to Mary’s motherhood

Mary’s cooperation in Redemption stems from, and is a necessary part, of her Divine motherhood. The French 20th century Mariologist, Fr. Emil Neubert, teaches that “Mary’s co-operation in our salvation gives a special orientation to our cult of her. Without that co-operation, Mary would not be truly, or at least not completely, a mother.”

It would be absurd and profoundly wrong to think that Mary could give her fiat to being the Mother of God, and yet not also give her simultaneous fiat to being the Co-Redemptrix. Mariologists teach that “Mary did not co-operate in the Redemption any less knowingly or less really than she did in the Incarnation.”

Just as Mother and Redeemer are intimately linked throughout Christ’s life, Mary cannot be understood only as a Mother separated from Co-Redemptrix.

This profound link, between Co-Redemption and her Maternity, is seen of course in Christ’s words from the cross, recounted by St. John: “Woman, behold thy son. After that, he saith to the disciple: Behold thy mother.” At this culmination of the Redemption, Christ clearly shows His Church that Mary is both Co-Redemptrix and Mother.

The two cannot be separated. As Fr. Neubert teaches:

“His words did not create this motherhood, but proclaimed and confirmed it at the most solemn moment of His life, at the very moment that this motherhood was being consummated by the consummation of the mystery of the Redemption, and at the moment when Mary was best prepared to understand the fullness of its significance.”

St. Alphonsus recounts the words Christ uttered to St. Bridget regarding Mary, employing the common term of “compassion” to refer to Mary’s co-redemptive suffering alongside Christ. “My Mother Mary, on account of her compassion and love, was made the Mother of all in heaven and on earth.”

Indeed, Mary’s suffering at the foot of the cross is born out of the very nature of her maternity, as she stands underneath her Son, uniting herself in His passion and death, for the salvation of souls. The long-standing teaching of the saints and theologians thus teaches that to know Mary as Mother, one must also come to know and lover her as Co-Redemptrix, since the two roles cannot be separated.

St. Alphonsus presents a final meditation on the death of Christ toward the close of the Glories of Mary:

“I beseech thee, by the agony which thou, my most loving Mother, didst endure together with thy dying Son and by the sadness which thou didst feel, when for the last time, He spoke to thee from the cross and bade thee farewell and left all of us in the person of St. John, to thee as thy children; by that constancy with which thou didst then see Him bow down His head and expire, I beseech thee to obtain me the grace, from thy crucified Love, to live and die crucified to all earthly things.”

Michael Haynes is a Vatican correspondent writing for LifeSiteNews. Originally from Cheshire, England, he is a graduate of Thomas More College in New Hampshire. Since childhood he has been very involved in pro-life activity and defending the Catholic faith through public campaigns. Michael writes on materdolorosa.co.uk, and has authored works on Mariology (Mary the Motherly Co-Redemptrix), Catholic spirituality, and most recently published an apologetic work “A Catechism of Errors.” He occasionally writes for Catholic Family News and for the American TFP. His great love is the Traditional Latin Mass. You can follow Michael on Twitter.