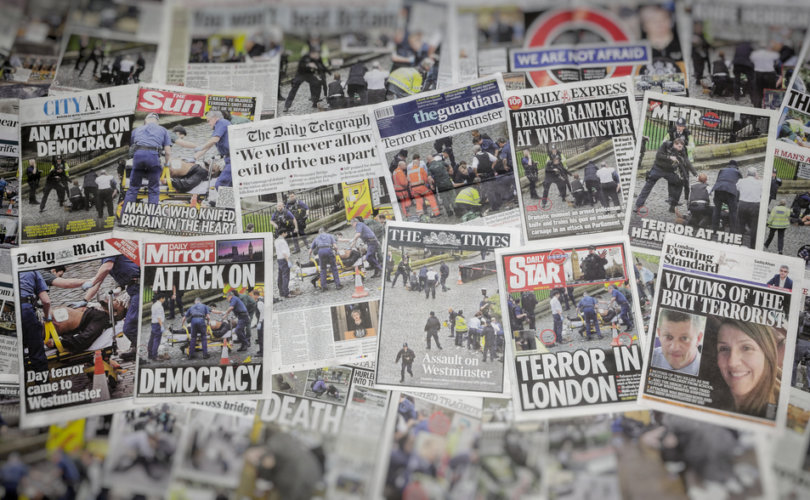 May 23, 2017 (Catholic Insight) – ISIS has struck again, in the heart of Britain, as a suicide bomber detonated a “sophisticated” device as young concertgoers were leaving an Ariana Grande concert in Manchester. At least 22 have been killed, and dozens more injured. Details are still emerging, and in the meantime we must pray for the victims, for the eternal rest of those who have died, for healing for those who survived, and that God may have mercy on the perpetrators of this heinous deed.

In yesterday’s Gospel, for Monday of this sixth week of Easter, Christ prophesied that “indeed the hour is coming when whoever kills you will think he is offering service to God,” the very claim made by the Islamic terrorist(s) who carry out such brutalities. In the original Greek, the word for service is ‘latria,’ which means adoration, worship, reserved for God alone. In their conscience, such as it is, these terrorists see themselves as purifying the corruption of an ‘infidel’ culture, and paving the way for the universal acceptance of Islam, in their view the one and only true religion, according to which they are considered ‘martyrs,’ in a tragic and ironic inversion of that venerable title.

Yes, we must respond, and this is a ‘war’ of sorts, the first principle of which, as Sun Tzu says, is ‘know thy enemy.’ One aspect of that, in turn, is seeing ourselves as our enemies might see us. I must confess that I had never heard of Ariana Grande until this morning. In the photo on her Wikipedia page, the 23-year-old singer is dressed in what looks like a naughty nightie, something you would buy in the back of Victoria’s Secret. Not exactly a role model one might choose for young women and girls in our already sex-saturated culture. There is a method to the madness of ISIS, and they choose their targets with aforethought. To such ‘men’ who have their women dress, if dress is the right word, in what amount to full-body shrouds, one can see how someone like Grande and her troops of teenage imitators would make them froth and foam at the mouth.

Ah, yes, the clash of cultures, which our politicians and their followers, which includes most people, just do not get. At the heart of any society is its religion, whether that religion be supernatural or not, what God or gods they worship, what founds their laws and customs, where they put their time and energy, how they raise their children and govern their families, towns, societies. Islam has a very different idea of how all of this is to be done than what was once the Christian land of ‘Britain,’ but the hollowness of an increasingly agnostic and apathetic British culture, along with the rest of the West, is weak and prone against the onslaught of a resurgent Islam.

When these tragedies strike at the heart of our own culture (they happen far more regularly in Muslim lands but do not receive anywhere near the news coverage, if covered at all), I wonder why? Not in the sense of why Islam spreads its religion and gains converts by violence, for that has been the case since its founding by Mohammed, but, rather, that Islam has already, in a deep and real sense, won the war, without the necessity of such violence. President Trump, in his own response, called the perpetrators ‘evil losers.’ Yes, but they see themselves as good, even noble, and as far as losers go, not in their own eyes and according to their own ‘game.’ Blowing themselves up and taking any number of infidels along with them (none of whom they see as ‘innocent,’ regardless of age, sex or status) ensures them a paradise of unending sensual delights. Of course, they will find out the hard way that this is not the case, as they now stand before the judgment seat of Christ, but that does not change how they will act here and now.

Furthermore, sheer demographic numbers, by births and immigration, ensure that Britain, along with many other European countries, will be more or less Islamic enclaves within a generation or two, and under such a regime, there will not be many, if any, concerts like Ariana Grande’s. I suppose the a priori violence signifies some level of impatience, so that they might hurry things along, or frustration, or just to prove who’s really in charge. As ISIS has already implied by their social media response, there is more of this to come.

No one knows how many potential terrorists there are in Britain, which has over 3 million Muslims, with more or less untrammeled immigration still continuing. Most of these are law-abiding citizens, one may presume, but some, even if it be a small number, are not only prone to such mayhem but actively planning further bloodshed, and it does not take many to bring a numerically more dominant culture to its knees.

Yes, we must resist, and do what we can by police and military intervention, but how do you stop people who are willing to kill and die in the process, seeing this is a glorious ‘worship offered to God’? How many police officers, gates, cameras, barriers, security? Do we hole up in reinforced walled communities, fearful to go out the door? To face such an enemy requires primarily a resistance that is cultural, which ultimately means religious, something we have by and large lost.

As we reflect and pray, Brits and all the rest of us have a lot of soul searching to do, to ask who we are, what it really means to be ‘British,’ or ‘Canadian’ or ‘American.’  For if we know not who we are, how can we know who is the enemy?

Reprinted with permission from Catholic Insight.

John Paul Meenan is Assistant Professor of Theology and Natural Science at Our Lady Seat of Wisdom for Studies in the Liberal Arts. He writes regularly, and edits Catholic Insight online magazine.