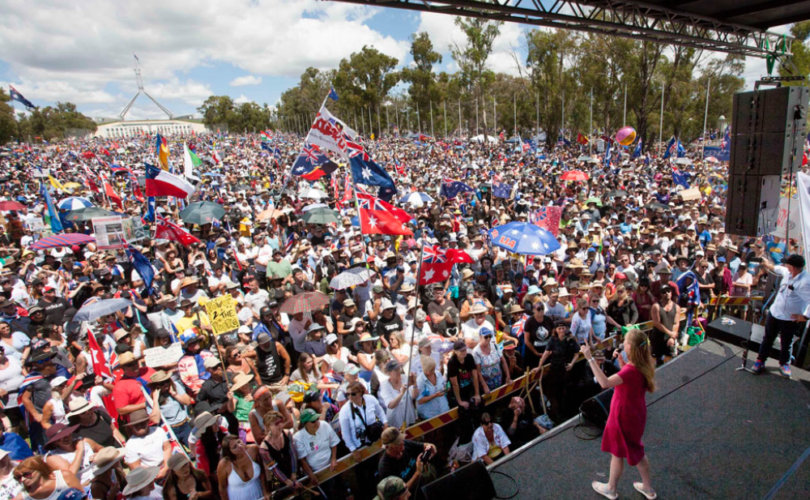 CANBERRA (LifeSiteNews) — On Saturday Australia’s capital city Canberra witnessed perhaps the largest political demonstration in the nation’s history. People came from all parts of the country to participate in the Canberra Convoy to protest against vaccine mandates and government oppression.

It was a day that made me very proud and thankful to be an Australian – and on the right side of history. It was extremely inspiring for me to see such a happy and hopeful crowd determined to get their rights back. It also is clear we are not just fighting for our rights; we are also celebrating our freedoms, the ones God gave us.

For two years, we have been tirelessly fighting for our basic human rights while experiencing the heavy hand of police and government tyranny. People have lost their jobs, been alienated from their friends and families, been assaulted, defamed, and even spat on. In Canberra on Saturday, it felt like a Christmas party where we could celebrate all our hard work. It’s far from over, but in that moment, there was a sense of accomplishment and unity that cannot be explained in words.

Most of us never imagined that we would be subjected to such a systematic and sustained attack on our democracy. This was an opportunity to celebrate our freedom and unity unashamedly. The true Australian soul was on display, ordinary people rising up against dictatorial leaders, so-called public servants, a completely corrupted media, a feckless medical fraternity, a failed judiciary and a co-opted scientific community.

The numbers at the Convoy were huge, perhaps more than double the population of Canberra and representing over 6 per cent of the total voting population. That was just the people who made the long journey to get there. There is a growing desire amongst Australians from all walks of life to get their rights and democratic freedoms back.

The disgraceful Australian media performed its now familiar job of lying and distorting. Newspaper reports said that there were only 10-20,000 people there; one outlet even said only 4,000. A glance at the aerial shots indicates how dishonest that is.

Great effort was made to exaggerate any conflict with police, which was all but non-existent. Asinine stories about dissension amongst members of the Convoy were confected to try to demonize the ordinary Australians protesting.

In another twist, one mainstream newspaper ran a story on Sunday, the day after, about a person who allegedly had left the ‘cult’ of the freedom movement, specifically naming me and my organization. This was a clever inversion of the truth. It is the people who have been hypnotized by the governments into believing that it is necessary to take away their medical freedoms who are in the cult.

It is they who are suffering from the mass formation psychosis. That the journalists were so devious as to turn what is happening upside down by accusing the freedom movement of the very thing they are guilty of shows the extent to which the media will go to push the Big Pharma, big government line. There will be no going back for those journalists when the truth inevitably comes out, as it will.

Asked about the Convoy, Prime Minister Scott Morrison continued to speak out of both sides of his mouth. He washed his hands of the whole thing, deceptively claiming that the Federal government was against mandates except for some workers in high-risk areas and putting all the blame on the State governments.

It was a massive abrogation of responsibility from a leader who does not have the courage to lead. As Craig Kelly, head of the United Australia Party, pointed out, the Federal government could easily have passed a bill against vaccine mandates but chose to oppose one. History will not judge these moral failures well.

Australia has never seen anything like this in its political history. The sense of community – and relief that others share the same view – in the freedom movement will not fade away. In fact, it is growing stronger. This has come as a shock to the despots in Australia, who no doubt imagined that Australians, who tend to be laid back and relaxed, would get sick of protesting and return to meekly obeying their masters.

They were wrong. The movement is growing, and it has a heart – stemming from a commitment to the simple truth and the need to be afforded the most basic of human rights – that has never been seen in Australian politics. Many attendees believe this is our last chance to rescue the country. They are surely right.

I have complete faith in the Australian freedom family to do whatever it takes to take our beautiful country back and ensure a free future for our children and grandchildren. We are determined, focused, strong, and passionate. No one can stop the momentum we have built over the last two years. Like the Canadian truckers who have inspired freedom movements around the world, we will not stop until we get our freedoms restored.

I would like to take this opportunity to thank the Canadian truckers for starting this movement and inspiring the whole world to stand up taller than ever before. Your leadership will do down in history as a turning point for the global pushback against the new world order.