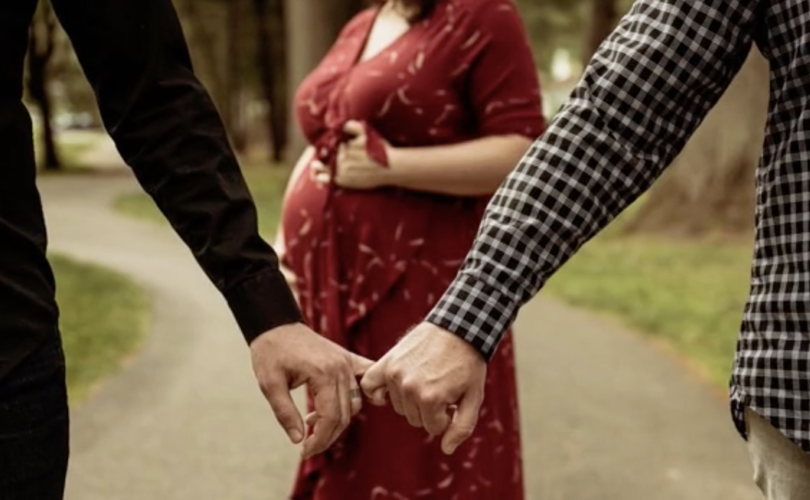 (LifeSiteNews) — A series of photos posted recently on TikTok shows a homosexual couple gazing into each other’s eyes while a very pregnant woman, presumably the surrogate they contracted to carry the child of one of the men, stood far behind them in the background.

“We did a ‘maternity’ shoot and it came out great!” wrote Portia Zwicker, surrogate outreach coordinator at the New York Surrogacy Center.

As of this writing, the series of photos has been viewed well over 4 million times.

However, make no mistake: This is not a “maternity” shoot; it is a “misogyny” shoot.

These photos depict the summit, the pinnacle of misogyny.

The photo shoot celebrates the triumph of two homosexual men who had the financial resources to obtain a child through the purchase of an egg, in vitro fertilization, and then the rental of a stranger’s womb for nine months.

Rivka Edelman, a college professor raised by two lesbian mothers, noted in a 2014 English Manif commentary that children of gays are “denied one parent so that men could prove that two men can play at baby-making” and they often require two women to do it.

“Well, that dog doesn’t hunt. I grew up in a gay household and I know the arguments better than I know the pledge of allegiance,” Edelman declared. “So save it. All of it – the missives, the threats. Don’t prove my point to people about loving the gay community. They will turn and tear their own to shreds in a heartbeat. Because the fragile narrative has to be protected at all costs. Family is a photo op. And children are props.”

While the surrogate mother is included in these photographs, she will no doubt be erased from family photo albums after the child’s birth.

The lucrative surrogacy industry has allowed gay couples and individuals to treat women as a class of slaves — “breeders” — and the children born for them as chattel.

Numerous people commenting on social media noted that, dressed in red and standing in the distance, the surrogate looked like a character from The Handmaid’s Tale.

“The woman doing the actual work takes a backseat so we can call the gay guys brave and beautiful,” Twitter user Seph Pelech wrote.

“Don’t forget they used a woman for her eggs too who doesn’t even get a mention,” cautioned Jennifer Lahl, founder and president of The Center for Bioethics and Culture Network.  “Gestational Surrogacy means TWO women used and exploited.”

Lahl was one of the first to sound the alarm about how surrogacy abuses women when she produced the documentary film Breeders: A  Subclass of Women?

They constantly push gay couples and singles —and since they boast of working with “countless Intended Parents from all walks of life,” thruples as well — to buy what they’re selling.

“Did you know that you don’t have to have a partner to become a parent through surrogacy?” asks one of their many ads.

“Our team of experts work with countless Intended Parents from all walks of life, with different experiences and circumstances,” it continues.

“We can’t wait to speak with you soon!”

Did you know that you don’t have to have a partner to become a parent through surrogacy? 😊

Our team of experts work with countless Intended Parents from all walks of life, with different experiences and circumstances.

“We want to share with all of you wonderful news!” begins a March 21 posting, showing presumably a single man with three newborns.

“Our colleague … has just become a father,” the posting continues. “These three healthy babies were born in Colombia and the new father is over the moon.”

We want to share with all of you a wonderful news!
Our colleague, #Tammuz Family case manager – David Sollen, has just become father ❤️🎈
These three healthy babies were born in Colombia and the new father is over the moon 🥰✨ Here they are, Alba, Levi & Luca ❤️ pic.twitter.com/X1n6EhVdkI

More than three months later, the Twitter posting hasn’t received a single “Like.” I guess the general public isn’t as excited about this news as is this surrogacy agency.