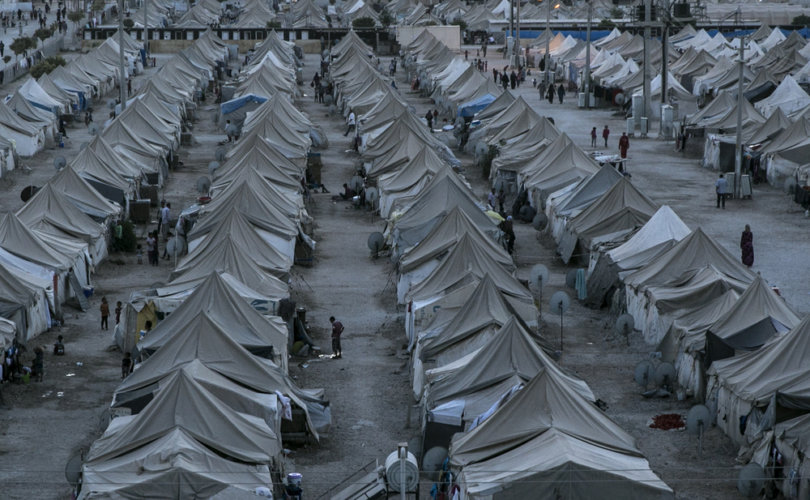 It is absolutely essential that we do not utilize genuine problems like the Syrian migrant crisis as a scapegoat for European angst and miss entirely the real problem. (PHOTO: Akcakale Refugee Camp)Shutterstock

May 15, 2017 (LifeSiteNews) – Across the right-wing Twittersphere and on alt-right and even a few traditionalist blogs, one phrase has become common: White Genocide. The meaning is simple, although less dramatic than the name would seem to indicate. The claim is that the governments of Western nations are deliberately moving millions of non-white immigrants into their countries, and that policies of multiculturalism force white people to the fringe, ensuring that they will eventually acquire minority status in countries they once dominated.

Like so much of grievance politics, the #whitegenocide crowd misses something essential: the upcoming minority status of white Westerners in some Western countries has nothing to do with a conspiracy, unless we’re going to revisit the history of the Sexual Revolution. If European culture is dying, it is dying by suicide, not crumbling in the face of an immigrant invasion.

Just look, for example, at birthrates across the West. With the possible exception of the United States, white Westerners are not replacing their populations. Italy is now attempting to insert information on having children into sex education courses. In 2015, the average age of inhabitants in the United Kingdom passed the age of forty. For the first time since Confederation in 1867, there are more seniors than children in Canada. In Germany, over 30% of women are childless. From Scandinavia to the Lowlands, from the Spanish coast to the Caucuses, birthrates are plunging—and white Europeans are abandoning the future of their culture by voluntarily deciding to discontinue it.

The problem goes all the way to the top: Europe’s most important leaders are all childless. As Giulio Meotti put it, “Being a mother or a father…means that you have a very real stake in the future of the country you lead. Europe’s most important leaders leave no children behind.” Included in the list is German Chancellor Angela Merkel, Dutch Prime Minister Mark Rutte, the new French leader Emmanuel Macron, Swedish Prime Minister Stefan Löfven, Luxembourg’s Prime Minister Xavier Bettel and Scottish First Minister Nicola Sturgeon. One stark statistic highlights how successful the Sexual Revolution’s introduction of contraception and abortion really were: A quarter of European women who were born in the 1970s are childless.

As the result of a nearly collective European refusal to reproduce, huge numbers of immigrants from other places around the world have entered to ostensibly make up the missing labor force. It is important to remember that the Syrian migrant crisis was not the catalyst for this discussion: Mark Steyn highlighted skyrocketing rates of Islamic immigration in his book America Alone over a decade ago, and pointed out that Islamic terrorists who wished to conquer Europe only needed to wait for demographics to do the job for them—why blow up buildings owned by people who had no children to leave them to, in the first place?

Of course, the tension between immigrants from cultures that still believe in things and post-Christian and post-modern Europeans who believe in a castrated tolerance—some Dutch men responded to news that European women were getting sexually assaulted by migrants by donning miniskirts and hosting a parade in solidarity—is only going to increase. Europeans, for the most part, exist in a spiritual vacuum and do not possess a worldview robust enough to respond to those entering their nations. This has resulted in an angst that is fueling the alt-right, and contributing to the popularity of Geert Wilders in the Netherlands and Marine Le Pen in France.

But as we attempt to identify the problem, it is absolutely essential that we do not make the mistake of utilizing genuine problems like the Syrian migrant crisis as a scapegoat for European angst and miss entirely the real problem: Europeans decided to abandon their heritage and stop having children. Syrian migrants didn’t cause the 30% rate of childlessness among German women, regardless of Merkel’s stupidity. Moroccans didn’t demand that Dutch women reject the idea of having a family. Immigrants didn’t create the population vacuum across Europe that they took advantage of: Europeans did that themselves.

The reason it is so important to point this out is that if we do not correctly identify the problem, we will end up with the wrong solution. Playing the victim is not the solution here, and is ridiculous to boot: European culture was not wrested from the hands of those desperately clinging to it. Culture must be given up voluntarily. I’m a Canadian of Dutch heritage—both my maternal and my paternal grandparents immigrated here—and yet, much of Dutch culture has been preserved in our families. Many still speak Dutch, attend a Dutch Reformed Church, are familiar with Dutch history, and consider themselves to be Dutch-Canadian. I own a pair of wooden shoes modeled after the pair my Opa still wore here in Canada, and have a framed 1675 engraving of Dutch admiral Michael de Ruyter hanging in my foyer. But that’s because Dutch culture was passed on.

No one forced Europeans to leave their great cathedrals empty and silent but for the occasional echo of a tourist’s camera clicking. No one ordered Dutch parents across the Netherlands to leave their pews vacant, or fail to even tell their children what the Canons of Dordt are. No one demanded that the French pretend that their history was a long march towards secularism. No one shuttered the little country churches of the Church of England and ordered the Common Book of Prayer burned. No, the churches were abandoned. Faith was abandoned. The sacred was abandoned. Tradition itself was abandoned.

It is true that some Europeans may be looking around and coming to the conclusion that their parents and grandparents gave up too much. It is the upcoming generation, of course, that must live with the suicidal decisions that resulted in the obliteration of European heritage and culture in the first place. But it must be said that many young men and women are rootless cosmopolitans more loyal to the Eurocrats in Brussels that assist in the maintenance of a system that enables their lifestyle than they are to any nation state, or values system, or culture, or heritage. If only young people had voted, Brexit wouldn’t have happened.

During the recent Munk Debate between Niall Ferguson and Fareed Zakaria on the question, “Is the International Liberal Order Over?” these things got mostly ignored. Zakaria tried to portray the forces that fueled Trump and Brexit as a mere blip on the road to secular utopia, and Ferguson tried to explain that this Order had not been good for a lot of people who might reject a system that seemed to perpetually exclude them. But as I noted in my debate review, it is essential that we start to talk about what made Europe great in the first place: the Judeo-Christian values that founded it. If we do not realize what created European culture, we will begin to return to the gods of blood and soil—and there are still those who remember what happened the last time they were with us.