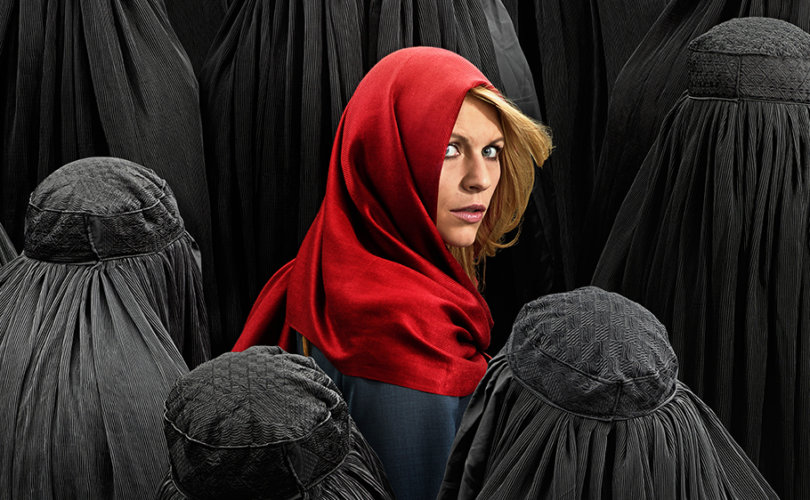 May 8, 2017 (LifeSiteNews) – For years everybody’s been talking about the TV show Homeland, mostly in glowing terms. Sure, there’s been some controversy about how the show treats some of the thornier issues of foreign policy and religious-based extremism. But Homeland is pretty much universally acknowledged as one of the best and most popular TV dramas available.

So, a couple Fridays ago, I decided to give it a try.

The first episode started out intriguingly enough. But then, a few minutes in, without any warning whatsoever, there were two naked people on the screen having sex.

The scene was extremely graphic, showing everything but for genitals. As mentioned, there was absolutely no leadup. The camera simply cut right into the middle of the scene, leaving me scrambling for the fast-forward button.

Everybody, it seems, has decided to play a game together, wherein we all pretend that viewing naked people simulating sexual intercourse on camera is as neutral an activity as watching the sun rise or contemplating the lotus flower.

Surprised at the explicitness of the scene, and how soon into the first episode it occurred, I looked up the “parents’ guide” for Homeland on IMDb. Turns out that similar scenes are routine, with roughly one sex scene or instance of nudity per every episode and a half.

In recent years, HBO has gained a reputation (and a lot of free press) for creating shows that deliberately push the boundaries of what’s acceptable in terms of graphic nudity and violence (Game of Thrones, Westworld, etc). If it’s an HBO show, you basically expect it at this point. Which is why I don’t watch them.

Homeland, however, is not an HBO show. While broadcast on premium cable, it’s comparatively mainstream, produced by Fox 21 Television Studios, and airing on Showtime. It’s also available for streaming on Netflix in Canada – which is where I was watching it.

I didn’t expect the graphic sexuality. Nobody has ever mentioned it, and I’ve never run across any articles warning about it. Depressingly, this isn't surprising. We are now at a point where the occurrence of graphic sexuality in mainstream TV shows and movies is so ubiquitous that it no longer merits comment, let alone outrage or controversy.

These days, as long as the sex scene is vaguely germane to the story line, it is defended as “artistic,” and to question its appropriateness is to invite inevitable accusations of prudishness.

Everybody, it seems, has decided to play a game together, wherein we all pretend that viewing naked people simulating sexual intercourse on camera is as neutral an activity as watching the sun rise or contemplating the lotus flower.

If, on the other hand, you violate the rules of this game by confessing your unease, then the game dictates that everybody contemptuously dismiss your concerns with the barely concealed suggestion that your unease reveals a troubling lack of self-control and possible latent psychopathic sexual tendencies. After all, goes the game, if you can’t watch people having sex with the coolly impassive objectivity of a seasoned gynecologist performing an annual exam, you’re definitely not a well-adjusted, mature adult, and quite possibly a latent sex fiend.

Denying self-evident facts about human nature has become a bit of a cottage industry of late. And so I suppose that if people can successfully pretend that there's no intrinsic difference between boys and girls, they can also fool themselves into thinking that video footage of people having sex isn't an extremely powerful stimulus that, in the case of any healthy adult, involuntarily leads to certain predictable, potent and morally fraught responses in the person watching it.

I'm just going to go out on a limb here, and suggest that maybe, just maybe, watching this kind of stuff isn't a good idea for anybody who takes seriously the call to live a life of virtue. I know, Jesus never did say, “Thou shalt not watch hardcore sex scenes on TV,” but I'm guessing He took it for granted.

It’s astonishing to think that a generation ago, even to suggest that married couples were sleeping in a common bed on TV was to invite the wrath of the censorship boards. Maybe that was an unreasonable extreme. But I’m pretty sure that the far more unreasonable extreme is to fill our movies and TV shows with graphic nudity, and then demand that everyone pretend that this is normal.

This past week, a production of a play put on by the Boston Children’s Theatre was cancelled in the final days of its run due to the fact that the director had included a scene of full-frontal male nudity…in a children’s play. Do that on the street, get arrested for indecent exposure (Unless, I suppose, you’re marching in a gay pride parade…but that’s another story for another day). Include it in a play, and it’s “art.”

That’s not normal. We should stop pretending it is.