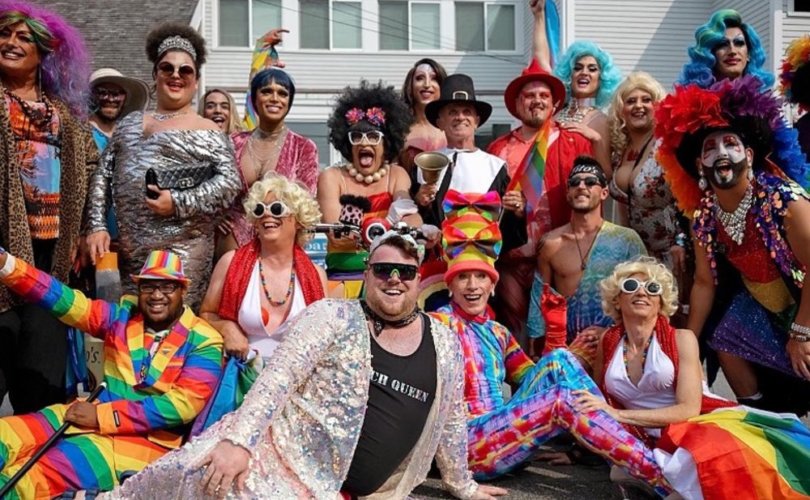 PROVINCETOWN, Massachusetts (LifeSiteNews) – The Centers for Disease Control (CDC) spawned panic this week when it revealed that during the first half of July there had been a large spike in COVID-19 cases emanating from a quaint seaside tourist destination, where 74% of the infected were fully vaccinated persons.

Why did an outbreak occur in this little village at the tip of Cape Cod and not in any of the thousands of other resorts lining the coasts of the U.S. or in any other party venue, urban or rural?

What the CDC fails to mention in its reporting, and what the mainstream media want you to overlook, is how different Provincetown is from most every other beach community.

Provincetown is America’s summer LGBT vacation mecca, and during the two-week period spanning from July 3 to July 17 when cases spiked, tens of thousands of gay men had jammed the resort.

The CDC, national news media, and the White House are all ignoring the obvious in order to trigger a new mask mandate and other stringent lockdown measures: This isn’t about insufficient masking or lockdowns. It’s about what happens when thousands of men converge to engage in casual sodomy.

Those who came down with COVID-19 reported “attending densely packed indoor and outdoor events at venues that included bars, restaurants, guest houses, and rental homes,” noted the CDC report, which stops far short of questioning the role that casual, often anonymous sex between males or groups of males might have played in transmitting the dreaded virus.

NOTE: Which is more likely to facilitate the transmission of COVID-19: Maskless people crowded together for the Fourth of July – or thousands of homosexual encounters with strangers and acquaintances?

At the conclusion to its alarming report, the CDC hints at, but never gets around to telling the truth: “Demographics of cases likely reflect those of attendees at the public gatherings, as events were marketed to adult male participants; further study is underway to identify other population characteristics among cases, such as additional demographic characteristics and underlying health conditions including immunocompromising conditions.”

NOTE: The CDC assiduously avoided using the terms homosexual, gay, or men who have sex with men, and instead employed ambiguous terminology, ignoring the obvious. Why?

NOTE: Here’s a simpler takeaway for the Biden Administration: Large public gatherings where sexual abandon is practiced should be discouraged.

“What this tells us is we need much more context and better data to guide whether and when vaccinated people should wear masks, because following CDC’s new guidance wouldn’t have stopped this outbreak from occurring,” Jennifer Nuzzo, an epidemiologist with the Johns Hopkins Bloomberg School of Public Health, told The Washington Post.

NOTE: Ms. Nuzzo is half correct: “CDC’s new guidance wouldn’t have stopped this outbreak from occurring” because it does not advise adult males to avoid sexual encounters where an exchange of bodily fluids and exposure to fecal matter is involved.

That is the “context” you claim to be missing, Ms. Nuzzo.

“There’s no one person or spot to blame here,” said Daniel Park, group leader for viral computational genomics at the Broad Institute, according to the Post.

NOTE: Of the tens or hundreds of thousands of Fourth of July celebrations around the country, and thousands of resort areas along U.S. shorelines and in our mountains, there was only one ground zero for a July COVID-19 outbreak: Provincetown.

“Doing away with mask requirements was a ‘mistake’ in the first place,” said Debbie Nadolney, director and curator at the AMP Gallery in Provincetown, “and she hopes other parts of the country learn from the town’s experience and require masks in addition to pushing for more vaccinations.”

NOTE: Maybe putting aside sexual inhibitions, not masks, was the real culprit.

NOTE: Running an establishment where sodomy is a regular occurrence doesn’t exactly reflect seriousness about health.

The Times described Provincetown as “a quirky beach community at the tip of Cape Cod,” a community of “health-conscious, left-leaning Northeasterners, known as a vacation mecca for gay men,” with “one of the highest vaccination rates in the country, upward of 95 percent among permanent residents.”

NOTE: “Gay” is a euphemism, shielding a darker truth that has been successfully obscured: The “left-leaning Northeasterners” who gravitate to Provincetown are men who engage in sodomy.

“On the weekend of July 4 … Around 60,000 people had jammed into a narrow spit of land, where many congregated, maskless, on sweaty dance floors and at house parties,” continued the Times report.

The CDC is afraid to identify the “demographic characteristics” of the “adult male participants” who packed Provincetown in early July. Rather than immediately recommending curtailing non-monogamous sexual activity to this small segment of the population, the CDC has quickly diverted the nation’s attention to masking, posturing the organization for the re-weaponization of face mask mandates against the entire American population.

Mainstream media outlets express no curiosity about the CDC’s omission, nor do they address the peculiarity of what goes on in Provincetown.