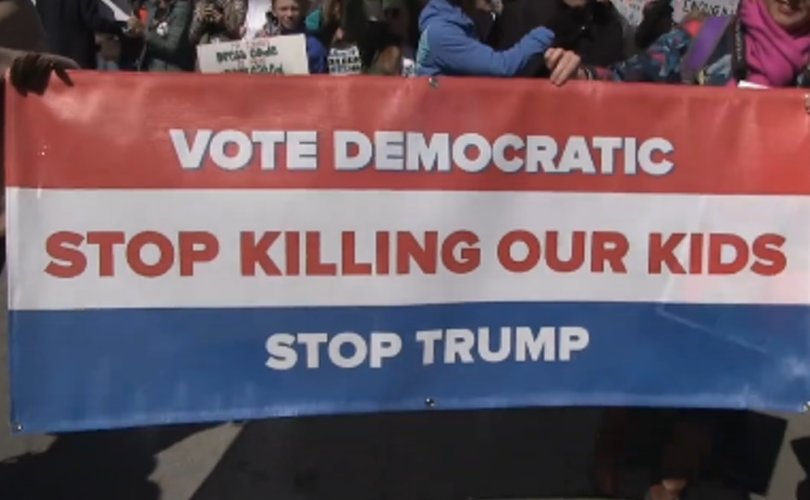 WASHINGTON, DC, March 26, 2018 (LifeSiteNews) – This weekend saw the “March for Our Lives,” in which scores of teenagers (organized by a who's-who of left-wing groups, including Planned Parenthood and MoveOn.org) descended on Washington, DC to demand tougher gun control laws, ostensibly to prevent future school shootings like last month’s tragedy in Parkland, Florida.

“There cannot be two sides to doing everything in our power to ensure the lives and futures of children who are at risk of dying when they should be learning, playing, and growing,” the march’s official mission statement reads.

There are a few obvious parallels between Saturday’s event and January’s annual March for Life, also in D.C., which makes it all the more glaring how differently the mainstream media covered the two.

The gun-control march received breathless headlines about students “tak[ing] aim at [the] NRA” and voicing their expectations for politicians, and features on the “most powerful signs” held by protestors, the “most powerful young speakers,” and the “most memorable moments.” Most of the headlines matter-of-factly run with the name “March for Our Lives,” often without referencing gun control or providing so much as a quotation mark to distance their pretense of objectivity from the event’s self-serving branding.

“CNN and MSNBC have extensive, all-day coverage planned. CNN starts special coverage at 6 a.m. Saturday, while MSNBC rolls at 8 a.m,” the Baltimore Sun’s David Zurawik wrote Friday. Meet the Press host Chuck Todd even declared the march “right up there” with the civil rights demonstrations of the 1960s.

The March for Life is also massively attended every year. It’s also dominated by passionate young people. It also has unforgettable signs and powerful speeches by national leaders, celebrities, and individuals directly affected by the issue.

Yet how much airtime did ABC, NBC, and CBS devote to the most recent march protesting abortion? Less than two minutes in the Friday leading up to the event, despite the fact that this year Donald Trump became the first sitting president to address it via live video. (In fairness, the march got a whopping 21 minutes, 51 seconds the year before, thanks to the newly-elected Trump sending Vice President Mike Pence and White House counselor Kellyanne Conway to the march.)

And when the press did cover it, it tended to be with headlines like “Abortion opponents march in D.C.” or “President Reaches Out To Foes Of Abortion,” and “Photos: Anti-Abortion Activists 'March for Life' in DC.”

March for Life coverage took pains to identify the underlying issue being protested. There’s nothing inherently wrong with that. But it is a suspicious contrast to the framing of the March for Our Lives as a broad, unifying stand for “school safety” rather than putting its gun-control objective front and center.

In fairness, at least one ABC News segment acknowledged the March for Life’s “huge crowds,” but overall there was nothing like this past month’s anti-gun adulation, no special features on the pro-life event’s amazing speeches, moments, or personal stories.

In fact, NewsBusters notes that some outlets such as USA Today are even exaggerating the March for Our Lives’ popularity, taking at face value organizers’ claim to have had roughly 800,000 attendees after it was determined it probably only got around 200,000 – a turnout far smaller than the 400,000 the March for Life is believed to have gotten in 2012 or the 650,000 it got in 2013.

The reason for the double standard is no mystery. The mainstream media vastly prefers one to the other, and does everything they can short of saying so to get you to prefer it, too. Nor is it a shocker that the media is biased against the pro-life cause. But given the events’ parallels, the double standard offers one of the best examples yet of the Left’s moral insincerity.

Whatever one thinks the solution to gun violence may be, there’s an inarguable difference between 122 mass school shooting deaths since 1999 and over 900,000 abortion deaths every year, between horrific failures of existing protections and horrors continued because the law forbids protections. Yet not only are those most self-righteous about the former AWOL on the latter, they actively support the side of killing.

So, don’t let anyone tell you leftists simply want to ensure everyone has a life free from violence.