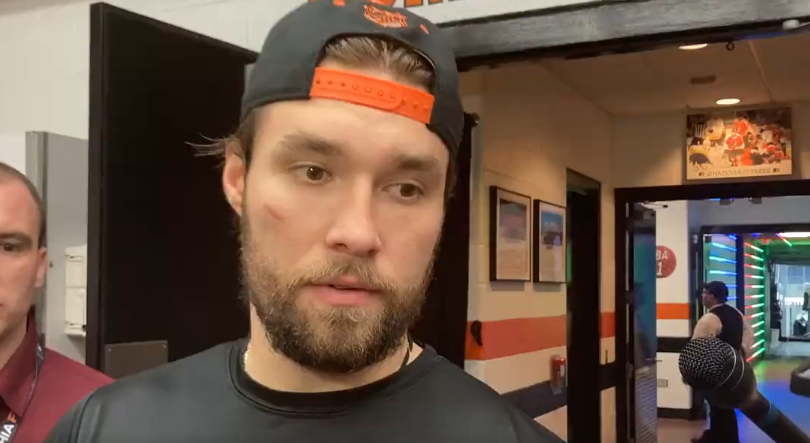 (LifeSiteNews) — As a lifelong, passionate ignorer of professional sports, I do not know much about the National Hockey League beyond what has been inflicted on me against my will. But as it turns out, I do know more than many sports commentators. The latest NHL controversy has nothing to do with fights, or a bad ref call, or anything else related to, you know, the sport. It is about Ivan Provorov, a defenseman for the Philadelphia Flyers declining to wear a rainbow jersey during a warmup “Pride Night” game against the Anaheim Ducks on January 17.

Asked about it by reporters, he cited his Russian Orthodox faith. “I respect everybody’s choices,” Provorov told reporters after the game. “My choice is to stay true to my religion, that’s all I’m gonna say. That’s all I’m gonna comment on that. If you have any hockey questions, I would answer those.” Hockey, of course, is far less interesting than the sexual politics that are now somehow part of it, and so a reporter pressed him. “Did you not hear what I just said? Can you respect that?” he responded politely.

As it turns out, there are plenty of journalists who cannot, in fact, respect that. The most notable example was Sid Seixeiro, a Canadian TV broadcaster with Breakfast Television on CityTV who was utterly apoplectic (although unfortunately not speechless) that Provorov refused to physically wear a shirt that signaled support for Seixeiro’s preferred worldview:

Seixeiro called on the NHL to “fine the Flyers a million dollars for this … I’m not kidding. Figure this out and stop offending people on nights when it’s not about that, it’s supposed to be about inclusivity.” In order to model this sort of inclusivity, he went on to say, “Nothing scares me more than any human being who says ‘I’m not doing this because of my religious beliefs’ because when you look at people’s lives who normally say that publicly you’d throw up at what you saw. I’ve seen that a million times in a lot of different ways, so don’t give me that … don’t feed me the religious beliefs line.”

Let’s lay this out clearly here for a moment: In the name of inclusivity, this fellow wants a hockey player who has politely declined to wear a shirt with the ideological symbol of a movement he respectfully disagrees with to be punished to the greatest professional extreme possible and says that this man likely lives a life that would make you “throw up.” His version of “inclusivity” is someone actually wearing clothes on their physical person that signals support for what he believes. I presume, of course, that he wouldn’t be a fan of wearing a jersey with, say, a cross on it for “diversity night”—because this garbage only runs one way.

— Article continues below Petition —
Stand with brave priest who was SUSPENDED after defying the LGBT agenda against his abbot’s wishes!
Show Petition Text
12791 have signed the petition.
Let's get to 15000!
Thank you for signing this petition!
Add your signature:
Show Petition Text

Seixeiro was the most egregious example of intentional stupidity in response to this non-story (“hockey player declines gift of political shirt”), but certainly not the only one. Bruce Arthur of the Toronto Star tweeted, “John Tortorella once said he would bench any player who didn’t stand for the US anthem. So what have we learned here.” Well, what we’ve learned is that the anthem of the country is not the same thing as the Pride flag, no matter how hard activists attempt to pretend that it is. This isn’t difficult stuff, although Canada’s media drones are sure trying to make it seem like it is. Sports reporter Marc Dumont chimed into say that Jesus would also be calling out Provorov, proving that he should really, really stick to sports writing rather than exegesis.

Pierre LeBrun of TSN was also angry about Provorov’s wardrobe, claiming, “But Provorov obviously does not respect ‘everyone.’ If he did respect everyone, he would have taken part in warm-up and worn the Pride Night jersey. Don’t hide behind religion.” Because to respect people, one apparently has to not only agree with them ideologically and support every aspect of their lifestyle, but wear clothing that signals this fact. Also at TSN (these guys are sports commentators?), Gord Miller opined that Provorov should not have been allowed to play due to his refusal “to participate in the Pride Night activities.”

These people are pathetic. The fact that they pull a salary to spout this nonsense is an indictment on the entire media. Sid Seixeiro’s crybullying is a joke — the idea that a group so powerful it is considered standard in professional sports to wear a shirt supporting their agenda is also so persecuted that people should be persecuted for not showing overt support is beyond ridiculous. Tortorella, fortunately, has stuck by Provorov. “He’s being true to himself and to his religion,” he told the press. And the hysterical queens going after the player did accomplish at least one good thing: His jerseys promptly sold out at the NHL shop. It turns out that when people support something, they choose to wear the shirts — voluntarily.