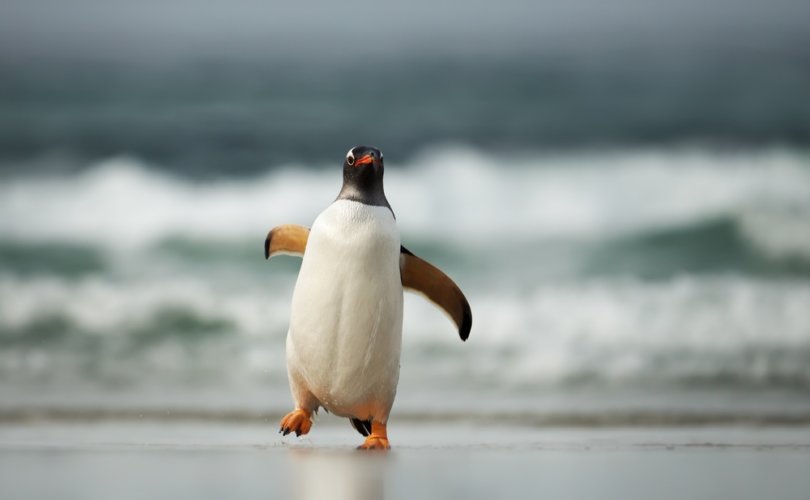 September 11, 2019 (LifeSiteNews) – When I first spotted the headline on Sky News, I genuinely thought it might be a joke. “An adopted Gentoo chick raised by a same-sex penguin couple will become the world’s first penguin not to have its gender assigned,” Sky News tweeted out. “At 6:40 am we will be speaking to Charlotte Barcas, a [sic] Aquarist at the London Aquarium who looks after the penguin.”

This seemed like one of those hoax stories that a clever progressive trickster might invent just to trigger mockery and outrage on the Right, only to point out later that it was obviously a trolling exercise and that of course progressives are not imposing brand-new (and increasingly stupid) gender ideologies onto wildlife locked up in zoos. But then I saw the headline over at CNN: “London Aquarium to raise ‘genderless’ penguin.”

One might be justifiably confused by this headline into thinking that the penguin in question has no gender. The truth, of course, is that the zookeepers have decided to attract attention for their penguin program by using woke language and marshalling their animals into battle for the LGBT crowd—who, incidentally, are delighted. Pink News ran the story with the headline, “Penguin chick raised by same-sex penguins revealed to be gender neutral,” going so far as referring to the penguin pair as “lesbians.” All of that is, strictly speaking, nonsense.

But the story is already taking off as media outlets, eager to pretend that there are implications for the current conversations about LGBT issues our culture is having, produce breathless stories with ideological agendas so obvious that they would be laughable if they were not intended to be taken so seriously. The Metro UK’s headline humanized the penguins, gave them moral agency, and put them at the head of Penguin Pride: “Gay penguin couple adopt first gender-neutral penguin at London Aquarium.” See? Another one of those lovely trans families we’ve been hearing so much about these days.

The details of the actual story (if one can call it that) are substantially different. Two female penguins were given an egg taken from the actual mother to ease the pressure of raising two chicks, and for the time being, Sea Life London has decided not to tell anyone whether the chick is male or female (leading to some confusion in the mainstream press, or at least among the headline writers, that we have a non-binary bird on our hands). The decision, as I mentioned, was an obviously political one, in keeping with the media’s insistence of infusing gender ideology into every story they can find. From CNN:

Experts at the aquarium usually give newborn penguins gender-based names, but in this case “decided it was more natural for the chick to grow and develop into a mature adult as genderless which is normal in the wild until they mature,” the centre said in a press release. The chick has been fitted with a purple tag on its wing so it can be identified.

“While the decision may ruffle a few feathers, gender neutrality in humans has only recently become a widespread topic of conversation, however, it is completely natural for penguins to develop genderless identities as they grow into mature adults,” said General Manager Graham McGrath. “What makes us really proud at the aquarium is the success of Sea Life London's Gentoo breeding program and the amazing job of same-sex penguins Rocky and Marama who took the chick under their wing and raised it as their own.”

Rocky and Marama were given the responsibility of raising a chick after showing themselves to be a “close couple” for the past six breeding seasons and proving that they could create nesting conditions to raise a chick, the aquarium said.

The penguin may later be incorporated into Sea Life London's breeding program, “depending on the gender its biology determines,” the aquarium added.

And just like that, CNN ruins everything. As it turns out, this penguin does in fact have a gender—and it is determined by biology, not ideology or self-identification (as if animals were even capable of that). Despite the novelty of a gender-confused penguin that the media are falling all over themselves to promote, even the zookeepers can’t stick to the script long enough to hand the trans activists a win.

I wish I could say that this story was an eye-rolling anomaly, but somehow I doubt it. LGBT activists are declaring a total war on reality and everybody—and everything—will be pressed into service. Even, as it turns out, the penguins.