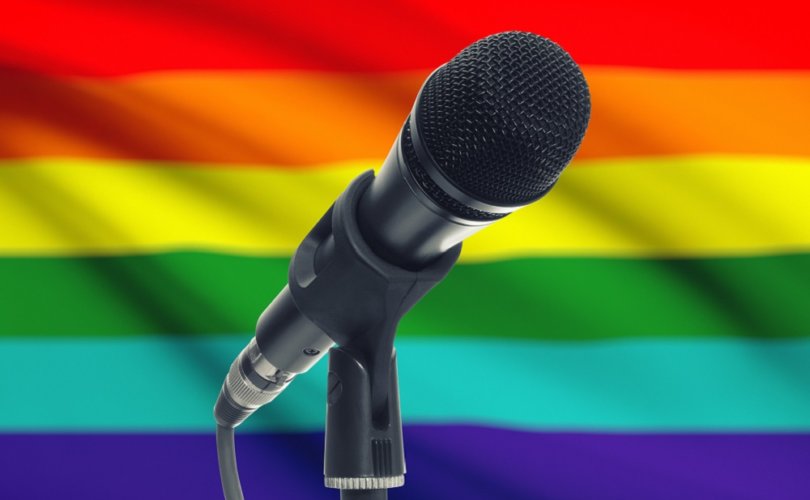 (LifeSiteNews) — At the 2018 Oscars, while Hollywood was in the throes of revelations about Harvey Weinstein’s serial predations, Jimmy Kimmel took the stage to mock those who still hold to a Christian view of sexuality. Referring to a gay love story featuring a teenage boy and a 24-year-old man, Kimmel noted to raucous laughter: “We don’t make moves like Call Me by Your Name to make money. We make them to upset Mike Pence.”

I was reminded of that quip when I saw yet another story about a biological male identifying as female getting featured on the front page of another prominent magazine. Last time, it was the infamous swimsuit edition of Sports Illustrated. Now, transgender Ariel Nicholson will soon grace Vogue as a cover model. From Glamour to TIME, transgender pinups are all the rage.

I suspect that this goes beyond a desire to mainstream the transgender movement, although there is certainly that. Part of this is the desire, expressed by Kimmel, to rub their sexual identities in the faces of all those who still dare to disagree. He framed it as a joke, but it is impossible to miss the underlying contempt. That’s why it was such a laugh line at the Oscars—the room filled with celebrities understood what he was saying. Those dumb hicks don’t know what’s good for them, and we’ll force-feed it to them every way we know how.

Conservative commentator Douglas Murray observed this phenomenon in his recent book The Madness of Crowds: Gender, Race, and Identity:

Perhaps is requires someone who is gay to say this, but there are times when such ‘news’ reporting doesn’t feel like news reporting at all. Rather it seems that some type of message is being sent out either to the public or to the people whom the media believe to be in positions of power. This goes beyond ‘This will be good to you’ and nearer to the realm of ‘See how you like this, bigot.’ There are days when you wonder how heterosexuals feel about the growing insistence with which gay stories are crow-barred into any and all areas of news.

As an example, Murray, takes a look at the New York Times on an average day—October 16, 2017. The lead story in the business section, he notes, was “Gay in Japan and No Longer Invisible.” In Japan, people treat homosexuality with “indifference rather than hate,” and in response, Murray observes drily, the “New York Times had chosen to splash a story over two pages, as their lead Business feature, about how a man had come out in a company with no negative consequences in a country that had no special problem with gays.”

And that wasn’t all, either. “Turn one page and the story continues,” Murray notes, “this time under the headline ‘Companies in Japan More Welcome to Gays.’ By which point the casual reader may well have satisfied their interest in the position of gay men in Japanese companies and begun casting their eye guiltily to the opposite page and the ‘Culture’ section. And what is the lead story and main headline there? ‘A Broader Stage By Love.’” This story is about the proliferation of gender-neutrality and other LGBTQ storylines over at the New York City Ballet, where, “to the amazement of nobody, it turned out that several of the male leads…are themselves gay.”

Now, Murray goes on to say, there “is nothing wrong with a newspaper of record deciding to devote its Business and Culture pages as well as much of its opinion and news pages to stories about being gay. But it sometimes feels as though there is something else going on in all this. The use of gay special interest stories for purposes other than those of actual news: perhaps making up for lost time, or perhaps just rubbing things in the faces of those not yet up to speed with the changed mores of the age. Either way something strange and vaguely retributive is in the air.”

He’s 100% right. I suspect that Glamour, Vogue, TIME, National Geographic, Sports Illustrated, and others are just the beginning.