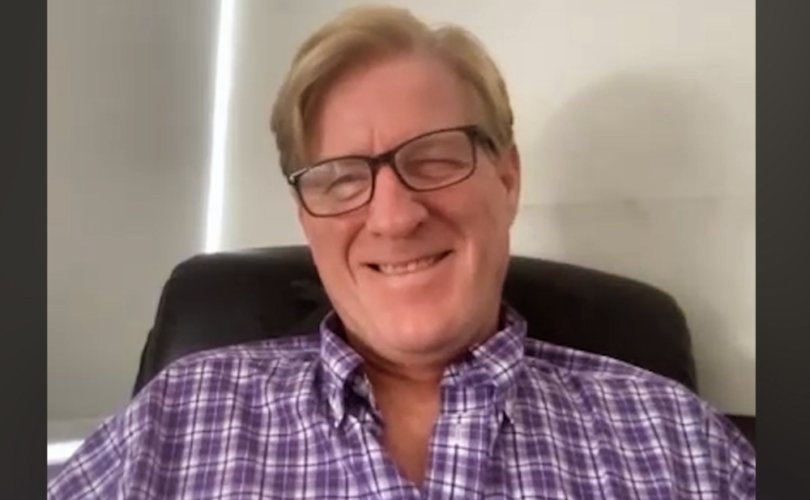 (LifeSiteNews) – Since the start of LifeSite’s new show Faith & Reason, some of our readers might want to learn more about one of the participants of the show, Jack Maxey. “Who is this man,” they might ask, also because Steve Bannon on his War Room Pandemic show just recently praised Maxey.

“You want to know everything about the Biden family,” Bannon stated on February 24, “go to Jack Maxey’s twitter account… or call Jack Maxey, DM him on Twitter and let him walk you through the laptop from hell, because Jack will walk you through chapter and verse, he’ll show you. You come for the pornography and you stay for the compromise. Disgusting and revolting.”

Maxey, ever since he was banned from Twitter, can be followed at Gab and Gettr.

The Yale graduate (class of 1988) became more known to the public when he joined Bannon in 2018, and became the co-host of Bannon’s War Room. Here, he was known for his competence, quiet strength, and deep insights. His Catholic faith – he is a convert – shone through when quoting St. Augustine, among others. At the time of the corona-crisis, Maxey was among the first to endorse hydroxychloroquine as a medication against the coronavirus, favorably discussed the then-diabolized Swedish approach to the pandemic, and argued against lockdowns. As he told LifeSite, he still stands by those comments.

After college Jack served as an officer in the U.S. Navy Reserve. He has lived in “multiple geographies”, majored in history at Yale, worked on Wall Street as a trader and fund manager and has devoted much of his life to deep analysis, culminating in becoming Bannon’s chief of research in 2018.

In October 2020, Bannon received a copy of the Hunter Biden laptop that became Maxey’s mission and mandate. After Bannon asked him to research the material for the War Room show – Jack’s having worked for a decade on Wall Street and his political expertise made him a perfect candidate for such an endeavor – the political analyst and historian realized that his knowledge of the content of the laptop gave him a moral duty. This duty is to spread the knowledge of the criminal, moral, and political corruption recorded on the laptop throughout the country, making sure that the Biden family and their accomplices will be held accountable.

For this reason, Maxey took a break from his daily presence on screen, leaving the War Room in January 2021 to dedicate his life and time to this mission. For more than a year now, he has worked tirelessly in researching the content, giving interviews about it, contacting media outlets and politicians. For example, Maxey explained to LifeSite’s John-Henry Westen in two interviews the content of the Hunter Biden laptop and the multiple crimes it reveals.

The first step Maxey took was to publish a chunk of the e-mail content of the laptop, partly due to warnings of expert friends who worried about the safety of Maxey’s life. He posted links to the material on different websites, but only the Swiss domain allowed it to stay; in the U.S., U.K., and New Zealand, these files were quickly deleted, as Maxey told LifeSite. Maxey then approached different media outlets, offering them a copy of the laptop. According to Maxey, the Daily Mail took a copy on March 3 and “has really done a solid job after having laptop verified by Maryman and associates.” See here how the Daily Mail relates in detail how these forensic experts confirmed the authenticity of the laptop. They began publishing in April. The Washington Post received a copy in June 2021. But every other mainstream outlet has refused a copy.

The Daily Mail published dozens of articles over the course of last year, revealing multiple facets of Hunter Biden’s corrupt political and economic endeavors, often with ties to his father. Some of the material the Daily Mail uncovered relates to the current conflict in Ukraine, since Hunter Biden sat on the board of the Ukrainian gas company Burisma and received high sums – $50,000 a month – for doing so. In 2016, a State Department official warned that Hunter Biden’s business dealings in Ukraine “undercut the anti-corruption message” that his own father was publicly promoting.

The Ukrainian angle of the Hunter Biden laptop came first to light when the New York Post reported, in October 2020, that Hunter Biden introduced his father, who was then Vice President, to the Ukrainian energy firm Burisma in 2015. He did so less than a year before Joe Biden pressured government officials in Ukraine into firing a prosecutor who was investigating the very same energy firm.

Rep. Marjorie Taylor Greene just now accused President Biden of being weak in the Ukrainian-Russian conflict, saying that “the president of the United States is totally compromised because every world leader has contents of Hunter Biden’s laptop and much more to blackmail him.” She added: “So it’s no wonder America is weak. We have a president who puts America last because he is literally serving China, Russia and the world. He is a globalist.”

Other media reports also indicate a growing interest in the shady business dealings of Hunter Biden, also in light of possible criminal charges in tax matters against him in his home state of Delaware.

But let us return to Jack Maxey. Not only did he give a copy to the Daily Mail and gave them advice, he also has now been working both with the Washington Post and the New York Times. It is much hoped that these giants of American journalism who both received a copy of the laptop from Maxey are doing their due diligence and will soon start reporting on the content of the laptop. It surely would break the dam of silence that surrounds this topic.

In spite of that silence and the fact that most media are not even interested in receiving a copy of the laptop, Maxey is tireless in his efforts to spread the truth. In February, he posted on Gab an offer to all international media to give them a copy of the laptop:

At least the #CCP can be reassured by how many at News Corp have turned down #Hunter’s #laptop. Sadly not much to fear there for the Chinese communists. To all the journalists – the offer still stands, from Sydney, to DC to London reach out and a copy can be delivered in under 48 hours. My advice, grow a pair and fight back.

Moreover, in July of last year, the political analyst gave a copy of the laptop to Senators Chuck Grassley and John Kennedy and other members of the Senate Judiciary Committee, telling them that he had “confidential informants who would be willing to testify concerning many of the crimes both here and in other geographies including communist China.” He also offered to brief the senator and to testify under oath. While Grassley has acknowledged receipt of the laptop, and while he has made some more inquiries about topics related to it, he has yet to schedule a hearing on the laptop and make the content known to the nation.

Maxey himself is calling them out to do something about the laptop. At a recent event with Young Republicans of Montana, Maxey showed the laptop of Hunter Biden to some people of the audience. He also continues to post e-mails and documents from the laptop on his social media accounts on Gab and Gettr. For example, he just posted a bill that shows that as of 2019, Hunter Biden was still receiving thousands of dollars from Burisma every month.

It is impressive what one single man who loves his country and is willing to put his life at risk for the truth and defense of it can accomplish when he is inspired by this love and his Catholic faith. May his endeavors be successful, and may the Biden corruption be fully revealed, for the sake of our nation.

Our readers can follow Jack’s work here at LifeSite in the first three episodes of our new Faith & Reason show with him (one, two, and three), John-Henry Westen, Elizabeth Yore, and Father James Altman. There we can witness, once more, Jack Maxey’s confident wisdom, his eloquence, his deep faith, and his joy.