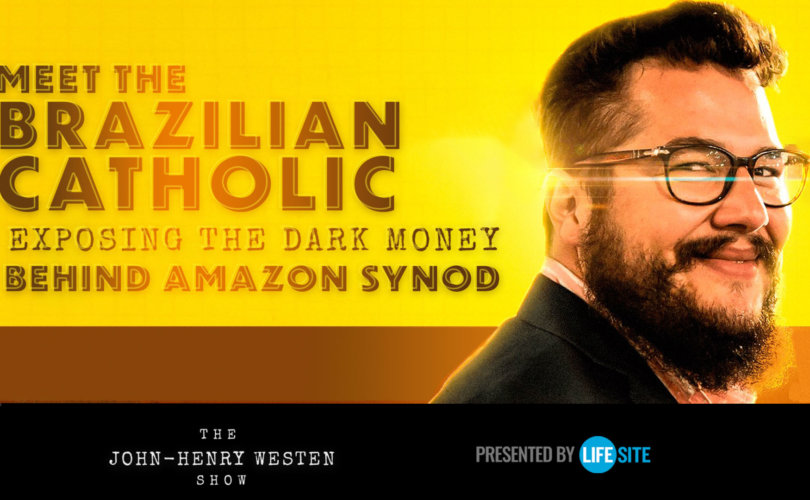 October 23, 2019 (LifeSiteNews) — Bernardo P Küster is a Brazilian Catholic commentator whose YouTube channel has nearly 800,000 subscribers. In this episode 37 of The John-Henry Westen Show, he and I discuss the Amazon Synod and the dark forces behind it.

Bernardo was baptized Catholic but admitted to me that he was “not well catechized.” After becoming an atheistic agnostic, he turned to communism. Later, he became a Baptist and then a Catholic. He says St. Therese of Lisieux helped him grow in his faith during what he called a “key moment” after praying a novena to her.

Bernardo and I spoke about the rich Catholic history of Brazil. He mentioned Archbishop Antônio de Castro Mayer of Campos and Professor Plinio Corrêa de Oliveira. We then shifted into the Amazon Synod and how liberation theology was popularize in Latin America by such figures as Gustavo Gutiérrez

There is “fake news” coming from this Synod, Bernardo told me. He and I spoke about how one bishop was boasting about not having baptized a child in 25 years. Bernardo says the clergy aren’t really serious about bringing the sacraments to souls in need and that they are promoting an “indigenous theology.” There are bishops conducting “disinformation,” he exclaimed.

We then discussed the dark money influencing the Synod. Bernardo mentioned REPAM (a Pan-Amazonian network that helped draft the Synod's working document) and its ties to pro-abortion and pro-transgender organizations like the Rockefeller Foundation, Ford Foundation, MacArthur Foundation, and the Open Society Foundation.

Bernardo's explosive findings include evidence that the CIMI (the Missionary Council of Indigenous Peoples) has “received significant funding from the Ford Foundation.” Bernardo says these groups have “invested” millions of dollars into the region and are engaged in a “geopolitical” effort to use the Church in order to go after the minerals in the region’s soil, which he said are estimated to value more than 23 trillion U.S. dollars. He believes Church officials are involved in this and that they may have been promised money, a church building, or something similar.

Bernardo believes the Synod will ultimately be very cagey with how it deals with women’s ordination. But, he said, Pope Francis has already spoken positively of married clergy. Bernardo believes Catholics in these times need to 1) have a prayer life 2) study their faith 3) be in communion with other people and 4) defend the faith.