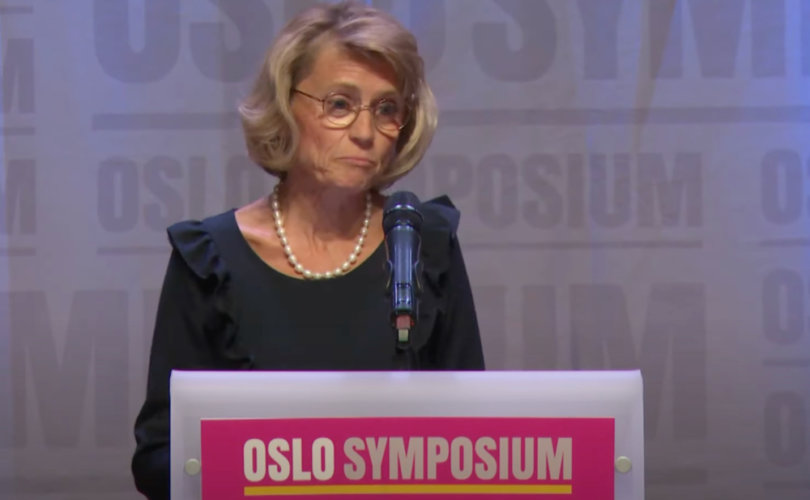 (LifeSiteNews) — This month, a politician in a Western nation will be going on trial for quoting the Bible in public.

This is not an exaggeration. On January 24, Finnish parliamentarian Päivi Räsänen will face charges for defending the Bible’s definition of marriage in a booklet, in a TV debate, and on social media. The media accuses the politician, pastor’s wife, mother of five and grandmother of seven of being a potentially dangerous criminal, with Finland’s Prosecutor General accusing her of making statements that are “derogatory and discriminatory against homosexuals” that “violate their equality and dignity.”

I’ve interviewed Räsänen on several occasions — for a profile in First Things last year describing her ordeal, as well as several interviews for LSN as her case progressed. Räsänen has been interrogated by the police for hours on several occasions over her public defence of Scriptural sexual ethics, and prosecutors have brought three criminal charges against her. She faces up to two years in prison if convicted. The impact on religious freedom around the world would be catastrophic.

Alliance Defence Fund International has been supporting her case for the past two years, and recently met up with her at Finland’s Parliament to discuss what she is going through. She is a warm, lovely person who served as a doctor for 10 years prior to her political career. Her ethics have always been central to her, and she strongly opposed abortion throughout her medical career due to her opposition to taking human life. She carried these ethics with her when she was recruited into politics.

In politics, she was a member of nearly every committee in Parliament. She served as chair of the Christian Democrats from 2004 to 2015, and from June 2011 to May 2015 she was Minister of the Interior of Finland, responsible for migration and internal security as well as church affairs at the Ministry of Education and Culture. She was, in short, a prominent person who engaged with policy on every level.

But when she spoke out against the Lutheran Church’s support of Pride Parade — by posting a Bible passage opposing homosexuality on Twitter — her troubles began. LGBT activists made criminal complaints against her, going back to 2004 to bring up a booklet she wrote in which she articulated the biblical case for the natural family and sexuality and digging up radio and TV appearances in which she defended the Christian position on these things. The police called her in for questioning, and Räsänen says she feels privileged that she could witness to the police, presenting the Gospel to them on several instances.

Despite the fact that she is being persecuted by the country she has served so long and well, Päivi Räsänen is smiling and cheerful during her interview. She is determined, she says, to stand on and for her faith, and she will do this no matter what the cost. Her views come from a place of love and not from hate, but despite this she is being targeted because she is a prominent figure expressing disagreement with the LGBT movement. The Prosecutor General, in fact, compared the Bible to Hitler’s Mein Kampf, and said that while people can own Bibles, the problem comes when they sincerely believe all that it contains.

Räsänen says she is nervous but calm ahead of her trial and is quite certain that democracy and freedom will prevail over the accusations of her persecutors. She very much appreciates the many prayers she has received and asks that Christians everywhere keep her case in their prayers in the coming weeks. It is, I’m sure you’ll agree, the least that we can do. If she is convicted, the chilling effect on Christians across the West will be enormous — and the emboldening effect on LGBT activists eager to persecute Christians will be equally pronounced. Aspects of Christianity would be made functionally illegal.