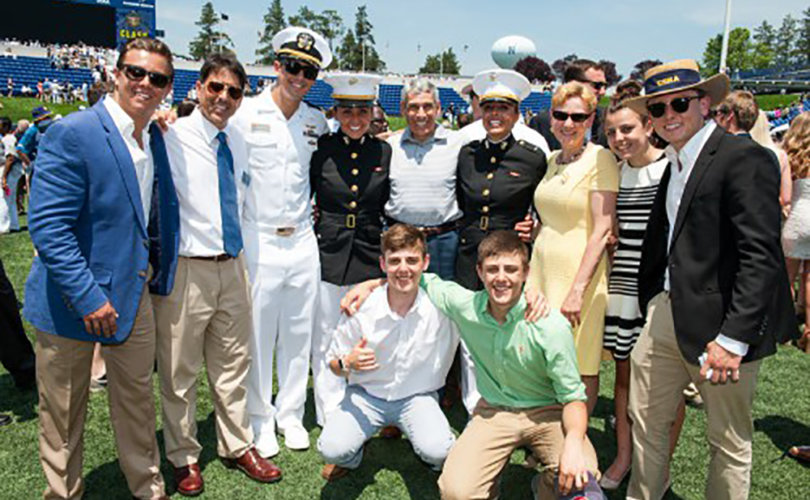 This is the 'very, very very Catholic family' condemned by Fr. Richards.

May 6, 2019 (LifeSiteNews) – New developments have compelled me to write two follow-up articles to the March 24 report on my disturbing encounter with Fr. Larry Richards. In justice, there is the good name and reputation of a now identified family to be addressed.

Also, while not belittling the spiritual direction from Fr. Richards that appears to have genuinely helped numerous Catholics and brought many back to the sacraments, there is an important general context to this story needing to be emphasized in the second of these two new articles.

That is, the main story is about a lot more than just Fr. Richards.

Members of the “very, very, very Catholic” family whose parents Fr. Larry Richards shockingly spat upon, swore and raged against in 2017 during his talk to 1,200 men at a Catholic men’s conference have contacted LifeSite. To refresh your minds please view the following two-minute video.

Many LifeSite readers, in the comments section under the original article, in emails sent to me and in many private conversations, have expressed that they were sickened and could hardly continue watching Fr. Richards’ tirade against that family or perhaps that category of daily-Mass-going families.

The general consensus has been that if Fr. Richards wanted to address an allegedly serious lack of parental encouragement and love for their children by the parents of a particular, easy to identify family, he should have done so in private with the family. It was wrong to reveal this in a video-recorded, condemning tirade in front of 1200 Catholic men.

More than a few suggested this was yet another one of Fr. Richards’ typical dramatizations for maximum effect.

One reader related that he witnessed Fr. Richards doing a similar spitting and vulgar, angry tirade against EWTN’s Raymond Arroyo. Another recalled seeing Fr. Richards criticizing Mother Angelica. Both Arroyo and Mother Angelica have publicly expressed concerns about various bishops and Arroyo has on his The World Over program many times professionally discussed disturbing actions or statements by Pope Francis.

To Fr. Richards, expressing such concerns is never permissible.

He threatens the questioners with “eternal damnation”, even though Canon Law and Church tradition not only give Catholics the right to express such concerns but even require those who are certain of serious transgressions or scandal by clerics to speak up. Richards totally fails on orthodoxy on this as well.

“Christ's faithful have the right, and, indeed, sometimes the duty, according to their knowledge, competence, and dignity, to manifest to the sacred pastors their judgment about those things which pertain to the good of the Church.”

Through his frequent condemnations, Richards appears to follow Pope Francis who similarly harshly rebukes any clergy whom he learns have said anything critical about him, even in private conversations.

The first indication that Fr. Richards was definitely referring to a specific family, rather than a few or all large, daily-Mass-going, allegedly hypocritical families, was a comment from a reader.

“I know the family he is referring to, there’s only one large family that attends daily mass whose kids are in the Navy and top swimmers and whose children have moved away. It is a gross misrepresentation of the family and it is egregiously unjust for this priest to badger them and to portray them in such a negative light. That father is a man of impeccable character and he and his wife are totally committed to their marriage, family and children. Anyone else who would treat military parents in this way would be ridiculed, scorned and rejected. Thank you for your service even if Father Larry spits on you.”

I later learned that the commenter is in a position of authority in the Church and I had a 45-minute telephone conversation with him.

Eventually I learned that to many Catholics in the Erie diocese it could only have been one prominent family that Fr. Richards so harshly and publicly judged and about whom he made false and exaggerated statements in order to dramatize an otherwise valid lesson about Catholic parenting.

The family members themselves only became aware of this 2017 public tirade against them when a friend sent them a link to the video that was in my March 28, 2019 article.

Then I received an email from Catherine Stark, daughter of Beata and Bud Stark who reside in Fr. Richards’ Erie Diocese. Catherine wrote,

“I am emailing you regarding a recent video I was sent by a hometown friend published on Life Site News where Fr. Larry Richards references and personally attacks my family.

Fr. Larry Richards is the pastor at one of the Catholic parishes in my hometown of Erie, PA. Although we are not parish members, we attend mass there sometimes and also attend adoration in their adoration chapel. I am from a family of 10 (5 brothers, 2 sisters + my parents). To provide context for my email I will provide you with some background information. I am the fourth eldest of eight. The eldest boy works in Maryland, I have a brother in the Navy stationed out of Little Creek, my sister is a Marine stationed in Miramar, and I am also a Marine training to be a fighter pilot in Kingsville, TX. Number 5 and 6 are college students in our hometown of Erie, and number 7 John-Paul and 8 Mary-Claire are junior and senior in high-school in Erie. Goes to show you his exaggerated claim that we all “left the state”…I suppose he's half-right given the fact that 3/8 of us are in the military.

It's a sad day when priests publicly attack faithful laity. His comments about my parents could not be further from the truth. My parents are unconditionally loving people who for the past 29 years of having children have laid their lives out for us. Not to mention the example they are to us children and our community of what it means to live as a Catholic.”

That was followed by son Peter Stark sending me a copy of his email to Fr. Richards in which he stated,

“In this video, you are spewing disturbing, hateful lies about an unnamed family.

To me and many others who have seen this video, it seems as though you are clearly, yet inaccurately describing my family. Specifically, my parents.

As the oldest Stark child, I can speak to the fact that my parents gave all of us children the greatest gift possible; their love and support. Their love for us is deep and unconditional and stems from unbelievable sacrifices that we've witnessed throughout our entire lives.

As a professional businessman living in Maryland, I practice my faith devoutly and how the greatest teachers, my parents taught us.

I demand that you retract your statements made during this tirade and you issue an apology to my parents.”

This was followed by communications first from Beata Stark, the mother, an immigrant from formerly Communist Poland, and then her husband, Bud.

Lastly, I had a few telephone chats with their son Joseph, the one in the Navy that Fr. Richards had a meal with in 2017.

All of these communications revealed that

Joseph also stated that Fr. Richards “has done a lot of good for the Church” but it seemed that his tirade, exposing by the descriptions given which specific family he was condemning, “seemed more like a personal attack than trying to teach people” about the faith. He expressed disappointment that Fr. Richards “betrayed my trust”, so publicly exposed his family to criticism and exaggerated or misstated a number of things about him and his family.

The Starks have known Fr. Richards for many years and have had him in their home for dinner. He was an associate pastor in their parish for a few years. Bud Stark exclaimed that “We have never been his enemy” and credited Fr. Richards for rightly challenging him on his inadequate prayer life several years ago.

It seems the hostility from Fr. Richards began after Beata Stark sent him several emails. One noted the dramatic differences between the traditional Holy Week lamentation she experienced in Poland compared to the histrionic Passion talk that Fr. Richards always gives.

The other few emails objected to the priest’s support in homilies for Pope Francis’ advocacy of open borders and implementation of globalist climate change policies, the comparison of ISIS to the crippled person that the Samaritan helped in the Gospel and the claim that Christians and Muslims worship the same God.

That last email was a two-line one with a link to the article Why Islam is Not a Religion for Fr. Richards to consider.

The Stark’s daughter, who majored in Arabic and middle eastern studies at the U.S. Naval Academy, asked her mother to forward the link to Fr. Richards for his information.  The article was part of her Naval Academy studies. She had just come home from a language immersion program abroad, attended a Mass celebrated by Fr. Richards and was distressed by how very mistaken he was about Islam in his homily.

The response to that email From Fr. Richards was “Please DO NOT email me ever again!”

Fr. Richards’ tirade against the parents, during which he said “I cannot take these Catholics because all they do is judge everybody else and they’re so holy,” “I hate those types of parents” and “they hate Pope Francis because he is not their type of pope,” just had to be far more about Pope Francis than about teaching the importance of unconditional love and affirmation.

The Starks, as well as LifeSiteNews, Church Militant, One Peter Five, the Lepanto Institute, Raymond Arroyo, and others that have all been the subject of similar tirades from Fr. Richards in front of his large audiences, do not “hate Pope Francis.”

As far as I am aware, they all pray for him every day. But to Fr. Richards any, even respectful questioning of Francis, is perceived as being “hate”.

It seems everywhere we turn nowadays, disagreement is labelled as “hate.”

It strongly appears that Fr. Richards primary reason for his condemnations of the Starks and similar others, is that they dare to question Pope Francis. The parenting issue was window dressing, in my opinion, for his real intent to thoroughly trash any person or organization who criticizes the pope.

In this, Fr. Richards has become complicit in a growing Pope Francis effect where papologist clerics at all levels are increasingly denouncing faithful Catholics rather than taking the time, as true shepherds should, to respectfully respond to their legitimately serious concerns.

It is a clericalist assault on the faithful.

I expand on this Pope Francis effect in my second article Clergy who condemn the faithful see Pope Francis as a model to follow.

Church Militant to sue Fr. Larry Richards and his diocese

‘I know who you are’: Fr. Larry Richards intimidates parishioners who complained about him to bishop