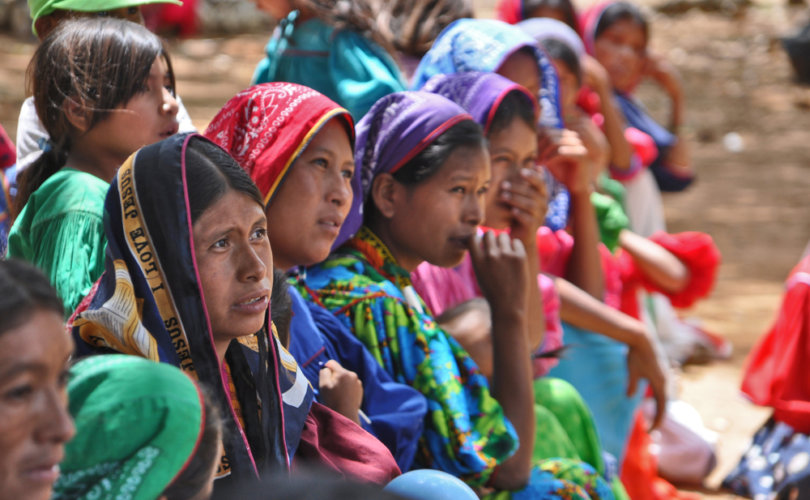 February 14, 2019 (LifeSiteNews) – As LifeSiteNews reported on February 11, pro-lifers in Mexico narrowly fended off an attempt to change the nation’s constitution in order to further permit abortion as well as redefine marriage and legalize euthanasia earlier this month. Debate on these proposed constitutional amendments, which are being championed by a handful of pro-abortion politicians, has been tabled for the time being, but legislators are under enormous pressure both domestically and internationally to modify Mexico’s constitution and include “reproductive autonomy” as well as “gender identity” as integral human rights, among others.

To find out what was happening on the ground in Mexico, I spoke with Rocío Gálvez de Lara, the national president of Comité Nacional Pro-Vida, Mexico’s largest pro-life organization. Here is our conversation:

LifeSiteNews (LSN): What is the status quo regarding abortion in Mexico?

Rocío Gálvez de Lara (de Lara): Regarding this subject we have to clarify the status of abortion by methods. If we consider chemical abortion, the morning after pill, we have to say that it's legal in our country to buy these abortifacients without any restrictions. You don´t have even to present a medical prescription given by a doctor. In contrast, if you buy an antibiotic, you have to do so. It's terrible that such drugs are available to anyone who can afford to buy them, adolescents, young people, any time they want. In 2014, only one company that distributes them reported sales for 5 million pills nationwide.

With respect to the RU-486, we know that women can buy them through the Internet and they deliver to any place in Mexico, so we don't have official numbers on how many Mifespristone pills are being sold.

LSN: What is the pro-life movement in Mexico like?

de Lara: In 1978, for the first time in our country the Communist Party presented an initiative to legalize abortion nationwide and to face this threat a group of citizens founded the Comité Nacional Pro-Vida. For a long time we stood at the head of the pro-life movement in Mexico. Last year, we celebrated 40 years since our founding. Since 1999, as the threatens became worse, there have been several other groups and movements to defend life appearing, some at a local level, others national.

LSN: What sorts of challenges does the Mexican pro-life movement face?

de Lara: Our greatest challenge is an educational one, to give our people a strong education in personal and family values so we can prevail over the culture of death which is being promoted by government and trans-national organizations.

LSN: What is public opinion on abortion like in Mexico?

We have two realities. Most people are willing to protect life from the moment of conception. Eighteen states have this principle in their local Constitutions. But some people find it hard to stand for this in particular cases, such as rape. In the case of Mexico City we have experienced a tragic cultural change in the heart and in the minds of the Mexico City inhabitants, because now they consider abortion to be a right, something banal and easy to get. Abortion promoters thought that after the fall of Mexico City the other states would fall easily, but fortunately this didn't happen. On the contrary, the other states turned to protect life in their Constitutions.

LSN: How are abortion activists and pro-abortion politicians attempting to legalize abortion?

de Lara: Abortion activists are using euphemisms and lies, as they do in other places. They´re getting strategic positions in the government, and they're bringing in the “green handkerchieves (pañoletas verdes),” a violent movement from Argentina. A group like GIRE “Grupo de Información en Reproducción Elegida” is trying to put a mask of goodness [on abortion], as they’re trying to take to cause of fighting forced contraception and “obstetric violence” against pregnant women, so to appear to be protectors of women, but they're really working to get abortion legal.

Politicians are using two methods. The first is through the Congress. Right now they have presented three initiatives to legalize abortion nationwide. But because they've found real opposition to this from the people and some legislators, they're using the Secretaría de Salud (Health Department), because the have absolute control of it and it depends only on the President’s Office to pass administrative laws to implement abortion in case of rape, even to children as young as ten years old. By this law, women can demand abortion from doctors without proof of the crime, only by their say-so. [This would be from] 12 years old, and without the parents’ knowledge or authorization. Their strategy is also to destroy the “patria potestad,” the right of the parents to protect and educate their children according to their values.

LSN: Are there any foreign influences in this attempt?

de Lara: Well, promoting the abortion agenda in Mexico, they have MEXFAM, which is an affiliate of Planned Parenthood. They are participating at the Secretariá de Salud, IPAS, Católicas por el Derecho a Decidir (CFF). Marie Stopes has several places to perform abortions in Mexico City, and they have expressed a special interest in working in Chiapas, a southern state, which is economically poor, but immensely rich in natural resources, with the greatest native indigenous population in Mexico.

LSN: How will the pro-life movement respond?

de Lara: We're working at several levels, legal, educational, social so we can strengthen the families and the culture of life. We are also offering pregnant women pro-life alternatives and help so they can have their babies. That is what they really deserve, instead of abortion.

LSN: What should we know about what is taking place in Mexico right now?

de Lara: Even though we have been stopping the abortion initiatives at the Congress and gladly promoting pro-life laws in several states, unfortunately Mexico City is sinking right now and I'm not talking about a physical phenomenon on the ground. Mexico City is sinking because of this cultural change. As I said before, the laws approved by the legislators are generating selfishness, dehumanization, and the weakening of the families and values. Last December, the majority of the legislators of MORENA at the Mexico City Congress passed a law presented, ironically to celebrate 25 years of the foundation of the Comisión de Derechos Humanos del Distrito Federal (now Mexico City) by the actual president of that Comision, Nashielli Ramírez Hernández, the diputado Temístocles Villanueva Ramos (MORENA) and the diputada Margarita Saldaña Hernández (PAN). By this law “Ley de Derechos Humanos y sus Garantías de la Ciudad de México” they established abortion as a human right, as conditions are at the moment, so this could change if the laws change; they accept all types and all kind of family structures as having all the same rights, it is a terrible law which gives more protection to animals than to people. These legislators are sinking our city, definitely.

Jonathon’s new podcast, The Van Maren Show, is dedicated to telling the stories of the pro-life and pro-family movement. In his fourth episode, he speaks with Melissa Ohden, a survivor of a saline abortion in 1977 that lasted over five days. You can subscribe here, and listen to the episode below: