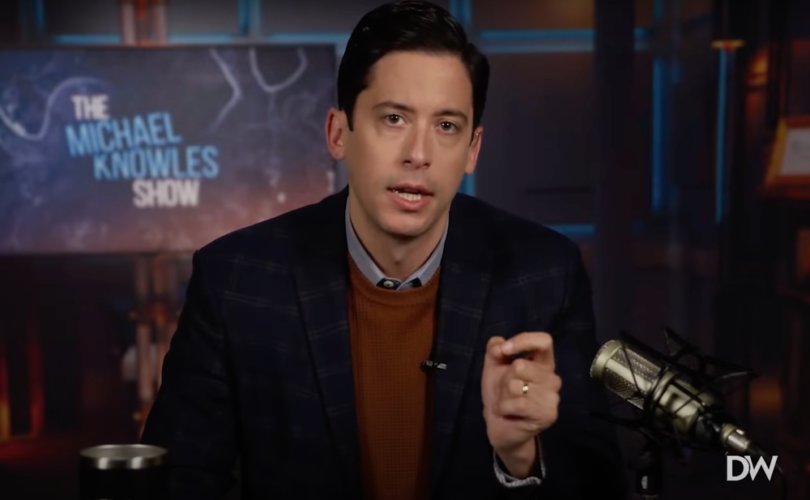 NASHVILLE, Tennessee (LifeSiteNews) — Daily Wire podcaster and author Michael Knowles says he “almost can’t look at Twitter right now” as conservatives and liberals accuse and attack one another in response to the horrific shooting at the Uvalde, Texas elementary school yesterday that  left at least 19 children and two adults dead.

In his Wednesday podcast episode, Knowles said his “hot take” on the brutal massacre is that he doesn’t have a “hot take.”

“The hideousness, the horror of the crime speaks for itself,” he said.

For the Catholic conservative podcaster and father, this is one occasion in which Americans should simply respond with prayers and civility rather than taking an opportunity to score cheap political points against their opponents.

“The reflexive political posturing that happened within minutes of this news breaking is so revolting that I just refuse to engage in it,” Knowles said, pushing both liberals and conservatives not to try to use the brutal attack to bolster their own political perspectives.

The reflexive political posturing that has occurred over the past twenty or so hours is not only classless but revolting.

It’s difficult to do, especially when the left has wasted no time demagoguing the mass shooting.

In response, some conservatives have lashed out defensively, taking the opportunity to call for armed security at schools and question why the obviously disturbed 18-year-old gunman wasn’t dealt with before he carried out his murderous rampage.

But while those might be good questions, there is a time for everything and now is not the time for campaign slogans on either side.

The truth is, an evil murderer decided to use the means at his disposal to carry out a series of horrific, senseless, and brutal acts, beginning with the attempted murder of his own grandmother and ending with the horrific mass killing of at least 19 young children.

This was nothing more and nothing less than a clear and obvious example of evil: utterly inhuman, hellish evil.

What happened in Uvalde has to do with the soul, with meaning and morality and the glaring difference between right and wrong. It has almost nothing to do with political agendas.

Those determined to strip gun rights from Americans after Uvalde should admit that even the complete annihilation of the second amendment will not stop evil men from doing evil things. Last year, a murderer rammed his vehicle into a Christmas parade in Wisconsin, killing six people and injuring dozens.

Evil men intent on destruction will find a method with which to do it.

In addition, those who advocate for mental health reform in response to brutal massacres like the one in Uvalde must also know that the implementation of more effective intervention procedures can’t perfectly shield the world from murderous psychopaths.

And even if they could, as Knowles notes, nothing now can bring back those innocent children whose young lives were senselessly and cruelly ended yesterday.

No political posturing can smooth over the agonizing grief that now consumes their parents, their siblings, and their friends.

As the nation once more reels from another brutal act of violence, the reality is that we must now brace for the onslaught of soulless politicians looking to use the horror to gain more power and strip away more rights.

There will always be those who see violence and evil as nothing more than an opportunity to assert their particular worldview and gain a foothold in national politics.

But as Knowles points out, we don’t have to be among them.

As the left decries the “thoughts and prayers” of Christians, arguing we must have “action” instead, Knowles rightly asserts that our thoughts and prayers (and most especially our prayers) are far more effective than political action, jockeying, or worse, arguing on the internet.

As we look at what happened in Uvalde, Texas, we recognize that we are staring into the face of abject evil: of hell itself. So let’s look upward to Heaven instead.

Let’s pray for those Texas families who had their children so cruelly torn from them yesterday, and hold our own families tight.

And let’s recognize that in the midst of darkness and evil, our best weapons are, and always will be, the light and truth of Christ.

Ashley Sadler is a Florida-based journalist for LifeSiteNews. She has a deep love of American history and the Traditional Latin Mass. In her free time she enjoys mountain-biking, taking road trips, and reading classic literature.

1
Police arrest Freedom Convoy leader Tamara Lich yet again
2
Why we shouldn’t be too excited by the Supreme Court’s reversal of Roe v. Wade
3
Priest’s open letter to Pope Francis: Please correct your ‘serious’ errors and defend divine truth
4
The end of Roe threatens a lifestyle, and that’s why pro-abortion backlash is so fierce
5
Both sides can agree that feminists going on ‘sex strike’ is a good thing
Subscribe to Daily Headlines »