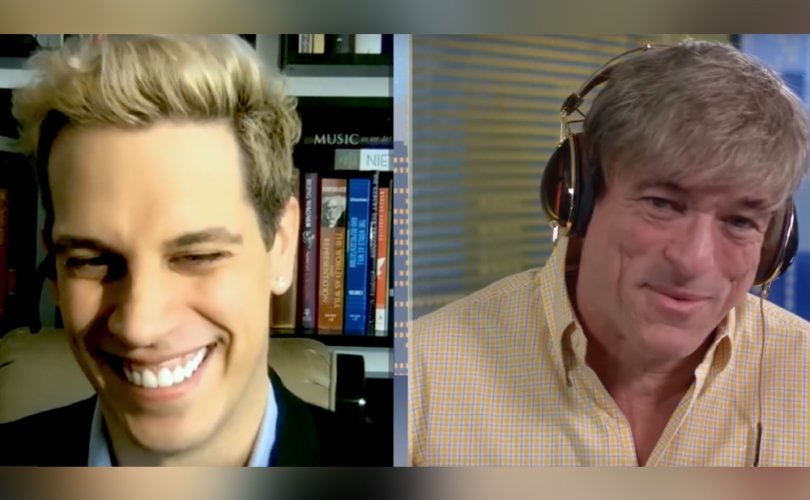 DETROIT, Michigan, January 22, 2019 (LifeSiteNews) – After an exhilarating, wide-ranging discussion between Church Militant’s Michael Voris – a chaste man – and conservative provocateur Milo Yiannopoulos – who is openly “gay” and “married” to another man – Voris asked Yiannopoulos to consider living a chaste life.

For those in the Church who experience same-sex attraction, their exchange was moving because it was an outward reflection of the same interior process that goes on within the soul of most every Christian dealing with homosexuality.

What is perhaps most remarkable about the conversation between these two strongly opinionated men who famously do not pull punches is its calm, non-combative nature.

When Voris challenged Yiannopoulos to live a chaste life, Yiannopoulos was not defensive. Instead, he acquiesced, and humbly admitted his human weakness.

“I know everything you’re saying, and I’m just not there yet. And I don’t know if I’ll get there,” said Yiannopoulos. “Ultimately this is something I’ll have to continue to wrestle with.”

“I was where you are,” countered Voris, not letting Yiannopoulos off the hook easily. “Are you capable of living chastely?”

Voris didn’t shy away from talking about sin, and pointed out that the presence of sin destroys the ability to “step into the supernatural.”

“Give me another five or ten years, and then I’m in, alright?” he said.

“I’m working on it, and I will continue,” added the normally brash conservative provocateur.

Yiannopoulos appeared very much like the rich young man in the Gospel of Mark (10:17-22) who had followed all the commandments, but who was crestfallen when Jesus told him to “go, sell what you own, and give the money to the poor, and you will have treasure in heaven; then come, follow me.”

And like that rich young man, one could envision Jesus looking at Milo Yiannopoulos at that moment and loving him (Mark 10:21).

Yiannopoulos spoke to Voris about his new book, Diabolical: How Pope Francis Has Betrayed Clerical Abuse Victims Like Me—and Why He Has To Go.

“The main purpose of writing this new book was to talk about the homosexual cancer that has infected the Vatican, and infected the College of Cardinals,” said Yiannopoulos, who said his goal is to “make the Vatican straight again.”

“The clerical abuse crisis is of course a product of gay disfunction, a product of looking the other way,” said Yiannopoulos.

“You create these seminaries where people won’t ask too many questions,” he said. “Well, of course if you’re a child abuser or a pedophile you’re going to go there, because you can get away with murder and nobody will say anything.”

Yiannopoulos said that the only way to save the Catholic Church from its current crisis is to “restore an appreciation for manhood and masculinity.”

“And one of the ways to do this has got to be to clear out these gay priests,” he suggested. “How can you expect people with such complicated and dysfunctional relationship to their own manhood to be able to teach young boys about how to be men?”

And often the gay men who become priests are the more effeminate types, so “How can you expect people like that to appeal to young men?”

“If you create the space in which sexual misconduct is routinely overlooked,” observed Yiannopoulos, alluding to what has gone on in seminaries and dioceses for decades, “what you do is create institutions where people with other things wrong with them come as well.”

Yiannopoulos said there is a strong, obvious link between homosexuality and pedophilia – which the left can’t bear to have pointed out: “Pedophiles are much more likely to be homosexuals.”

“I think they also don’t like being reminded how disordered they are. Nothing upsets a leftist like you brazenly telling them the truth,” said Yiannopoulos, adding, “People only become social justice warriors because they are hurting, and they want other people to hurt, too.”

A reawakening in the Church?

“We had bra burning in the sixties and seventies,” said Yiannopoulos. “I want to see protesting women burning their briefcases and marching in support of motherhood and the family.”

He pointed out how Generation Z kids have witnessed firsthand how “utterly miserable” their feminist parents’ lives are, and “how their bad choices have led to bad outcomes.”

“I seem to have this ability to see around corners,” declared the conservative provocateur. “I can see what’s coming.”