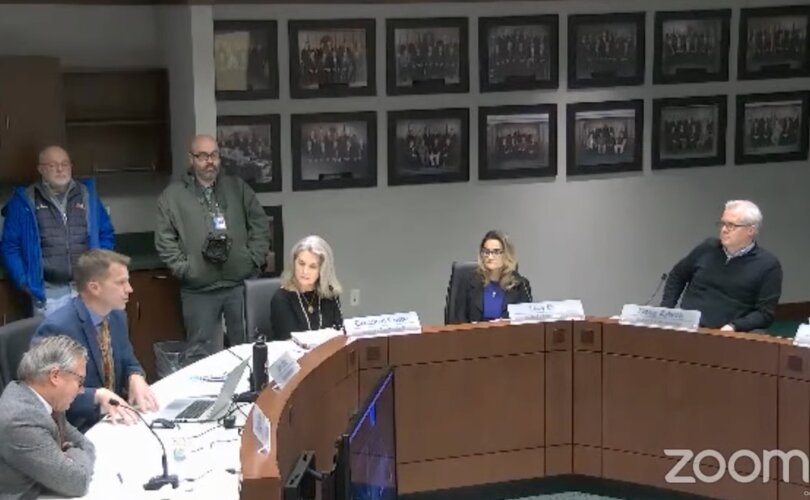 (LifeSiteNews) – Newly elected lawmakers in West Michigan’s Ottawa County are going all out against woke-ism, leaving liberals, moderate Republicans, and local media in tears as they institute real reforms. Their example should be followed by conservatives across the country.

Thanks to an effective pro-family (and pro-medical freedom) message — as well as a forward-thinking campaign strategy — eight members of the recently-formed Ottawa Impact PAC won seats as county commissioners last year. That means nine out of the board’s 11 total members either belong to or are endorsed by the group.

In its victory, Ottawa Impact, which is staunchly pro-life, ousted an impressive seven RINO incumbents. The group’s slick marketing campaign included the well-produced video below.

One of the commission’s first orders of business at its inaugural meeting this week was the abrupt elimination of the diversity, equity, and inclusion department, saving taxpayers hundreds of thousands of dollars. The board also announced the demotion of the county’s COVID-supporting health adviser.

Furthermore, commissioners changed the county’s bland “Where You Belong” motto to “Where Freedom Rings,” stating in a patriotic-themed resolution that the prior slogan was used to promote “the divisive, Marxist ideology of the Race Equity movement.”

Joe Moss is co-founder of Ottawa Impact, which he started in 2021 after his daughter’s classical Christian school refused to comply with leftist Governor Gretchen Whiter’s mask mandate. A thirtysomething politico who was named by his peers as the commission’s chairman Tuesday, Moss is unapologetic in what he and his fellow lawmakers are doing.

“The people of Ottawa County overwhelmingly spoke with their vote to restore the constitutional rights of the people … and to protect their individual freedoms, parental rights and freedom of religion and conscience,” he said at this week’s meeting.

.@miOttawa implemented harsh enforcement of Covid-19 orders, ignored parental rights, and trampled Constitutional freedoms. The People chose to replace the board of commissioners who failed to listen. In 2023, Ottawa will chart a new course for freedom and family! https://t.co/xVVmine6yd

Not content with their full-frontal dismantling of the left’s social justice programs, commissioners also struck a partnership with a conservative law firm to serve as in-house counsel. They then named Trump-endorsed John Gibbs as county administrator, firing the previous one on the spot.

Gibbs is an avowed, America First pro-life patriot, and an outspoken anti-lockdown and medical freedom advocate. He enjoys widespread support from grassroots leaders in the area. Although he didn’t win his race against Democrat Hillary Scholten for Congress last fall, he did manage to oust incumbent globalist Peter Meijer in the GOP primary.

On top of these victories (again, this all occurred at the commissioners’ first meeting), lawmakers named Nathan Kelly as its new medical expert. He is the husband of one of the most dedicated COVID warriors in the state, if not entire Midwest — Kristen Meghan Kelly. Mrs. Kelly is a toxicologist with nearly two decades of experience in the industrial healthcare field. She appeared on a LifeSite virtual conference with me last year to expose the dangers of the COVID shot and the absurdity of mask mandates. It’s expected her husband will ensure Ottawa County defends medical freedom at all costs.

The admirable assault Moss and his fellow patriots have launched on the woke left’s anti-Christian agenda is beyond impressive. Then again, this is what should happen when ordinary folks realize their country, community, and children are under siege. Why more conservatives — especially at the federal level — don’t do the same is beyond me. Voters desperately want politicians who will take on the culture war issues that the left has been pushing for years.

Despite explicitly running on their intention to institute a full-throated conservative agenda for many months, commissioners were on the receiving end of a local media temper tantrum following their meeting. One journalist claimed the community was “blindsided” by their changes.

Hogwash. Ottawa County is the most conservative area in the state, being home to Hope College and the city of Holland, which was founded by Dutch Reformers in the 1800s. It’s reliably sent Republicans to Congress for decades and is comprised primarily of Evangelicals who hold traditional values. The press and their lukewarm Republican allies that were thrown out of office by Ottawa Impact are simply furious that Christian conservatism was on the ballot, won, and is now being defended. This is simply a matter of voters finally getting what they voted for in a landslide when they went to the polls.

Former head coach of the New York Jets Herm Edwards once famously said “you play to win the game.” He was referencing the fact that you just don’t show up to the stadium to go through the motions against your opponent. You show up to defeat them. Joe Moss and his band of Christian culture warriors are giving conservatives across America a lesson in how to do precisely that at a time in our country’s history when that sort of leadership needs to happen most. Others should take note and follow suit.