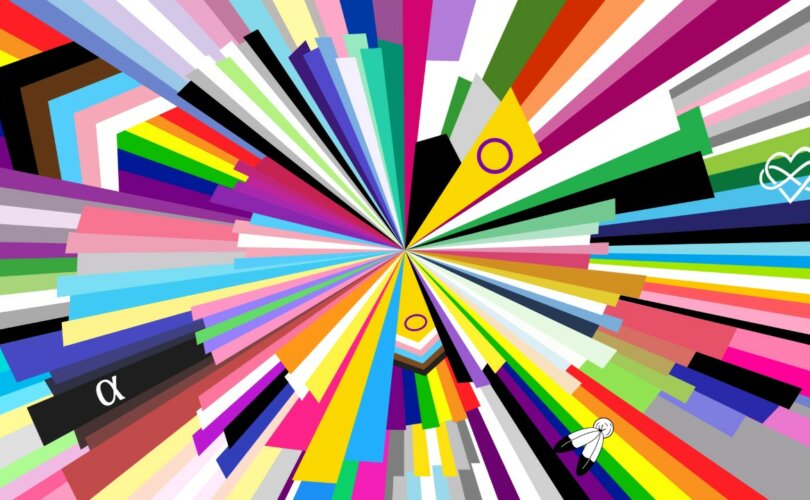 “Created by the LGBTQIA+ people at Microsoft, this flag represents 40 different individual LGBTQIA+ communities—with one powerful graphic that reflects a message of unity, solidarity and intersectionality,” explained Microsoft at github.com.

Those “LGBTQIA+ communities” include:

“It looks like a bomb going off at a pride parade,” observed Seph Pelech.

It looks like a bomb going off at a pride parade https://t.co/9cxKbAMfxD

“This is what you see while getting sucked into hell,” wrote popular Twitter commentator, Shoe.

“That’s a visual representation of a migraine,” said Homunculus.

“Which is the part of the flag that *opposes* sexualizing kids?” asked another Twitter user.

READ: Conservatism, homosexuality, and repentance: People with same-sex attraction must speak up to save America

— Article continues below Petition —
Stand with Christian daycare worker fired for refusing to indoctrinate kids with LGBT agenda
Show Petition Text
7952 have signed the petition.
Let's get to 9000!
Thank you for signing this petition!
Add your signature:
Show Petition Text

“Wow I am so happy to just be a normal person,” declared conservative commentator Allie Beth Stuckey.

Wow I am so happy to just be a normal person https://t.co/h1XmGBJPbc

“The Pride flag has had more updates than Windows, so it makes sense for Bill Gates and his team to go and give it a bit of a great reset,” suggested James Macpherson writing at the Spectator Australia.

Referring to Microsoft’s list of 40 LGBTQIA+ community identities, Macpherson warned, “I had to Google half of those identities. I’m so sorry I did. All I can say is never go full omnisexual.”

Macpherson was on a roll:

Not that it makes much difference. Don’t they realise the only identity that matters now is the T?

Despite the aforementioned shortcomings, I like the new design. It makes it appear as though all the colours are being pulled into a black hole – which would be a good start.

The Microsoft gay Pride flag is what you see when you travel at Woke speed.

While the new Pride flag – or, as I like to call it, the seizure flag – is certainly colourful, it’s going to be difficult for the Sydney Lord Mayor to have painted on pedestrian crossings.

“This is the design that represents all of America,” insisted Scott Walker, former Republican Governor of Wisconsin, posting an image of the American Flag above Microsoft’s “inclusive” flag.

This is the design that represents all of America: https://t.co/omTwGs2Jwq pic.twitter.com/YUEDkVCZkJ

While Microsoft has made its LGBTQIA+ flag design available “for everyone to use and build on,” to me this signals that our culture has reached peak LGBTQIA+ saturation and is ready to recoil.

In a way, the Microsoft flag design is a Freudian, op-art expression of what everyone who ever once watched Saturday morning cartoons will remember vividly:  Wile E. Coyote plummeting into a deep canyon after once again failing to catch the Roadrunner.

The quest of the LGBTQIA+ folks is just as impossible and ultimately fraught with as much disappointment as Wile E. Coyote’s.  Their political muscle days are numbered; Their insistence on rejecting nature and science is unsustainable.